16
SHARES
829
VIEWS
Share on FacebookShare on Twitter
One of the newest Rhinos in the Chiappa line is the Model 40DS .357 Mag, which comes with an optional 9mm conversion cylinder. The version tested here features a 4-inch barrel and adjustable sights.

Who says the revolver is obsolete? For a firearm that can trace its heritage back to at least 1836, there are still new and improved models being introduced by arms manufacturers every year. Most of these changes have had to do with construction, as frames and cylinder weights have been reduced using aluminum, titanium and scandium alloys—as well as polymer-framed revolvers. A couple of years ago the Italian armsmaker Chiappa Firearms introduced the Rhino revolver, named after the Chiappa Group owner Rino Chiappa. While it is not the first of its kind, it is the first truly successful revolver that fires from the lower chamber in the cylinder rather than from the upper chamber, as wheelguns have done for the better part of 200 years. This of course allows the barrel to be positioned lower in the frame, more in direct line with the top of the shooter’s hand, thus lowering the “bore-axis,” which helps reduce recoil and muzzle flip. This in turn assists the user by facilitating more accurate follow-up shots or rapid fire shooting if necessary. The design also incorporates ergonomic engineering so that the gun fits the average hand well, has easy to reach control surfaces and yet operates much the same as a traditional sixgun.

The first Chiappa Rhino revolvers on the scene were chambered in .357 Mag and had a short 2-inch barrel and fixed sights. In speaking with Chiappa Firearms’ U.S. subsidiary, I was prepared to wait for a later version with a longer barrel and adjustable sights. Chiappa had also hinted that there was going to be a Rhino 40DS revolver in .357 that would be convertible to 9mm Luger, which really got my attention. With a 4-inch barrel and a click-adjustable rear sight, plus brown wood grips and a matte black finish, it corresponded with my conception of what a revolver ought to look like. 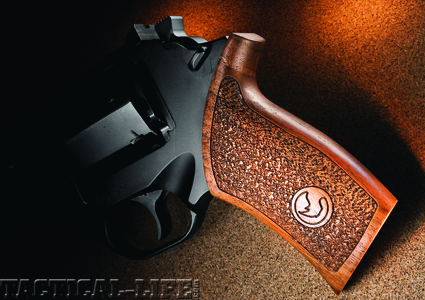 Looking just as unconventional as the rest of the revolver, the wood grips on the Rhino 40DS have a unique shape that the author liked.

The first thing you notice is the Rhino’s radical appearance. I won’t call it ugly because the beauty is in the function, but it does look like something out of a Hollywood Sci-Fi thriller. It has a rather unorthodox slab-sided appearance, which is emphasized by the six-sided cylinder that has flats where normal revolvers have flutes. The frame and integral barrel shroud, made of an aluminum alloy caller Ergal, are also flat-sided with a mixture of sloping contours at the triggerguard and topstrap. Two “vents” are formed in the upper portion of the barrel shroud and under close examination you will notice a thin line denoting the two sections that compose the shroud. It’s like they took the 2-inch gun, screwed in a longer 4-inch steel barrel tube, and then added a barrel shroud extension. That additional segment includes the front sight at the top, which has a red fiber optic post on a ramp, and on the shrouds bottom is a short Picatinny rail for mounting a light or laser sight.