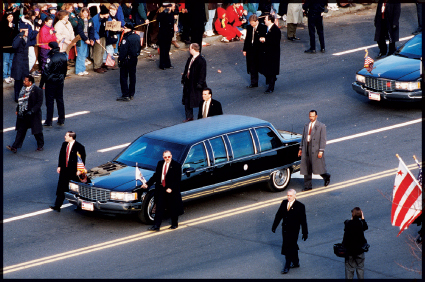 April 11, 1986— Miami, Florida: FBI Agents Jerry Dove and Ben Grogan died in a shootout with armed bank robberies with military backgrounds. Five other agents are injured and one agent escapes injury. Both suspects were eventually killed after delivering a large volume of fire against the agents, only two of which were wearing body armor.

During a collision while carrying out the car stop that preceded the firefight, Agent Richard Manauzzi lost control of his weapon and Agent Ben Grogan lost his glasses. Though Agent Grogan fired nine rounds from his Smith & Wesson M459 there is some question whether the loss of his glasses adversely affected his shooting. Grogan was known to be an excellent shooter and some questions arose about whether he might have stopped one or both of the suspects had he retained his glasses.

Any answer to that question would be pure speculation but after the Miami shootout I did change my own training and those I provided training to who wore glasses. After the Miami FBI shootout and till this day, I shoot at least once every two or three months without my glasses and wearing only clear safety glasses. I carried out this training the first time to see how I would do but have continued it specifically so that I am aware that without my glasses, I can still score center-of-mass hits on a humanoid target to 25 yards with no problem.

I want to make sure that if I lose my glasses—and working protective details and moving through crowds I have had my glasses knocked off—in a fight I won’t hesitate but will immediately engage. If I am training protective personnel who wear glasses I make them shoot some drills wearing only safety glasses for the same reason.

20/20 While Armed
There is another issue that arises among those of us who wear glasses and have reached middle age. The prescriptions often do not lend themselves to clearly seeing the weapon’s sights. I also have discovered a fix for that problem which I want to share with readers. SafeVision is an optical firm that specializes in making glasses for military personnel, law enforcement officers, and others who are armed.

SafeVision has been making prescription-shooting glasses for years. They also make what they call “reverse bifocals.” These glasses function as one’s normal glasses until it is necessary to acquire the sights on a pistol, carbine, SMG (submachine gun), or shotgun. When one goes into shooting position, his dominant eye sees the sights through a bifocal at the top of the lens. The sights are absolutely sharp.

Since glasses for those in the military, law enforcement or on protective teams also help protect the eyes, SafeVision offers these custom glasses in Wiley X or other frames. Mine are Wiley X, which are tough and look good. Another advantage for those who work in hot climates is the PAF (Permanent Anti-Fog) treatment offered by SafeVision, which keeps the glasses from fogging when entering or leaving buildings or when exerting one’s self. I also got my Wiley Xs with the breathable gasket that keeps dust out in sandy or dusty environments. It also keeps wind out, an advantage running “Guns Up” in vehicles or in other situations. Finally, I ordered one pair of glasses with transitional lenses that darken in bright sunlight and act as sunglasses.

These glasses are beneficial to my shooting without affecting my vision for normal situations. Even better since SafeVision specializes in making Wiley X and other tactical glasses, including prescription gas mask lenses for operators. They can walk customers through the process of sending a prescription and taking measurements from eye to sights over the phone. They’ve done hundreds of them this way and sent them all over the world.

Just 2 Seconds
Good vision is important for shooting and for observing, but bodyguards need to train themselves to properly observe their surroundings. When I used to do training courses with former members of the Special Air Service, they would often put trainees through observation training similar to that given to snipers. Trainees would be walked around an area, and then quizzed about various aspects of what they had just seen. When time permits, observation exercises would be incorporated into vehicle training as well.

I recently finished reading a book that is a must for anyone in close protection: Just 2 Seconds by Gavin De Becker. The book draws many useful lessons from successful and unsuccessful attacks on principals. Among these lessons are some excellent ones related to observing while guarding one’s principal.

One of these is to always look for the most likely suspects in any crowd. This technique relies on the fact that a trained bodyguard will notice individuals in any crowd, which attracts his attention. Not only does observing and identifying these persons help the bodyguards focus on the location of a potential threat but also keeps their observation skills honed.

On many protective teams, photos of known potential assassins will be studied so that team members may watch for them. And, they should, but generally observing crowds for subjects that attract the bodyguard’s attention will help avoid tunnel vision and will keep the bodyguard more alert. Just 2 Seconds also offers the advice that once a suspicious person is observed, the bodyguard can make adjustments in his position which will allow him to respond effectively.

This observation, suspicion and adjustment is fluid and the bodyguard may carry out the drill many times while moving through a crowd. Not only does this technique help identify possible threats and allow the bodyguard to prepare himself to respond to them, it also keeps the bodyguard focused on the crowd and keeps him from going on autopilot.

Just 2 Seconds offers myriad other suggestions for effective close protection, some others related to observation and mental preparedness, but covering a wide gamut of skills and attitudes. I think highly enough of the book that I am recommending to units that use my Bodyguard Manual as a training guide that they should also use Just 2 Seconds.

Final Notes
Both vision and observation are absolutely critical to be effective as a bodyguard. The bodyguard must be able to see to identify and engage a threat, but he must be able to observe to have the edge that will let him engage the threat most effectively.