NO RETREAT, NO SURRENDER
In an effort to keep in shape, I like to go for reasonably long walks/jogs around the area where I live. I am not going to say that it is an unsafe neighborhood, but it can be a little dangerous if you do not keep your wits about you. Because of this, I chose to carry a concealed handgun with me after getting a CCW permit.

To avoid any potential problems, I try to get this exercise early in the day when the sun is out, as it is easier to be aware of my surroundings and the “bad sort” tend not to be out as much then. However, a few weeks back I had missed my chance in the morning and decided to head out as dusk to burn a few calories. Unfortunately, some dangerous characters decided to join me on my walk.

After having been out about 20 minutes, I noticed group of rough looking teenagers keeping within eyesight of me as I moved along. This went on for about ten minutes, with them keeping pace with me. They then started getting closer and closer, and although I could not understand what they were saying, I could tell by the tone of their conversation they were not the “friendly sort.” After what seemed like a lifetime, I noticed that they had disappeared, so I began to let my guard down. This was a mistake that I would quickly come to regret.

Forgetting the first rule of self-defense, I forgot about them and got lost in my own thoughts. However, as I came around the corner of a building, reality came crashing back. They were standing right in front of me. They must have moved around and ahead of me and cut me off. Before I knew what was happening, the one right in front on me threw a punch at my face that dropped me to the ground.

“Give me your money!” he yelled, as he put his hand in his pocket. Even in the haze from the punch, I could see him drawing a pistol from his jacket. I immediately drew my concealed pistol and pumped several shots at him. The group immediately scattered, yelling.

I called the police and let them know what had happened, and waited for them to arrive. When they did, I was informed that they had picked up an armed and wounded suspect that fit my description of the guy who punched me. I was told that I had hit him three times, but that he would survive.

Needless to say, I was glad that I had that concealed handgun on me, and I will definitely be more aware of what is going on around me from now on!
—FG, TX 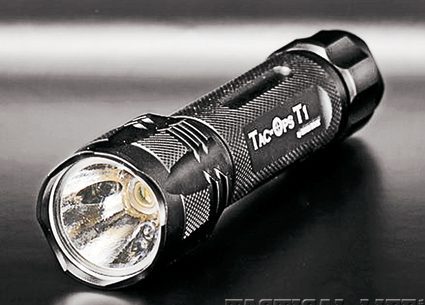 Guns and gear that caught our eye.

NO RETREAT, NO SURRENDER In an effort to keep in shape, I like to…