When I first started working on protective teams more than 30 years ago, it was relatively common to see operators using machine pistols. This was especially true of VIP drivers in Latin America and North Africa. Let me digress here for a minute to explain what I mean by “machine pistol.” These were designs that fired a pistol caliber cartridge, had either a folding stock or a detachable holster stock, high-capacity magazines, and offered select fire capability. Today, the function previously performed by machine pistols is often performed by the PDW (Personal Defense Weapon), such as the FN P90. Still, machine pistols will occasionally be encountered with some Third World teams. Former Soviet KGB bodyguards with whom I have spoken were also great fans of the Stechkin machine pistol as well.

One former Soviet bodyguard formerly assigned to various Kremlin figures and I became acquainted in Brussels where he was working for a Russian arms dealer demonstrating weapons. His weapon during his KGB days had been a Stechkin, though he told me he normally did not use the holster stock. He liked the Stechkin’s 20-round magazine capacity and he was big enough and strong enough that he could hold it on target for short bursts quite well without the stock if he needed to break an assault by multiple bad guys. In fact, on one shooting session at an indoor range in Brussels he demonstrated his technique. He set up three targets to simulate three attackers at 5, 7, and 10 yards and put bursts on each one. All 20 rounds fired were on the targets.

Holster Stock
One of the big disadvantages of the machine pistol for normal close protection usage is the holster stock, since it does not conceal well. In fact, the carry system for the HK VP70 was designed with a cross belt on the chest to which the VP70 stock could be attached. Another design, the Czech Skorpion, was relatively large and though its top-folding stock was well designed, its holster was quite large. The Beretta 93R had a skeleton stock which was detachable but took a bit of time to affix. The Beretta 93R, the HK VP70, or the Stechkin, on the other hand, could be carried in leather belt holsters, if one had them custom made, without the stock. A team could keep the stocks in the vehicle and attach them for use in the machine pistol mode if needed. Some VIP drivers drove with stock attached and the machine pistol across their lap. In some cases too, team leaders riding in the “shotgun” position in the VIP car carried the machine pistol with the stock affixed. One real advantage of the machine pistol is that it is compact enough to maneuver well in a vehicle and recoil is light enough to allow fast and steady engagement.

The Stechkin, VP70, or 93R could also be carried as high-cap pistols; then for estate, office, or residence security the stock could be attached and the weapon carried in its machine pistol role. For patrolling a building or estate, the machine pistol fits well under a jacket. Note that the VP70 and Beretta 93R are not continuous full-autopistols but have 3-shot burst modes.

Ammunition is readily available for most machine pistols, depending on one’s location. The Stechkin is chambered for the 9x18mm “Makarov” load. The VP70 and Beretta 93R take the 9x19mm round. The Skorpion is most often encountered in .32ACP or .380ACP but versions in 9x18mm Makarov may be encountered. In places such as Russia or areas formerly under Russian influence, the Makarov is the standard weapon for bodyguards, so having a couple of Stechkins or Skorpions in the same caliber could be useful.

Glock 18
Today, there is an excellent machine pistol available in the Glock 18. It can be carried much as a standard G17, but when the selector is flicked it functions as a machine pistol. I have fired a full magazine from the G18 into a humanoid target at 5 yards by holding the Glock tight and leaning well into it. I found the polymer frame seems to cushion recoil. There are aftermarket shoulder stocks available for the G18, but note that they may only be legally used on a G17 or other pistol if it is licensed as an SBR (Short Barreled Rifle).

Mostly, I am discussing machine pistols as a point of interest; however, it is certainly useful to have knowledge of them in case you find yourself working on a team that has them. Knowledge of the Czech Skorpion is useful, as well, since it will often be encountered in use by terrorists in some parts of the world. In fact, when I used to teach classes for executives or government officials being deployed to dangerous parts of the world, I tried to arrange with a Class III dealer or a sponsoring agency to have a Skorpion available so I could teach the trainees how to disarm a Tango and turn their weapon against their kidnappers should they get the chance. 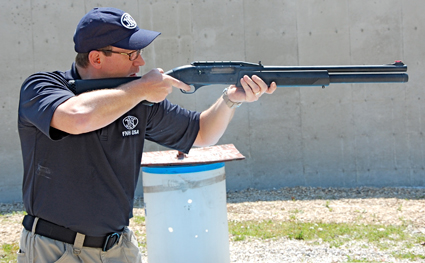 When I first started working on protective teams more than 30 years ago, it…