Cobra just introduced a new 5-shot, J-frame .38 Special revolver called the Shadow, which looks and feels very similar to the Smith & Wesson M642 alloy-framed revolver. I had a chance to handle the newest Cobra in Phoenix, and was impressed enough with its fit and finish to order one for a test and evaluation. 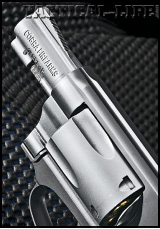 According to Bill Gentry, Cobra’s President, the Shadow revolver was introduced to meet the demand created by the concealed carry market and it is the first revolver to wear Cobra’s snake logo. “The bulk of our market is for concealed carry. Women make up a huge portion of the concealed carry market right now so we wanted to specialize a gun for women,” says Gentry. “Some women have very small hands and others have difficulties racking the slide of a semi-auto, so we wanted our first revolver to be something that a woman could pull out, point and shoot.” He says the Shadow is, “sleek and it’s hammerless so it will slide easily out of a pocket or purse without snagging. Revolvers are the most reliable of all handguns as there are less moving parts. It’s small and lightweight and should work perfectly for all women,” adding, “I’ve also started selling the Shadow to law enforcement as a back-up gun.”

Cobra builds the Shadow utilizing an aluminum alloy for its frame, resulting in the entire gun weighing less than a pound. There are no sharp edges on the Shadow and the hammerless design is completely snag-free. It’s available in three different finishes. My test sample has the Titanium Anodized finish, silver in color with a slight pink hue to it. Also available is the Black anodized frame with the contrasting stainless cylinder and barrel and the Pink anodized that also has the silver colored cylinder and barrel. Black synthetic grips come standard, though optional rosewood grips are available.