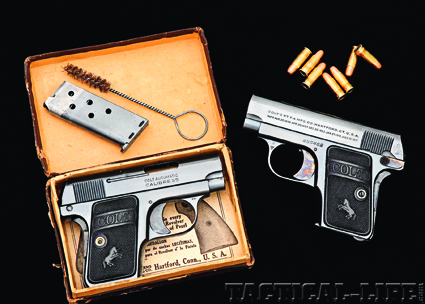 The Colt’s Model 1908 came in a brown, pasteboard box, with an extra mag and cleaning brush.

The Old West as we think of it today was still very much alive when the calendar rolled over to 1900. In fact, even into the late 1920’s there were parts of Oklahoma, Wyoming, and particularly areas along the Texas, New Mexico, Arizona and Southern California borders with Mexico that hadn’t changed much since the 1880s. Guns, on the other hand, were changing faster than you could say autoloader. In the late 1890s there were already a handful of European semi-automatic pistols in use and by the end of the first decade of the 20th century a cowboy or lawman was just as likely to be packing an autoloader as a Colt Single Action Army or Smith & Wesson revolver. Thanks to America’s most prolific arms designer, John Moses Browning, by 1911 Colt’s had become one of the world’s leading manufacturers of semiautomatic pistols as well.

History
Browning had been responsible for one of the earliest small caliber autoloaders to find favor with lawmen, the Belgian-manufactured FN Model 1900, chambered in 7.65mm (.32 ACP). In 1903 Browning added to the Colt’s inventory with the compact Hammerless 1903 Pocket Model, chambered in .32 ACP, and five years later, the 1908 Pocket Model chambered in .380 ACP (a cartridge that Browning was instrumental in developing), and the smaller 1908 Vest Pocket Model designed to carry a total of seven .25 ACP, (6.35mm), cartridges, a new caliber developed in Belgium by Browning and FN1. This new autoloader offered the compactness of a small-caliber .32 S&W revolver but with the safety, swiftness and capacity of an automatic—a marvel of a gun and at a time when autopistols were rapidly gaining in popularity.

Because of its compact dimensions, small enough to conceal almost seamlessly within a coat or pants pocket, Colt’s Hammerless .25 ACP became a popular backup gun with police officers, detectives, and other plainclothes law officials. Its popularity soared during the 1920’s and 1930’s, and it remained in production up until 19412 by which time over 409,000 had been sold, including several thousand purchased by the Ordnance Department. These rare examples are distinguished by the words “U.S. PROPERTY” stamped on the right side of the frame, above the triggerguard. The remaining 406,061 examples found their way into gentlemen’s waistcoats, ladies handbags, bureau drawers, and the pockets of lawmen from coast to coast and across two continents.

When the .25 Hammerless was introduced in 1908, the design was already well established in Europe, having been manufactured by Fabrique Nationale (FN) in Belgium since 1905 as the Model 1905-FN 6.35mm pistol. After licensing the design to Colt’s in 1908, the guns remained in production for another 33 years, during which time the Vest Pocket Model became the third most successful Colt semi-automatic ever built, surpassed in sales only by the Model 1911/1911A1, and .32 ACP Model 1903 Hammerless. 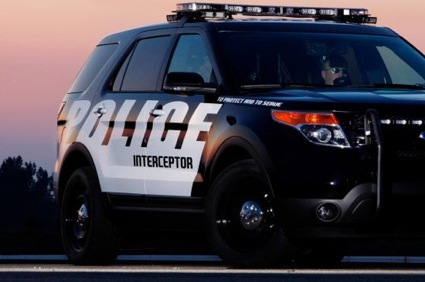 The Colt’s Model 1908 came in a brown, pasteboard box, with an extra mag…