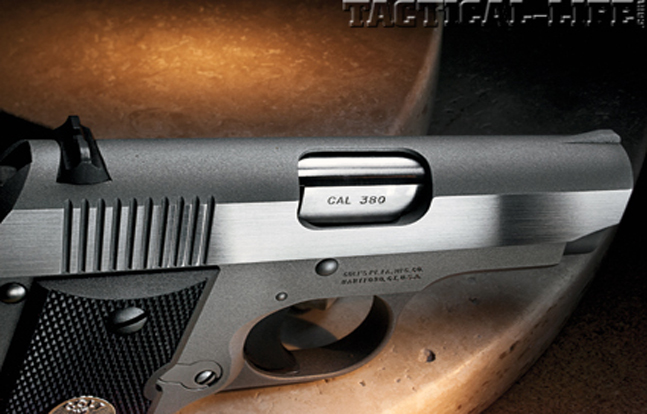 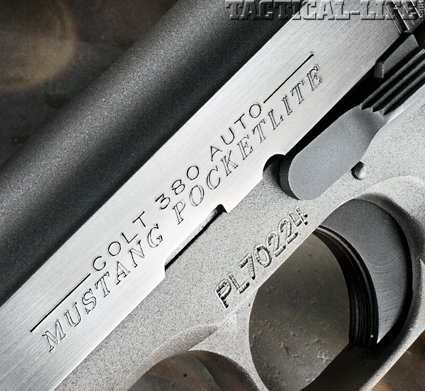 In Samuel Colt’s lifetime his guns always bore simple names; Paterson, because the first Colts were manufactured in Paterson, New Jersey, and sub-classifications such as Holster Model or Belt Model. The first use of an individual’s name was in 1847 as a posthumous tribute by Colt to honor fallen Texas Ranger Captain Samuel Walker, who had collaborated on the design of the .44 caliber Model of 1847 Army Pistol made famous during the war with Mexico.

Aside from that exception, Colt generally gave his guns numerical designations based upon the year in which they were introduced and caliber: .44 for Army, .36 for Navy, or by size, such as the 1848 Pocket Revolver. There is one other notable exception, the entire line of .44 caliber revolvers produced after the Walker, all known as Dragoons in honor of the U.S.M.R. (United States Mounted Rifles). Colt’s personal naming process accounts for popularly known examples like the 1851 Navy, 1860 Army, Pocket Model of Navy Caliber, and Pocket Police.

It wasn’t until almost a decade after Sam Colt’s death that the company again used an individual’s name to designate a new model, and as before, it was that of the designers: Alexander Thuer, C.B. Richards, and William Mason, respectively. The first use of a popular name didn’t occur until the 1873 Single Action Army picked up the catchy epithet “Peacemaker.” In 1877 Colt took the idea to heart and introduced a double-action Colt named Lightning; in 1894 the Bisley target model; and by the early 20th century the New Service, Police Positive, Banker’s Special, Detective Special, and Woodsman, all now legendary names. The Colt play on the “horse” theme didn’t come along until 1986, for a little .380 auto named the Mustang. 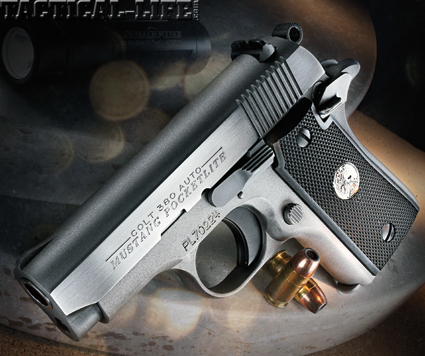 A dozen years after being discontinued the Colt .380 Mustang Pocketlite is back. Reengineered to new standards combining an aluminum alloy frame and stainless steel slide, the Pocketlite falls right into the heart of the current CCW trend for small .380 ACPs.

Small, lightweight and carrying six rounds of .380 ACP, variations of the Mustang were manufactured until 1999, including the original Pocketlite. Although often regarded as a sub-standard round for self-defense, the .380 ACP has nevertheless managed to prevail as a staple in self-defense sidearms for more than 100 years and recent improvements in both bullet design and ballistics have increased the velocity and terminal performance of .380 ACP ammunition, making the cartridge a viable option for today’s self-defense and concealed carry use.

As it turned out, Colt was the first American armsmaker to see the wisdom of building a pocket-sized .380 ACP. Unfortunately, the company was well ahead of the curve for popular demand and had discontinued the gun a few years before the current CCW trend emerged in the early years of the new century. With the Colt’s Manufacturing Company celebrating its 175th anniversary in 2011 it was determined that the originator should get back into the game and an improved Colt Mustang Pocketlite is now available.

With a loaded magazine the new Mustang Pocketlite weighs less than a pound. It measures 5.5 inches long, including the gun’s extended beavertail, with a 2.75-inch barrel. The minimal weight and length of the gun, combined with the short single-action trigger, proven frame and grip design, and firing pin safety block, make this an ideal small caliber handgun for personal protection and concealed carry. The magazine holds six rounds, so capacity is seven with one in the chamber, and cocked and locked, just like a Model 1911. Additionally, the Mustang Pocketlite does not use a magazine disconnect, so it will fire a chambered round even with the magazine removed. 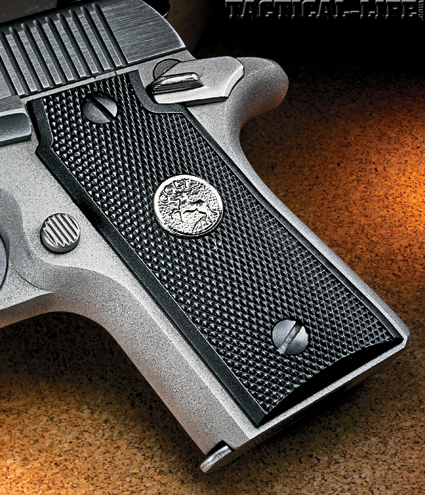 The lightweight aluminum frame of the Pocketlite features a matte nickel finish.

This latest version of the classic .380 Colt looks and feels different with an overall superior fit and finish, particularly the slide to frame fit. But what is most noticeable is the contrast between the stainless steel slide and the matte, bead-blasted appearance of the aluminum alloy electroless nickel frame. The side panels of the slide and its nine rear serrations are all polished bright, as is the hammer, while the thumb safety, slide and magazine releases are a matte finish to complement the top of the slide. It is a handsome and durable combination that offers both style and serviceability for concealed carry.

While some regard the Mustang as a scaled down Model 1911, it is only partially so, because the .380 uses a solid camming lug barrel system in place of a traditional 1911-style swivel-link, and a direct barrel/frame interface rather than a barrel bushing. The Pocketlite also has one other distinctive difference, a thumb safety that allows the slide to be manually cycled even when the safety is set. This permits checking for a loaded chamber, clearing the gun or loading the first round with the safety engaged. If the hammer is down on a loaded (or empty) chamber and the thumb safety is set, the gun will not cock but the hammer will move back into a half cock notch and stop. Releasing the thumb safety will allow the hammer to be fully cocked. The Colt design uses a firing pin safety block to prevent accidental discharge. 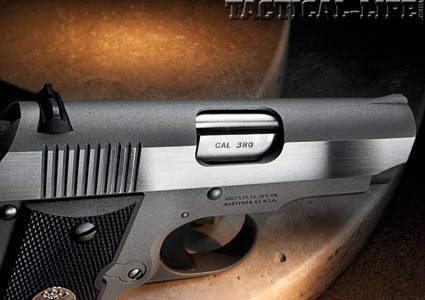 There is a stylish contrast between the stainless steel slide and the aluminum alloy electroless nickel frame.

The Pocketlite has a very solid feel in the hand, more so than .380’s with a polymer frame. While this adds a little overall weight, the heft makes the Mustang substantial in terms of grip and recoil management. The large 1911-style thumb safety is very easy to release on the draw and has a positive lock that you can feel and hear when pushed upward into the locked position, or when thumbed down to release. The latter, however, is a bit of a “tell” to anyone within earshot. While there is ample triggerguard room to move the index finger in and out without brushing against the trigger, this would not be the case if wearing a glove, and greater care is necessary. When gripping the gun the little finger wraps easily under the magazine floorplate for support.

Trigger pull on my test gun averaged 4.7 pounds with 0.19 inches of take-up, no stacking, very slight overtravel and quick reset, all characteristics of a well-engineered trigger system. For ease of function, getting the Pocketlite into action is almost seamless from the time you wrap your fingers around the grips. The large, round knurled hammer spur is easy to thumb back, the slide release is firm but drops with modest pressure on the reload, and recoil spring tension for chambering a round or clearing the gun is comparatively light. The face of the slide is also of sufficient surface area to make cycling the action against a flat-edged surface, or even the heel of one’s shoe, easy enough in a situation where one-handed operation might be critical. These are all pluses for a defensive sidearm.

With a consistent trigger pull of 4 pounds and change, short take-up and quick reset, rounds fired at 1-second intervals struck consistently just above point of aim from 21 feet (7 yards) on a Speedwell B-27 silhouette target. Recoil from all three types of ammunition fired was modest allowing quick follow-up shots. The greatest issue found with the Mustang is reacquiring the front sight after recoil, which against a dark background, like a B-27 silhouette, isn’t that difficult as the light colored sight is in stark contrast, but against a lighter background it would not be nearly as easy to do. The best accuracy came with Hornady Critical Defense 90-grain FTX, which cleared the Colt’s barrel at 930 feet per second (fps), placing five rounds at 1-inch in the ten-ring at 5 o’clock (three overlapping), followed by a nearly identical group at 3 o’clock in the nine-ring at 1.2 inches with Federal Premium 90-grain Hydra-Shok traveling downrange at 908 fps. The largest of the noted groups was the Sellier & Bellot 92-grain FMJ, which cleared the traps at 845 fps while placing five rounds at 2 inches in the X.

Overall the Pocketlite is a very undemanding gun for concealed carry use. Its operation is uncomplicated and easy to master. And that, in the end, is what you expect from a Colt. What most folks don’t expect, unless they know Colt history, is that this isn’t the latest in .380 pocket pistols—this is the original .380 pocket pistol. For more information, call 800-962-2568 or visit coltsmfg.com. 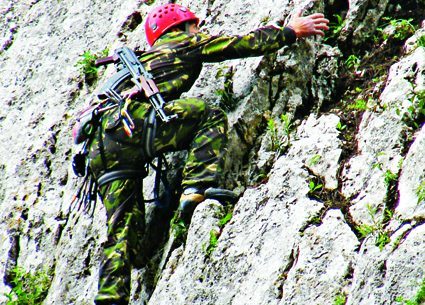