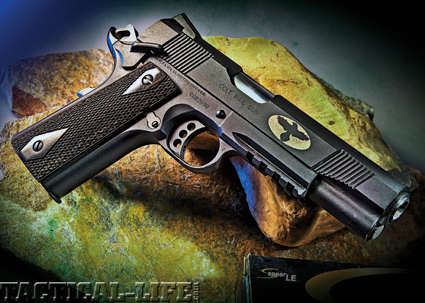 The Rail Gun 1911 in .45 ACP from Colt combines classic design features with a number of contemporary enhancements—such as its accessory rail—to deliver a top-of-the-line fighting 1911 handgun.

There is no getting around the fact that Colt has kept a relatively low profile on the commercial gun stage during the last decade or so. Their military/government contracts so overshadowed the citizen/civilian market, that countless shooters simply stopped seeing Colt products at their gun shops.

But it would appear that this apparent sabbatical from the commercial gun market has thankfully ended, as Colt Manufacturing Company has several interesting products to offer the American gun buyer. I was witness to this fact during an event held at the Gunsite Academy outside of Prescott, Arizona. It was fitting that Colt would choose Gunsite for the venue, as they have such a history together. Few people were been bigger proponents of the Colt M1911A1 pistol than the late Colonel Jeff Cooper. Colt has been producing a special Gunsite Model .45ACP pistols for many years now.

Gun Details
During my time in Arizona I had the opportunity to work with the Colt Rail Gun. This pistol is essentially a full-sized M1911A1 .45 ACP handgun with an M1913 Picatinny rail machined into the dust cover of the frame. Understanding that many modern shooters desire a pistol that will accept rail-mounted accessories, Colt has developed three versions—a stainless steel, a black Cerakote and two-tone models. 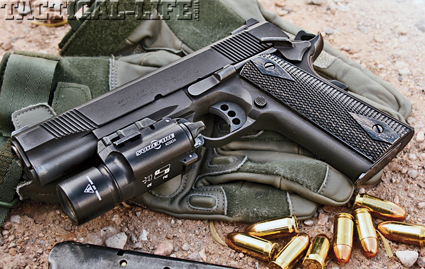 The author had the opportunity to run the pistol through a punishing course at Gunsite Academy. Shown equipped with SureFire X300 WeaponLight. Paul Markel Photo

Before we go any further, let’s talk specifics. The Colt Rail Gun is based upon a full-sized Series 80 M1911A1 pistol. The barrel is five inches long and is supported by a standard buffer and plunger combination. An original design recoil spring and guide are used. This handgun is built with steel forgings including the slide, frame and slide stop.

The Rail Gun operates on the same single-action principle that made the M1911A1 famous. Manual controls consist of a three-hole aluminum trigger, an ambidextrous, extended thumb safety, Smith & Alexander upswept grip safety with palm swell as well as a standard configuration magazine release and slide stop.

Forward and rear cocking serrations are found on the slide. From the factory this pistol comes standard with Novak 3-Dot “Carry” sights. The model I used was adorned with XS 24/7 Big Dot Tritium sights. On the right side of the slide just forward of the ejection port you’ll notice the silhouette of the Gunsite Raven. This special marking was put on a limited number of black Rail Guns to commemorate the event.

Down on the frame, the grip panels are double-diamond, checkered hardwood and blackened to match the finish of the gun. A mil-spec accessory rail is machined into the dust cover of the frame and a flat mainspring housing is used. The pistol is actually a stainless steel model with the Black Cerakote finish applied. Each pistol is shipped in a padded, lockable hard case with owner’s manual and two 8-round magazines. 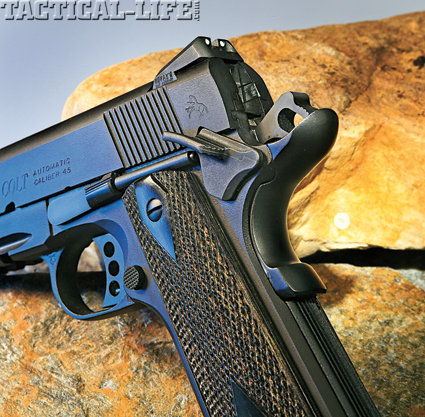 Shooters will appreciate the wide beavertail grip safety, while the skeletonized trigger and hammer do their part to produce a wonderful trigger pull.

The Rail Pistol features numerous modern enhancements such as forward cocking serrations on the slide and an integrated rail on the dustcover.

Range Time
Gunsite is rightfully considered a “gun guy’s paradise.” Not only do they have the requisite square range facilities, but they also offer indoor and outdoor simulators and challenging courses—such as their famous “Scrambler.”

After our welcome aboard and safety briefing, we all moved down to the Hanneken Range. One of several Gunsite ranges, this one was named after Herman H. Hanneken, USMC a Medal of Honor recipient. He was awarded the MOH and Navy Cross for extraordinary heroism and leadership during hostilities on the island of Haiti in 1919.

Legend has it that 2nd. Lt. Hanneken was able to infiltrate the camp of heavily armed bandits and kill the bandit leader Charlemagne Péralte. As the story is told he walked right up to the head bandit and shot him dead with his M1911A1 service pistol. Five months later he killed Péralte’s successor. There we were, under the bright Arizona sun with the spirit of that legendary Devil Dog watching over us as we worked with brand new Colt M1911A1 pistols.

Galco provided holsters and magazine pouches for the pistols. With a SureFire X300 weapon light mounted to my Rail Gun, I needed a special holster and found what I needed in black leather, thumb-break holster. To feed our pistols, we would use the Winchester USA Brand 230 grain FMJ .45 ACP loads.

Day number one on the range began with the basics, as all good training does. We took the time to get used to the equipment with slow fire drills. It didn’t take long before we were all ready for more challenging drills. By dinnertime I’d run several hundred rounds through the pistol and was looking forward to the evening activities.

After the sun had set we divided up and moved to the indoor simulators. These are shoot houses that can be altered and modified to create various MOUT (Military Operations on Urban Terrain) scenarios. Using my Colt Rail Gun with the SureFire X300 WeaponLight I negotiated the indoor simulator engaging various “shoot/no-shoot” full-color targets.

This is definitely an adrenaline pumping experience, even for those who have run such scenarios before. Normal daylight is stressful enough; adding the darkness factor only increased the realism and adds to the training.

Before our time at Gunsite was up, I’d use the Rail Gun to engage steel targets from 35 yards and in. We shot steel plate racks, ran stoppage and reloading drills. In the accuracy department, the pistol was right on. 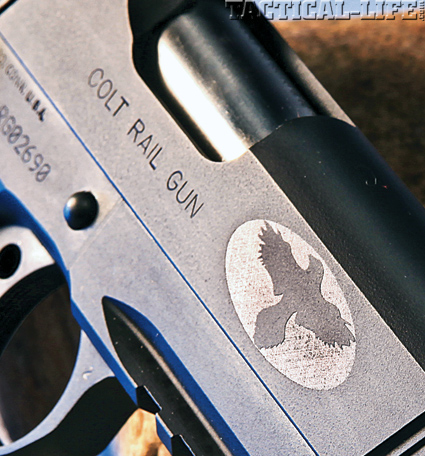 Final Thoughts
After the first session the gun seemed to be running a bit sluggish. It was very dry out and a generous application of gun lube did the trick. In all I’d say I ran several hundred rounds though the pistol during the event. I cannot recall a stovepipe stoppage or other such malfunctions with the Rail Gun. Somewhere between one and two hundred rounds I noticed the grip screws coming loose, but a flathead screwdriver fixed that issue. If the gun were mine to keep I would definitely put thread locker on the screws.

The S&A grip safety worked exceedingly well and I could not recall a time, even during rapid presentation drills that I ever “missed” the grip safety and had to reacquire my grip. Ambidextrous and/or extended thumb-safeties are not really my cup of tea and I can do without them. Other folks seem to desire that option. For my money the “tactical” single-sided thumb safety is where it’s at.

There was never a doubt that the Colt pistol was a quality item and extremely well built. That should be a given. Colt knows how to build guns—they just haven’t been building enough of them lately. Luckily for us gun people, it is apparent that they are dedicated to building guns for the American consumer. 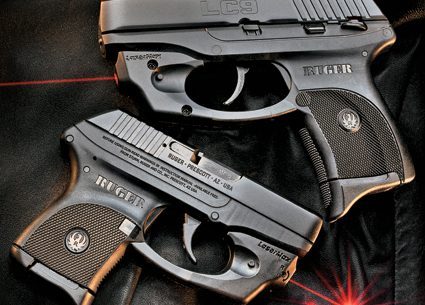 The Rail Gun 1911 in .45 ACP from Colt combines classic design features with…