0
SHARES
15
VIEWS
Share on FacebookShare on Twitter
Colt’s Tier III Anniversary Model is a faithful reproduction of the Model M1911 as originally produced 100 years ago. While the gun has come a long way, even in its original guise, the big .45 is still a formidable weapon.

It’s a big year for the 1911 pistol. From back-to-the-basics early guns by the major manufacturers to handcrafted works of art from the custom pistolsmiths, the 100th year of the .45 ACP is bringing out the best in the world’s armsmakers—each striving to produce guns that encapsulate the first century of the pistol’s existence. No doubt, we’ve come a long way from the day when John Moses Browning stood, anxious yet confident, as his creation digested 6,000 rounds without a malfunction to win the Army trials and become the first issue autopistol. 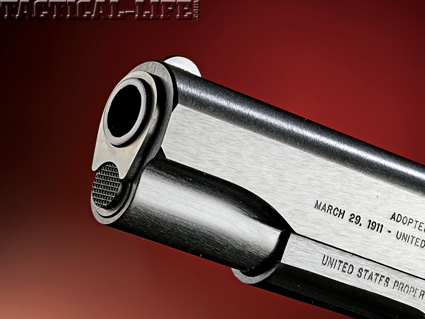 While some now prefer bull barrels that eliminate the traditional bushing system, the removable bushing makes for easy takedown, and is easily replaced in the field.

While eventually supplanted as the issue military pistol after three-quarters of a century in service, modified versions of the M1911 still reside in the holsters of elite law enforcement and military units. It’s also the undisputed king of competition pistols, and countless civilians rely on it for personal and family protection. We can now pick from M1911’s in .22 LR, .22 TCM, and .30 Luger all the way to the .45 Super, .460 Rowland, and .50 GI, in materials that include stainless steel, aluminum, polymer, and titanium. Virtually every major firearms maker in the world produces their version of the M1911—including long-gun stalwart Remington.

It was not always this way. In the beginning, there was simply Colt. While John Browning designed many guns for many manufacturers, as a rule, his pistol designs were later manufactured and marketed by Colt and overseas by Fabrique Nationale. In the U.S., once the pistol was adopted by the military, Colt had to share some of the production with the government arsenal at Springfield.
Guns were built differently in those times—the original directions for heat-treating the magazines included using gasoline and whale oil—and such were the tricks and tweaks involved that even with the official blueprints, the government arsenal still couldn’t make an M1911 that worked until some of the Colt technicians came over and let them in on the alchemy. A century later, there are still many who feel that Colt makes the best M1911. 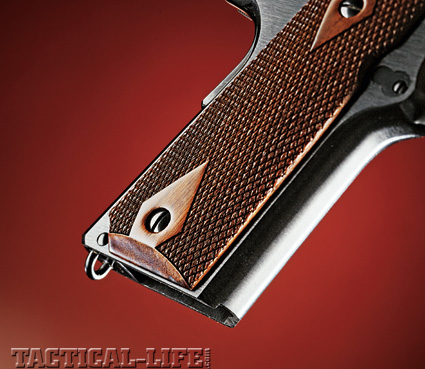 The Anniversary pistol comes with a smooth frontstrap, double-diamond checkered wood grips, and a lanyard loop. This is an old school M1911.