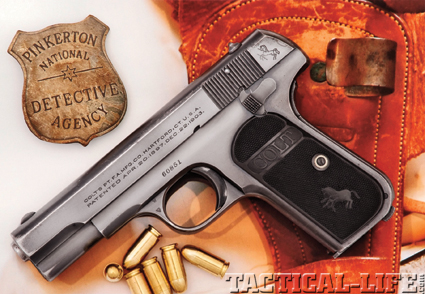 In the waning days of the Old West the six-gun was still king, but the Colt’s semi-auto was clearly heir-apparent by the early 1900s. Lawmen and outlaws alike were beginning to embrace the advantages of the easily carried Colt Hammerless pistols.

While we regard the .380 ACP Pocket Pistol as a contemporary 21st century design, the very first .380 Hammerless Pocket Pistol was manufactured in 1908 by the Colt’s Patent Fire-Arms Mfg. Co. of Hartford, Connecticut. And as with so many legendary American rifles, shotguns, and pistols, it was designed by John Moses Browning. The actual concept of the semi-automatic pocket pistol began with Browning in the late 19th century and his first .380 design (and its .32 ACP Model 1903 predecessor) are both stamped with the patent date Apr. 20, 1897. Yes, the semi-auto Pocket Pistol was invented in the 19th century.

Throughout the mid 19th and early 20th century, John Browning was the most prolific arms designer in America, and perhaps the world. While much of his work was for Winchester—a litany of famous repeating rifles and shotguns—Browning’s work for Colt’s is no less historic. His name can be found on the design for the most famous semi-auto ever built, the Colt Model 1911. But years before the great .45 ACP, his advances in handgun design, and the cartridges they fired, were establishing new standards on both sides of the Atlantic. 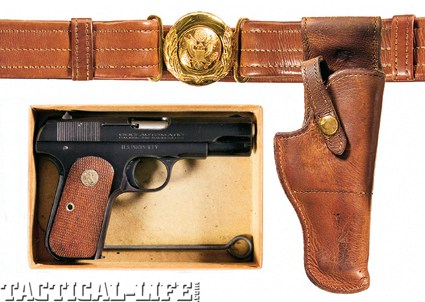 Colt 1903 and 1908 pistols issued to officers during WWII were stamped “U.S. Property” on the right side of the frame, and had an “M” prefix to their serial numbers. Photos courtesy Rock Island Auction Co.

Early Beginnings
His work with “self-loading pistols” began in 1889. Although his first semi-automatic pistol was a bit awkward in its operation, it established the basic platform for nearly all of the pistols that would follow in the early 20th century. Browning had a business relationship with Fabrique Nationale in Belgium, which manufactured many of his early semi-auto designs, including the celebrated FN Model 1900 chambered in 7.65mm. Between 1900 and 1914 FN manufactured 724,500 FN Model 1900s, one of which became the sidearm of Cheyenne, Wyoming Sheriff Richard Proctor, who assisted in the arrest, incarceration, and execution of Tom Horn. 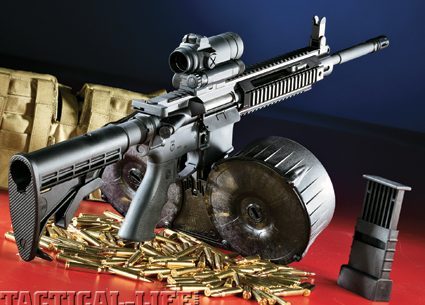 In the waning days of the Old West the six-gun was still king, but…