0
SHARES
1
VIEWS
Share on FacebookShare on Twitter
“Tactical gear, specifically vests, scream gun.” If I’ve read this once I’ve read this a hundred times and I’ve heard it repeated even more often as unassailable “wisdom.” Nonsense. People see what they expect to see. Contrary to “what everyone knows,” very few look to see if someone is wearing a concealed handgun. And most folks will not acknowledge to themselves, let alone anyone else, even if they do see a gun peeking out from concealment. What they will notice is anyone who appears to be “different.” If you have many exposed tattoos, multiple and visible body piercing or are wearing hip hop clothes, read no further, as you are doing what you want, standing out almost anywhere. 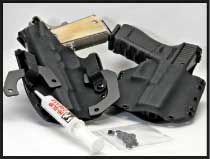 For the legally armed, blending in is survival camouflage. As far as the so-called “vest problem,” if this bothers you, well then add some camouflage such as an easily visible fishing license. Now, with this one button or piece of paper, you become one of the good guys. I’ve had more than a few folks, seeing me with a vest on, say something to the effect of, “How are they biting today?” and, “I wish I could go with you.” These all happened, by the way, while I was wearing my best vest, a well-tailored Orvis vest without an overabundance of pockets, some of which are trimmed with leather. Also, as you go over your choices of outerwear, don’t overlook the gun or law enforcement logo clothing, particularly those ball caps which are quite often very prominently so marked.