This is the name of a new book by Christopher Grosz and Michael Janich. If you carry a knife for self-defense, you need to read this book. If you are an instructor who teaches how to use a knife as well as how to counter an edged weapon, you need to read this book. If, like me, you are always on the lookout for techniques that are easily learned and applied under stress by the non-martial artist to end a fight as quickly as possible, you need to read this book. Thanks to the intensive research the authors conducted for the book, it presents clarity and focus, an unarguable combat logic, if you will, that should make it the standard reference for contemporary edged weapons training. And as such, it is a fitting tribute to Christopher Grosz, a Littleton, Colorado police officer who passed away during the book’s preparation.

As part of a research project on defenses against edged weapons, Grosz compared Fairbairn’s “Timetable of Death” against current medical knowledge and found some major discrepancies. Fairbairn originally published this chart in his 1942 book, All-In Fighting. The chart of all the major arteries in the human body is accompanied by a timetable that shows how quickly your opponent will lose consciousness and expire when you cut one of these arteries. Grosz found that Fairbairn’s times were way too optimistic and this study will offer a possible explanation as to why. To help him with his research for this work, Grosz enlisted the services of Michael Janich, a well-known authority on knife combatives, and Dr. Michael Doberson, Medical Examiner for the Arapahoe County Coroner’s Office of Littleton, Colorado.

Janich notes in the book that he had frequent discussions with Col. Rex Applegate on the combative use of edged weapons, edge-weapon design and the knife tactics taught by both Fairbairn and Applegate during WWII. During one of these discussions Applegate demonstrated his technique to Janich who told the Colonel it seemed very basic to him. Applegate replied, “The movements were only half of the equation. The other half was the targeting and expected effects of that targeting.” To me, that is probably the simplest way to explain what all any sort of extreme close quarters combat system should be. Like I said, lots of clarity and focus.

So for starters, this book will give you an updated “Timetable of Death,” based on current medical knowledge. But thanks to the superb research done by the authors with the assistance of Dr. Doberson, the truly noteworthy contribution of the book is in the findings they present on a much more comprehensive target list. These are each discussed in detail and rated for their ability to quickly incapacitate an attacker and end the fight. This is what makes this book a benchmark in the body of knowledge available to us today on defensive/offensive knife use. Knives are generally not noted for their “stopping power,” a point that this book makes clearly and graphically. However, their expanded target list has the potential to change this.

The new list contains five target areas in addition to the arteries or vascular ones that Fairbairn used. The new areas are:

Distraction: Targets most accessible to an attacker such as the hands.
Nervous System: Includes the brain and spinal cord.

Structural: Targets include strategic joints and associated connective tissues that support joint movement, “This is one of the quickest and most effective means of disabling an attacker.”

Organs: “Incapacitation due to injury to the organ by an edged weapon is highly unpredictable.”

Muscular: “Of all the categories of targets, muscular targets have the least chance of lethality yet one of the highest probabilities of immediate incapacitation.”

So, basically, Contemporary Knife Targeting reminds us that “hamstringing” your assailant is the quickest way to allow you to dominate an encounter where you must use your knife. Certainly nothing new here but it seems to frequently get lost in the message of a lot of books and videos on the subject as well as most of the training I’ve attended. Since we’re talking WWII, let’s look at a couple of well-known texts from that time and see what they have to say on the subject. In Applegate’s classic, Kill or Get Killed, he tells us, “The slash attack can be used to effectively sever the tendons on the inside of the wrist… A slash renders the hand useless.” In The Fighting Knife, by W.D. Randall, Jr., a “hand cut” is a slash to the body done with the edge of the knife. They are considered, “the most important part of a knife fighter’s arsenal of tricks… Frequently a well-delivered cut to the arm or leg will sever the tendons and cripple your opponent.”

Grosz and Janich call them “Speed Stops” and consider that slashes, which attack structural and muscular targets, give you the best chance of quickly incapacitating an attacker. Consider also that those targets (on your attacker’s arms), according to Dr. Doberson, are the only targets that remain at approximately the same depth under the skin, regardless of the size and body weight of your assailant. They are likely to be the least protected areas on your opponent and are vulnerable to the short blade typically found on the fighting folders so popular these days. This all makes me believe “Speed Stops” could be the basis for a really simple, effective, down-and-dirty program of instruction on weapon retention using a knife and Janich demonstrates a simple technique for this in the book. Interestingly enough, he uses a fixed blade knife in the photos, which makes perfect sense to me. If you have ever seen “South Narc” do his thing with a small fixed blade carried close to the center of the body, you know what I’m talking about. The move is just a blur, powerful and almost impossible to block, end of story. John Benner’s TDI knife, especially the larger version, looks to be about perfect for performing a quick “Speed Stop,” allowing you to hang on to your handgun.

I would sure like to see my old outfit take advantage of the message that Contemporary Knife Targeting gives us. Nothing much has changed since the OSS conducted operations in enemy territory. Today’s intelligence officers are as likely to find themselves in a situation where their knife is the only fighting tool available, as were their earlier counterparts. I know of several situations during my time when a good knife backed up by the ability to quickly disable your assailant and the willingness to do so without hesitation could have made a difference.

Grosz, Janich and Dr. Doberson have done a superb job with this book. I am sure Fairbairn would be proud of their efforts and would probably take the opportunity to remind us regarding these targets, “Don’t bother about their names as long as you can remember where they are situated.” 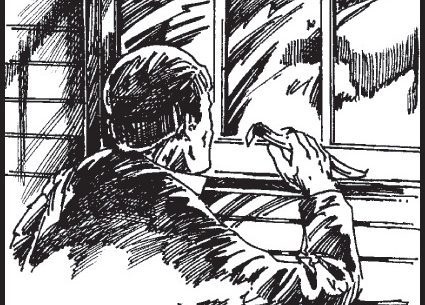 How Not to Greet a Burglar

This is the name of a new book by Christopher Grosz and Michael Janich.…