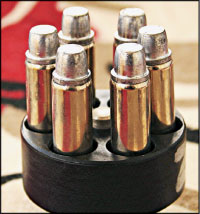 Since it first appeared in 1935, the venerable .357 Magnum has garnered a reputation for power, penetration and accuracy. In fact, generally speaking, it’s considered one of the most accurate handgun cartridges ever developed. Its power, too, is nearly legendary, and with good reason. From a 6.5-inch barrel, its original loading punched out a 158-grain bullet at a sizzling 1500 feet per second (fps). Douglas Wesson wasted no time in taking it on an Alaskan hunt, bagging a number of critters, and even a polar bear, using an 8.38-inch barreled Smith & Wesson M27. 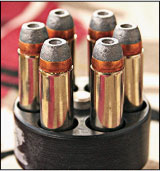 However, such power also meant that weapon controllability quickly became an issue. The original .357 Magnum, the S&W “Three-Fifty-Seven” (later renamed the Model 27) was based upon the heavy S and later N-frame and presented very few control problems. This changed in the early ’60s and ’70s when the lighter K and L-framed versions appeared. Recoil with full .357 loads in these guns was very sharp, to say the least. 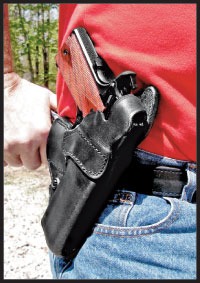 Since it first appeared in 1935, the venerable .357 Magnum has garnered a reputation…