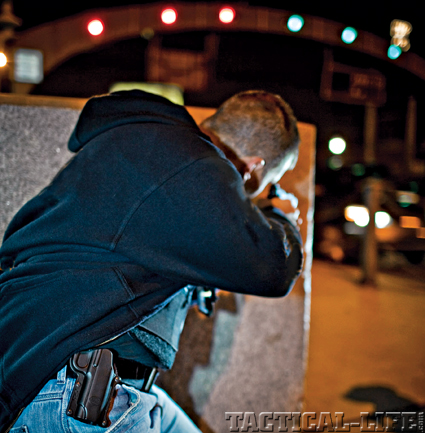 A heavy-duty stone or marble block easily qualifies as true “cover,” offering both concealment and protection. The same cannot be said of a simple drywall interior surface.
Comment(s)

One of the very first lessons I learned regarding combat shooting was to, “be cover-conscious.” During a four-day Defensive Pistol course back in 1986, instructor John Farnam constantly reminded us that we must constantly be aware of potential cover.

Being cover-conscious also plays into one of the most important factors in a gunfight—don’t get shot. Not to deliberately oversimplify the topic, an important question regarding defensive shooting is this: Which is more important, shooting the bad guy or not getting shot?

Of course the correct answer is “not getting shot.” This answer stems from the reality that firearms, particularly handguns, have no magical properties and do not operate as they are portrayed in the movies. Bad guys don’t fly through the air and become inanimate objects the millisecond a bullet strikes them. In fact, it’s actually quite the opposite.

Quite often a determined, drugged, agitated or purely adrenalized felon will not even be aware of the fact that he has been struck with projectiles from righteous good guys. One of the greatest examples of this was the FBI Miami Shootout in April, 1986. Two hardened felons were struck multiple times with handgun and shotgun rounds. They not only kept moving and trying to escape, one of the felons, Michael Platt, killed two FBI agents and wounded five others—after he had taken a pistol round to the chest. No, neither felon in this case was “hopped up on drugs.” The toxicology report showed no chemicals in their systems. They were purely evil.

Concealment Vs. Cover
Concealment is exactly what it sounds like. Concealment “conceals” you from the view of the bad guy. Any object that prevents the enemy from seeing you is technically concealment. A thick bush could be concealment. For that matter, a closed set of window blinds also qualifies. The problem arises when the good guys confuse concealment, a.k.a. not being seen, with cover.

Cover is any material that can reasonably be expected to stop the travel of a bullet fired from small arms such as handguns, shotguns, and rifles. Cover will consist of hardened, thick, bulky material and manmade structures.

Typically in the military, cover is constructed by soldiers who fill hundreds of sandbags and stack them several layers thick. Sand, dirt, gravel etc. are excellent materials for bunker building. In the civilian world, brick and mortar, cinder blocks filled with poured concrete and heavy wooden timbers are all considered good cover. 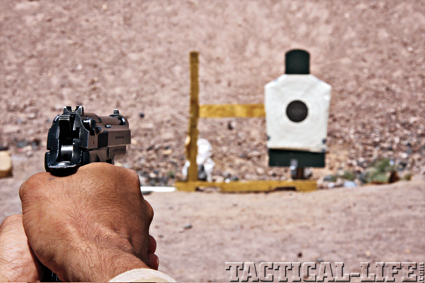 One of the very first lessons I learned regarding combat shooting was to, “be…