It was a while ago, but most revolvers used to come out of the factory box with fixed iron sights. Particularly in the pre-war era, both of the major revolver makers had yet to develop rugged and adjustable revolvers sights that were up to the rigors of hard service in a field holster. This began to change in the ‘50s when Smith & Wesson and Colt both developed good sights that were click-adjustable for both elevation and windage. Even then, a great many police departments chose the economy of an S&W M10 over an adjustable-sighted M15 or M19. If they were Colt folks, it was an Official Police over a Trooper. Generations of shooters learned to shoot with Kentucky windage. Some handgunners of those days settled on a particular load, then filed, bent or otherwise modified their sights to produce a point-of-aim, point-of-impact situation. There was then a better way to get it done, but the device that made it possible was not as well known as it should be. It was called the FDL Wondersight and was best known in the ‘50s and ‘60s. 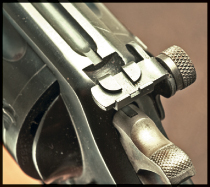 To my considerable astonishment, I recently stumbled on the fact that the Wondersight is still in production. Available from a small firm, these newly made units are just like the mid-century product. In essence, the FDL Wondersight is a simple way to put adjustable sights on a fixed-sight gun. On most S&Ws of that era, the installation was a simple procedure that required only a screwdriver and a few minutes time. For later guns that had no upper sideplate screw, as well as Colt revolvers, it was necessary to drill and tap one screw hole, which is best done by a competent gunsmith with the right equipment. Since S&W now offers several fixed-sight revolvers in the Classic series and fits them with a retro-type upper sideplate screw, the Wondersight would doubtless work on another run of nice Smiths.

I ordered one of the new units with a view to installing it on a period revolver. The gun on which I intended to install the sight is a nice specimen of the S&W .38-44 Heavy Duty. This big old revolver was made in the immediate post-WWII era and was given the official designation of Model 20 in 1957. It is a so-called “5-screw” revolver, a heavy, six-shot .38 Special wheelgun, built on the big N-frame. Somewhere along the way, some unknown owner installed a beautiful set of stag grips on this particular gun. It was a matter of a few minutes work to get the Wondersight on the gun and working.

How-To Installation
I strongly recommend that you do the installation on a workbench that has good illumination and a light background. Some of the parts of the unit are small and can be easily lost. Remove the upper sideplate screw from the gun and install the adapter plate and sight. Finish by putting the index pointer in place and securing it with the long Allen head screw that’s provided. In essence, you are clamping an L-shaped sight to the side of the gun with a screw. To correct for elevation, loosen the clamp screw just a little, then slide the sight either up or down to move the strike of the bullet closer to the point of aim. It is a cut and try system, so remember to tighten the clamp firmly before firing a few shots after a new adjustment. One of the virtues of the system is that it works with the existing front sight. If you can shoot a group, you can quickly get that group to coincide with your point of aim.

It is even easier to adjust your point of impact for windage. The sight body you have screwed to the side of the gun has a small knob on the right side. It has an internal detent that causes the sight to click as the knob is turned. One click will move the sight to cause about a 0.25 of an inch change in point of impact at 25 yards. Although the components of the system are small, the sighting notch is about the same width and depth as on S&W’s conventional adjustable sight revolvers. With an FDL Wondersight in place, you can get some more mileage out of that older revolver you inherited. My shooting buddy Jon Maxwell was delighted to hear that they were available again and quickly ordered several for various guns. With adjustable sights in place, Jon was able to return several WWI-era S&W .45s to active (and accurate) service once again.

They also work well on Colts and S&Ws that don’t have that upper sideplate screw. Granted, it is a challenge to drill the hole (an irreversible modification), but if you really need adjustable sights on an older revolver, this is the way to go. Better yet, remember that a Wondersight installation on a gun that does have the upper sideplate screw can be temporary. Just undo the one screw that holds the unit in place and replace the original sideplate screw and the gun is back to the original condition. There is no adverse affect on collector value.

Information on purchasing them may be found at hollowpointmold.com.