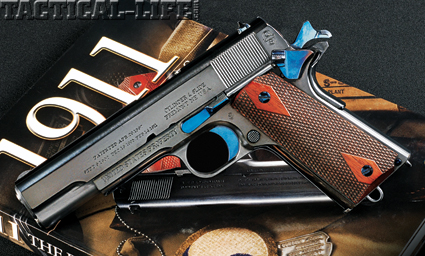 Cylinder & Slide’s Bill Laughridge recreated John Moses Browning’s Model 1911 to celebrate the weapon’s 100th year of service. No effort was spared in recreating the pistol as historically accurate as possible.

For more than thirty years, Cylinder & Slide has been considered by many to be the premier 1911 shop in the world. Founder, Bill Laughridge, has established a reputation for being one of the world’s finest 1911 builders. From minor repairs to complete custom builds, Bill and his talented staff do it all.

However, nothing compares to Bill’s latest endeavor. In early 2010, Bill and I were discussing the upcoming 100th anniversary of John Moses Browning’s 1911 pistol. The Colt 1911 was officially adopted by the United States Military on March 29, 1911, and Bill knew that a lot of companies would be producing a 100-year anniversary model. He predicted that most of these would be current production designs with special markings, stocks, or engraving.

Bill had a vision that went well beyond simply dressing up a current production pistol. He envisioned building an exact replica of the original 1911. To accomplish this, Bill knew he would have to examine multiple samples of early production guns. Bill put the word out about his concept and began receiving phone calls from collectors who owned early guns. In the end, he was able to examine a two-digit serial number pistol and three pistols with serial numbers under 500.

Bill disassembled each pistol right down to the pins, as each part was measured and photographed. He started off the project by turning to the company that makes his Cylinder & Slide OEM slides and frames. The company agreed to do a limited run of slides and frames that were manufactured to the original specifications based on measurements from examination of the early guns. Some of the unique features included the correct cocking serration pattern on the rear of the slide and sharper radius cut on the slide in front of the dustcover. The ejection port has a smaller, non-relieved opening as on the original. The frame was also made to the original specifications with the proper dimensions for the grip safety and no scallops at the rear of the triggerguard. 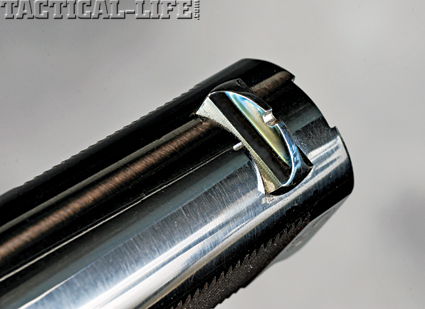 The rear sight consists of a rounded sight blade with a “U” notch that is 0.06 inches wide and 0.04 inches deep and is Niter blued.

Anyone who has held an old Colt 1911 will appreciate the craftsmanship that went into the original guns. The first commercial guns were finished in a high-polish bluing. The Colt polishers used wheels that were made in house using laminated wood covered in leather. The grit was then mixed with glue and applied to form a head on the wheel. The head was then given to a polisher who had to break it in before it could be used on a pistol. Once that was accomplished, the head would not be used by any other polisher. Polishing was, and is, a very precise skill that requires experience and practice to master. At the time, the polishers at Colt were the highest paid employees in the plant.

As on the original pistols, the frame, slide, grip safety, mainspring housing, sear, disconnector, recoil spring guide, and recoil spring plug are finished in carbona blue. Bill has partnered with master refinisher Doug Turnbull to match the bluing that was found on Colt pistols produced during 1911 and 1912. The hammer, trigger thumb safety, slide stop, pins, grip screws, magazine catch and magazine catch lock are heat blued by C&S using Niter Salts to give the parts that deep purple color. Each pistol is packaged in an original style two-piece Kraft paper box and wrapped in heavy brown waxed paper. 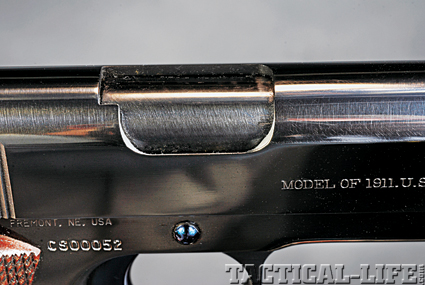 The original 1911 design features a small, high-cut ejection port reproduced on the anniversary pistols. This was modified in later variants.

The project was not without setbacks. There was considerable difficulty in producing the magazine catch and the first run of slides did not have the proper cut for the front-sight. Much of the labor involved hand-polishing the frame and slide before sending it to Turnbull for bluing. Polishing is part skill and part art that can not be rushed. Throughout the project, Bill kept his customers up to date with e-mails and website updates. He also issued what I would describe as technical bulletins, with photographs to explain the differences in each part. By the middle of 2011, Bill had most of the bugs worked out and was starting to build up the first guns. The end result is in my opinion the most faithful replica of the original 1911 that has ever been manufactured.

One of the prototypes was designated as a writer’s sample. Several months later, Bill forwarded me the pistol you see in this piece. As I opened the box, I felt as if I was stepping back in time. The polishing and bluing were perfect and the Niter parts accented the richness of the look. I felt as if I were shooting a 100-year-old piece of history!

Bill had a list of people who were waiting for the test pistol, so my evaluation time was limited. I was able to spend a morning on the range with the C&S 1911. With each round fired, I stepped a little further back in time. I ran a box or two of 230-grain FMJ and enjoyed each round. For a minute, I even thought that the ghost of John Moses Browning was standing over my shoulder and smiling. In the end, I came away with a greater appreciation of the design and history of the pistol that has been in active service for 100 years.

There will only be 115 of anniversary 1911s. The first 100 guns will be marked “Model of 1911 U.S. Army”. Ten will be marked “Model of 1911 U.S. Navy” and serial numbered numbers 501 to 510. These are accurate representations of the contract guns provided to the Army and Navy. While not historically accurate, Bill decided to do five guns marked as “Model of 1911 USMC”. While the Colt never marked any guns as USMC, Bill thinks there are at least five current or former Marines that would want a gun that they wished Colt had produced. The serial number of these guns will be 3501 to 3505 and are the actual first five serial numbers of the original guns that were shipped to the Marine Corps. When they are gone, there will be no more.

The 100th Anniversary 1911 is the completion of Bill’s vision to recreate the past so it can be enjoyed in the future. It is faithful to the first guns in every detail as John Browning would have wanted. The C&S Anniversary pistol sells for $5,000, which I feel is a real value. Given the limited production and authenticity, I am sure that all 115 units will sell out. For more information, visit cylinder-slide.com or call 402-721-0262. 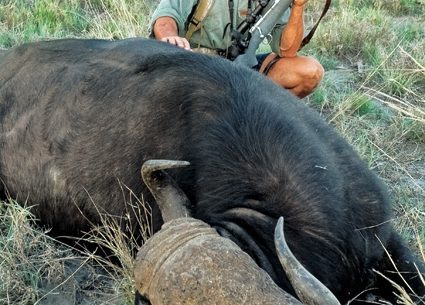