0
SHARES
314
VIEWS
Share on FacebookShare on Twitter
Based upon the venerable CZ 75, the 9mm CZ 85B is a sleek, Czech-engineered “wonder nine” offering the advantage of ambidextrous controls.

The Czechs have a long tradition of small arms production dating back to the 17th century. In 1919, the Jihoceska Zbrojovka (South Bohemian Arms Factory) was established to manufacture pocket pistols for the commercial market. They merged with the Hubertus Engineering firm in 1921 to create Ceska Zbrojovka (Bohemian Arms Factory), which became better known by its initials “CZ.”

Between 1922 and 1938, CZ designed a series of pistols that were adopted by the Czechoslovak army and police, as well as exported in large numbers. During World War II, pistol production continued to supply the German Wehrmacht. 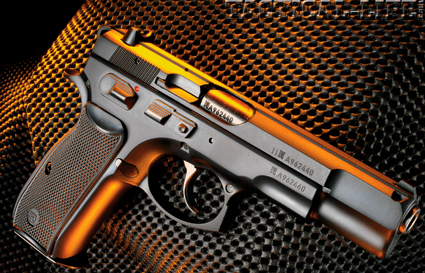 The CZ 85B features ambidextrous safety and slide release levers, as well as a squared off triggerguard. Note the generous size of the ejection port.

After World War II, a coup installed a communist government in Prague. Shortly afterwards, bowing to demands from the USSR, the Czechs agreed to adopt Soviet caliber cartridges while clinging to their tradition of using weapons of native—and often superior—design. Thus it was for the next half a century that the Czech armed forces and police used CZ-designed pistols chambered for the 7.62×25 Tokarev and 9×18 Makarov cartridges.
But while these cartridges were standard in Warsaw Pact armies, the rest of the world wanted 9mm pistols. With traditional non-socialistic Czech business acumen, CZ set about addressing this burgeoning market. 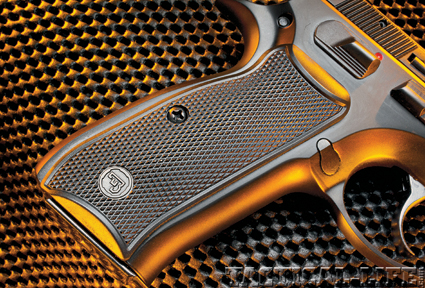