It was around 2000 or so that I became acquainted with the CZ line of pistols. I was working an off-duty job at a local gun store. One of the newest guys there, who later became one of my best friends, convinced the owner to bring in the CZ-USA line of pistols and rifles to the store. Like most people I had never heard of them. He explained to me that CZ had been building quality handguns since 1936 and their firearms were very popular outside the US, and were of excellent quality. 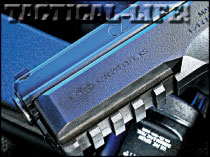 At the time I was running the SWAT team and had attended several schools at the Heckler & Koch International Training center, and Thunder Ranch as well as a number of other schools throughout the country. I was shooting at least a thousand rounds a week, often more as the store had a range and I would shoot almost seven days a week. I was a patrol sergeant working the mid-shift so I was there pretty much every day. It was part of my daily routine and I would shoot just prior to opening the store. I was anxiously awaiting the arrival of these pistols to put them through their paces. I was rather notorious for putting pistols through real testing.

When they finally arrived I was pretty amazed at the quality of the CZ line, especially considering their price. Taking full advantage of the store’s demo pistols, I had the chance to shoot most of them over time. Those pistols had the quality and workmanship of guns almost twice their price and were some of the most accurate out-of-the-box pistols I had ever used. To this day, I have very fond memories of putting thousands of rounds through a CZ 75 B Single Action (SA). It was as accurate and reliable as any pistol I had ever owned. Some of those pistols cost almost ten times as much.

I had been looking for a competition SA 9mm and the old range sessions with the CZ reminded me how nice the pistols are and the need to take a serious look at them. When asked to test the CZ 75 SP-01 Phantom, I jumped at the chance and was looking forward to putting it through its paces. After having spent some time on the all-steel SP-01 when it first came out, I was anxious to see what it would shoot like in polymer.

Gun Details
This CZ 75 SP-01 Phantom is a polymer-framed pistol that, design wise, is very similar to its all steel brother. It has a 4.72-inch barrel, a DA/SA trigger, and fixed sights with well-defined dots. It weighs 26 ounces, which is quite a bit lighter than the 40-ounce steel model. While shooting this pistol I was next to an avid CZ competitive shooter who had an all-steel CZ-75 and we were able to compare the two. The difference was quite noticeable to both of us, so the polymer saves quite a bit of weight. This pistol is chambered in 9mm and came with two 19-round magazines that provide a 20-round capacity.

The grip has aggressive checkering on the front and rear, and the sides have a pebbled finish akin to some of the less-aggressive grip tape available. The pistol fits very solidly in your hand and the checkering provides a very solid, no-slip grip similar to many polymer-gripped pistols. It worked well in my bare hands as well as with tactical gloves. After a couple of hundred rounds, I could still shoot it comfortably so it did not seem too aggressive.

As seems to be the norm nowadays, the pistol has interchangeable back straps to accommodate different hand sizes. This popular feature allows you to fit the same pistol to small or large hands. It is also equipped with a light rail and lanyard loop. As is the case with all of CZ’s pistols, the triggerguard is large enough to accommodate a gloved trigger finger and this one has checkering on the front of the triggerguard. Built into the grip is a full beavertail, which provides solid control while shooting and allows placement of the hand nice and high on the grip close to the bore line. This allows for less felt recoil than other similar pistols.

Another design feature common to the CZ pistol line is the manner in which the slide and frame mate up. Unlike most polymer pistols or pistols in general, the slide rides on rails inside the frame instead of on the outside. This generally provides for a tighter slide-to-frame fit and lock up, resulting in a greater degree of accuracy.

Gun Handling
Prior to taking the SP-01 to the range, I spent an hour or so dry firing the pistol to gain some familiarity with the DA/SA trigger pull. I had not used a DA/SA pistol in awhile, mostly carrying striker-fired pistols these days, and wanted to feel comfortable with the pistol before putting it through its paces. I attached both a Streamlight TLR-1 and older polymer tactical lights to the rail to see how they mated up and both fit nicely with no issues. I had no CZ-specific holsters around so I tried the SP-01 with an old Safariland 6004 I had lying around for a Glock 21. (Please note that although the holster may have fit the CZ SP-01 Phantom 9mm, the Safariland model 6004 holster’s design is made specifically to fit the Glock 21 and use of the holster other than its intended model is not recommended by Safariland.) It actually fit quite well and worked very nicely for dry-fire and live-fire practice.

This pistol presents very well out of the holster and fits very naturally in your hand. CZ’s engineers did a very good job with the ergonomics. The sights are easy to pick up, even in bright light and are not too bright in very low-light conditions. The sights are coated with a luminous paint making transitions to low light from bright light simple. The slide to frame fit is tight, smooth, and it fed all of my snap caps and practice rounds with ease. The DA trigger pull is smooth and feels about the same as most I have used. The SA trigger pull averaged 5 pounds over ten pulls of the trigger. There is a little take-up but it breaks cleanly.

The decocking lever is easily operated with your thumb. As a side note, if you are a 1911 shooter, be careful not to rest your thumb on this lever as you would a SA safety, especially if you tighten your thumbs on firing. I will explain it in detail in the shooting section, but it caused an issue or two for me. It is not a pistol issue but an operator issue. Overall, I found the ergonomics and operability of this pistol to be excellent. I was anxious for some range time.

Shooting Impressions
All of the shooting for this test was on an indoor range at a local shooting facility. As I arrived and checked in I noticed that the person working the counter had a CZ catalog open, and yep, it was open to the page that had the Phantom pistol. I asked her if she was a fan and she said yes. I then asked her if she wanted to shoot this pistol and she was more than willing. Rachel Jensen is a pretty experienced shooter and trainer, but I had never met her before this session, so I figured this would be a good test of the pistol.

She had never fired this pistol before so that was also a good test. I removed the pistol from the box, loaded 19 rounds of Dynamit Nobel 124-grain FMJ in the magazine and handed it to her. I had a target at 15 yards down range. She promptly fired all 19 rounds into what amounts to one ragged whole that measured around 2 inches or so. So, Rachel is a pretty good shot, and clearly there was accuracy potential with this pistol. It also gave me a clear indication I needed to get the range more often.

I got down to the business of testing for reliability and overall accuracy. Completing a number of speed loads, the pistol never suffered any failures to feed. I could push the slide release as I do on my 1911 pistol, or pull the slide to the rear and it went smoothly into battery. It did this with the FMJ bullets and four different types of hollow point ammunition. The all-steel magazines insert easily, drop free with no issues, and slam home with ease.

I was as fast with this pistol as any other I currently shoot. The only issue experienced turned out to be a shooter issue. As I am primarily a 1911 shooter, this will be good to note. Occasionally, I would get a light primer strike. Analyzing my grip, I found that pressing down hard enough on the decocker with my strong-side thumb, like I would on a 1911’s safety, would essentially decock the pistol as the slide returned from the last discharge. It is an easy fix, just rest your thumb to the side or even below the decocker. Once I repaired the shooter and continued, the Phantom never missed a beat again. As my good friend would say, it was simply an “operator head space and timing issue!”

I fired four different types of self-defense or duty ammunition through the pistol for accuracy and the results are listed in the chart. I fired all of the groups at a distance of 15 yards off hand to replicate real-world shooting. All of them grouped under three inches at that range. The best group (pictured) was shot with Federal 124-grain Hydra-Shoks, which measured 1.5 inches and were all pretty much in the center. The next closest group was the Speer 124-grain +P Gold Dot load, so there seemed to be a preference for the 124-grain bullets. The SP-01 was also very accurate with the Dynamit Nobel as evidenced by Rachel’s 19-shot group. It seemed to like the lighter bullets the least. All fired without malfunctions.

Final Notes
Bottom line, the Phantom is a really nice pistol if you are in the market for a polymer, 9mm tactical pistol. It’s accurate, comfortable to shoot, and has all the modern ergonomics that come with polymer. It shoots just like its steel brother with significant weight savings. All of my holster time was in a tactical thigh holster and I would not hesitate one second to carry this pistol on operations or on duty. It was a ton of fun to shoot and those at the range that had the chance to fire the Phantom really seemed to enjoy it.

At present you are limited to 9mm and DA/SA which is still the most prevalent in the police world. It is priced quite competitively as well with a manufacturer’s suggested retail price of $681. This is a solid, all around pistol that you could easily carry, use on operations, at competitions, or simply have in your dresser with a light on it for home self defense. If you are looking for a 9mm polymer tactical pistol you would do well to give this one a very long look.