The D-Technik Samopal Vzor 1961—Submachine gun Model 1961 (Sa Vz. 61) design dates to the late 1950s at the height of the Cold War. Although the Czech’s were part of the Soviet-dominated Warsaw Pact, they marched to the tune of their own drummer as far as small arms design was concerned, exemplified by the Sa Vz. 58 rifle and the Sa Vz. 61 “Scorpion” pistol. The original Vz. 61 was a compact submachine gun intended for non-infantry personnel to use for personal defense. While the Scorpion’s .32 ACP cartridge isn’t currently considered a particularly effective defense load by most, at the time it was in development there were many .32 ACP pistols in production and in use by military and law enforcement, particularly for the European market. The Czech Interior Ministry standardized the .32 ACP, so it was only natural that a weapon would be designed around the standard cartridge.

Although not widely known in the US, the Scorpion was adopted by a number of non-Warsaw Pact countries, including Egypt, Ireland, Israel, the Netherlands, Serbia and Yugoslavia, which acquired rights to produce the Scorpion and manufactured an identical submachine gun designated Model 84. Scorpions were designed in several other calibers, including .380 ACP (9x17mm), 9x18mm Makarov and 9mm (9x19mm), although the only version manufactured was the .32 ACP variant. Because of its compact size, the Scorpion was also a favorite of special operations forces.

Czechpoint has direct links to D-Technik in the Czech Republic and is the sole importer and distributor of D-Technik products in the United States. In addition to Vz. 58 and Vz. 61 firearms and accessories, Czechpoint carries a full line of repair parts and offers technical support for all products they import. Czechpoint is also establishing a nationwide distribution system for D-Technik products and is the single point of contact regarding all things related to D-Technik for dealers, distributors, and individual consumers as well. 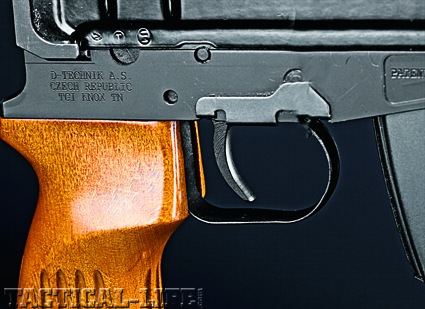 Gun Details
In terms of actual usefulness as a defense weapon, the semi-auto Scorpion probably isn’t an ideal choice. First, the .32 ACP cartridge isn’t a very effective “people stopper,” especially the FMJ loads recommended by Czechpoint. While the Scorpion is a small submachine gun, it actually turns out as a relatively large pistol, especially for one in chambered in .32 ACP. Consider that almost all .32 ACP and .380 caliber handguns are pocket size, whereas the Scorpion is a bit larger overall than a full-size M1911 and is approximately the same weight. This isn’t a criticism but an observation because the Scorpion isn’t intended as a concealed carry but as a primary self-defense weapon, given its 20-round magazine capacity. With the second standard spare magazine, the Scorpion user has 40 rounds on hand. Actually, the Czechpoint Scorpion is as close as one can come to owning an original Scorpion submachine gun. Other than removing the rate reducer, folding stock and select fire components, the Czechpoint Scorpion is identical to the weapon in use by military and law enforcement units in approximately twenty countries worldwide.

The Czechpoint lacks the folding stock of the original because it would make the pistol into a “short barreled rifle” (SBR) as defined by the BATFE, essentially putting it into the same class as a fully automatic machine- gun subject to a $200 transfer fee on top of the original price, not to mention the necessity to obtain a Class 3 license to own the gun. Nevertheless, folding stock SBRs are available for those who want an absolutely authentic “look” and are willing to pay the price of entry.

We should note that while Czechpoint uses the term “silencer,” there really is no such animal. Suppressors do not silence the firearm on which they are mounted. They suppress, but do not totally eliminate muzzle blast and flash. If supersonic ammunition is used, there will still be a loud “crack” as the bullet exits the muzzle and breaks the sound barrier. Therefore, most suppressed weapons use subsonic ammunition of some sort. In the case of the Scorpion, the .32 ACP is inherently subsonic, so suppressors have been used on the little submachine gun from the beginning.

A third Scorpion variant has a plain barrel that will not accept suppressors of any kind. In terms of suppressor use, besides the inherent subsonic nature of the .32 ACP round, the Scorpion’s barrel is fixed to the receiver so cycling issues are reduced to practically nil. If the buyer opts for a folding stock “Silencer Ready” Scorpion, they should be aware that the stock may not fold with the suppressor in place on the threaded barrel and most definitely will not fold if the three lugged barrel option is chosen due to the location of the lugs about halfway between the muzzle and receiver. The stock will clear the lugs without a suppressor installed, but will not fold with a “can” in place.

In addition to barrel options, Czechpoint offers Scorpion models in four versions. Ours was the blued model, but a nickel-finished version is also available. Finally, there are four different grips available: beech, black plastic, military style wood and walnut.

Our Scorpion came in a fitted hard case with one 10-round magazine in the pistol and two 20-round magazines in their own receptacles. Also included were a holster, magazine carrier and shoulder strap. The holster is configured so that it can be used either as a belt or shoulder holster. The Scorpion’s overall fit and finish was excellent. The lower receiver is an even phosphate finish, while the upper is a deep blue. The lower receiver is forged and machined while the upper is stamped steel.

Disassembly for maintenance and cleaning is simplicity itself. The front hinge pin is withdrawn to the left, where it is retained. The pin is simply pressed to the left and then pulled out as far as possible where a stud limits its travel. This allows the upper receiver to slide slightly forward where it can then be rotated up and pulled forward, exposing both upper and lower receiver components. Removing the bolt requires only that the bolt be retracted so that the cocking knobs align with notches at the rear on either side of the upper receiver. The cocking knobs can then be removed and the bolt and recoil springs withdrawn completely out of the upper receiver. No further disassembly is necessary. 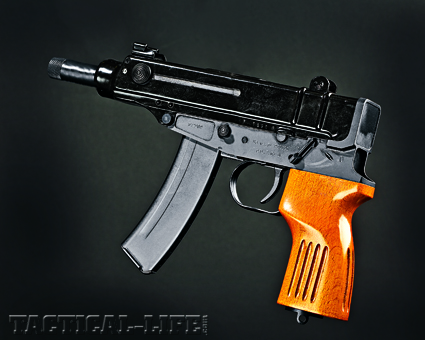 Range Time
Although the Scorpion’s grip angle is virtually 90 degrees and the bolt and barrel are well forward, the pistol was only slightly muzzle heavy and was easy to control. Recoil was very mild and muzzle rise was virtually nil. Spent brass was ejected vertically and stayed well clear of the shooter. Due to the mild recoil and minimum muzzle rise, rapid-fire strings with the Scorpion were a piece of cake. We were able to empty the magazine and stay on target as fast as we could pull the trigger. The Scorpion shot point-of-aim at 15 yards and was “minute of can” accurate. The Scorpion is truly a “fun gun” for informal shooting, and with its 20-round magazine capacity could make it possible to use for self-defense.

We tested our Scorpion with Winchester Slivertip and Wolf JHP in addition to Remington FMJ and had zero malfunctions—it ran with total reliability. The Scorpion was just as reliable and accurate with Wolf 71-grain JHP and Winchester 60-grain Silvertip as it was with Remington 71-grain FMJ. Did we mention that the Scorpion is fun to shoot?

The bottom line is that Czechpoint’s Scorpion is as close to the D-Technik original SMG as can be legally owned in the USA. If one is willing to pay the extra expense for a SBR, a semi-auto is available that is externally identical to the original SMG is available. Even without that folding stock of the original, it is a high-quality, fun to shoot pistol. Find out more at Czechpoint USA’s website czechpoint-usa.com or call 865-247-0184.