Over the years many arguments have raged on when it comes to the 1911 pistol as a concealed carry piece. Two long-standing points of contention are the length of the barrel and the composition of the frame. Many simply carry full-sized all steel guns with no issues. But for many there remains a desire for a smaller pistol with the same advantages of the design, and more importantly the use of the venerable .45 ACP cartridge.

The first in this line was the Commander-sized pistol, which has a 1911 Commander frame with a 4 to 4.25-inch barrel. For many the inch-shortened barrel works well as it does not adversely affect accuracy, it is controllable and has the benefit of being reliable. Some will disagree, but I have never had a quality Commander-length pistol not work as well as any full-sized pistol. Nor have I experienced any appreciable loss in accuracy at concealed carry distances that wasn’t attributable to the shooter. There is also the added benefit of not losing any capacity, as it maintains the standard frame. This design has withstood the test of time and only improved with better manufacturing and materials, as a Commander pistol with an alloy frame is considerably lighter. Although it’s made in many calibers, the .45 remains the most popular. For many this is about perfect for concealed carry, but for others, an even shorter barrel was required.

The next step in the evolution is the Officers model, a design that incorporates a 3.5-inch barrel and a shorter grip.

This results in what many believe to be an easier pistol to conceal, but also results in one less round in the magazine. They are lighter weight and fit in some places a full-sized pistol will not, but many of the early guns were not reliable. To be honest, in many if not most cases it was probably the operator as short barrel guns require a firm hand no matter who makes them. Where a shooter may not have an issue with a full-sized pistol, any “issues”—weak grip, poor stance, or poor presentation—will all show more easily with a shortened autopistol. On the other hand, the nature of a gunfight presents just such stances and issues. As Clint Smith so nicely put it, “The gunfight is not what you make it, it is what it is!” Essentially, your survival depends on your ability to adapt to reality, not video game fantasy.

Errors typically manifest themselves as a failure to eject or failure to feed. In some cases it was the shorter barrel design, as physics just make it more difficult when the slide moves less. It requires stiffer springs and tighter overall tolerances. The first one I ever purchased required a “tune up” to run duty ammo, and that was on a $1200 pistol in 1999! For many, an Officers model left too much to be desired, and they would stick to Commander or full-length pistols. When the Defender came out with its even shorter 3-inch barrel, many just wouldn’t go for the shorter 1911 pistol.

Aluminum Frames
In addition to barrel length, the other principal argument in the 1911 world is whether an aluminum frame will hold up to “real use.” First of all, real use on a concealed carry weapon for the vast majority of shooters is about no use at all. The idea that most shooters out there shoot regularly is simply a myth. Most gun purchasers fire their weapon a few times and never use it again. And as ammunition continues to get priced off the planet, it becomes even worse. Given this reality, a pistol that will stay accurate and reliable for, say 10,000+ rounds, far exceeds anything most people will do in a lifetime.

I took a brand new aluminum-framed Commander model and did just that. In fact, I grew tired of testing the thing after about 12,000 rounds. Working in a gun store with a range, as well as the ability to shoot “store ammunition” daily made this possible, though I doubt many people could do that today. After all that, it was still accurate, still reliable, had no signs of breakage or damage and was as good as the day I took it out. I replaced return springs twice over that time, but other than that, not a thing was altered. Over that time it was mostly FMJ, but there were several hundred rounds of various defense loads as well as some really hot stuff. I gave that pistol to a friend who shot it for years with no issues. That was in the late 1990’s, so with today’s metals and manufacturing I chalk it up to the need for people to argue. I have no problems with any of my polymer pistols or those with aluminum frames. 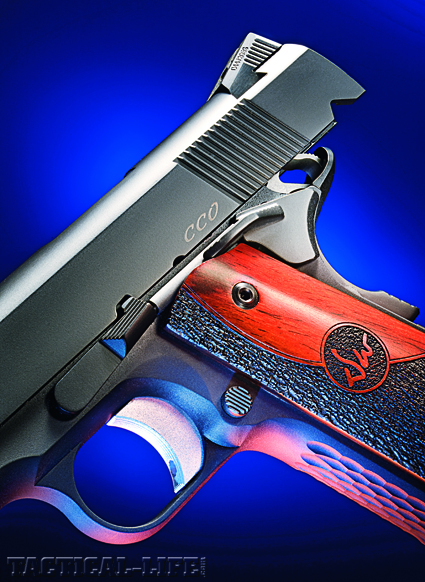 There were a few companies that tried, a Commander-length slide on an Officers’ frame. This seemed to be the “quintessential concealed carry 1911,” as it solved most of the reliability issues using the longer slide, it was not harder to conceal due to barrel length, and it offered the smaller “print” of the Officers’ frame. Depending on how you dress, that little bit on the grip can be significant. Having carried an Officers model as a secondary pistol in an ankle rig for years, I can attest to the fact that it’s rather large for ankle carry. In climates where light clothing is in order, “butt print” is a real problem for concealability. Given any one of the three sizes in my typical inside-the-pants rig, it is the butt that is the easiest to pick up. Nevertheless, this seemed to be the perfect solution. Initially they did not really catch on but it seems they are coming back, and I’m glad to see it.

Gun Details
CZ-USA and Dan Wesson has brought one of the best examples of this pistol I have seen in a long time to the market in a 1911 called Dan Wesson CCO Bobtail. The description is a bit deceiving as it pertains to the bobtail at least. There is a bit of a bob to the tail but it is just enough to make for solid carry under clothing, not the pronounced bobtail seen on the commander pistols. Given the quality of the last Dan Wesson I had tested, I was looking forward to handling and testing this pistol. 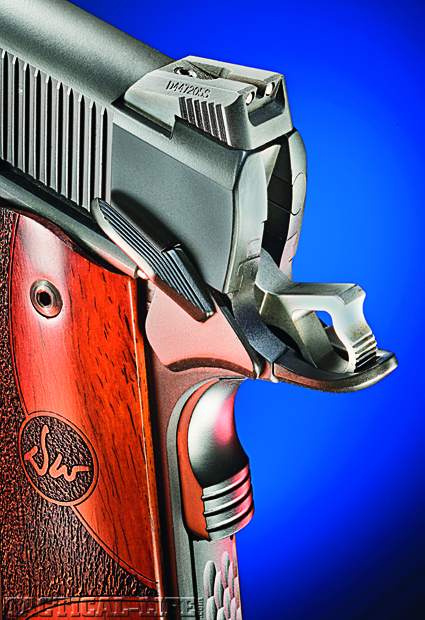 Upon first look I was not disappointed. This pistol carries the same ceramic coating as the Valor, as well as the attention to detail. It has a steel slide and aluminum frame. The coating is flat, deep, and rugged. There are no serrations on the front of the slide, just the rear. The safety is neither extended nor ambidextrous. The sights are Novak with tritium inserts, and the front sight has a white “doughnut,” making sight acquisition easy. It utilizes a fully supported barrel and a standard guide rod. I was able to take it apart without tools, but it is tight; a plastic barrel-bushing wrench is provided for those who need it. The slide to frame fit is incredibly solid. The trigger is a medium-length trigger that is crisp and clean. The frame is cut high for a good solid grip and utilizes a “Chain Link” pattern on the front of the grip in place of serrations. The magazine well is beveled, and the entire pistol is smooth as can be.

A couple of nice touches are the really nice grips and understated markings. No gaudy symbols, names, or sayings engraved in the slide, just a nice, understated CCO and that is it. The magazine release is also not extended, nor is the slide release. Being designed for concealed carry, anything sharp either hurts or snags, but there is nothing sharp on this pistol to do either. It fits comfortably in your hand and it just plain looks nice. As I passed it around the shop everyone commented on how well it felt and how nice the pistol looked. You would think you were holding a $3000 custom 1911 and not a $1500 production pistol.

Range Time
Testing began with this pistol by simply carrying it around. Once it was certain my carry ammo worked, the CCO rested in my normal concealed carry rig—an inside-the-pants Mitch Rosen rig that has seen several years of hard use. The CCO carried and concealed well. The Officers’ frame does make a difference, especially with light clothing. The weight was certainly different after normally carrying a full-sized 10mm, and it was pleasant. There was no evidence of anything poking, prodding, or otherwise making carry uncomfortable. After quite a bit of carry and dry fire practice it was time to go to the range. 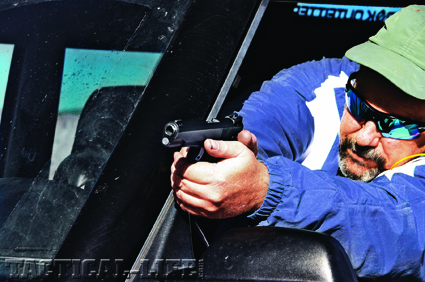 In presentations using a jacket the pistol did not snag on clothing; it presented smoothly and easily. The sights were easy to pick up and the pistol shot pretty much to point-of-aim at 15 yards. Being a concealed carry pistol, ranges for the day were under 25 yards and the bulk of time was spent at 15 yards or closer. This pistol was fired on the move, stationary and from different positions. To test it in some more unconventional positions, it was fired from my car window, the door, and from some awkward positions on some stairs. These are all circumstances one may encounter in self-defense situation.

Most of the time was spent on 6-inch round steel. The ammunition used was 230-grain FMJ, but I also ran a magazine of Speer Gold dot 230-grain, Hornady 230-grain TAP, and some 185-grain Golden Saber through it as well. It ran everything without a hitch. It did so using the included Dan Wesson magazines as well as some Wilson seven rounders and some plain old 47D eight rounders.

Accuracy was excellent for a concealed carry piece. There was no issue keeping everything on the steel, and at 12 yards with the defense ammunition it all stayed inside 3 inches. There is no doubt it is plenty accurate, but this is a concealed carry test and not intended for a match pistol. This pistol was reliable, controllable, and accurate throughout the test and I felt plenty safe carrying it around.

Final Notes
Granted, having long been a proponent of this configuration I knew I was going to be pleased. That notwithstanding, this is one of the nicest concealed carry 1911 pistols you will find out there. It was built to be carried and used with practicality, reliability, and ruggedness in mind. Although a workhorse, aesthetics are important and this pistol looks really nice. I haven’t carried a short 1911 pistol for years, but I may be changing that in the near future. It is nicely priced for a pistol of this quality, and far less than some of lesser quality. The Dan Wesson CCO just may be the quintessential concealed carry 1911, at least for me.