Many younger shooters may be unaware of the history of the Dan Wesson company. Founded in 1968 by the great-grandson of one of Smith & Wesson’s originators, Dan Wesson has been bought and sold at least six times over the past 50 years. In years past, the firm’s main claim to fame was their line of revolvers with interchangeable barrels and a seemingly endless list of available calibers. 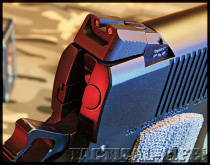 My second firearm was a Dan Wesson Model 15 in .357 Mag. My father bought it for me when I was 13 in the early 1980s. The gun had a heavy vented barrel and in addition to the 6-inch tube, I also had a 2-inch barrel. These guns were built like tanks, the medium frames (like my .357) were as massive and sturdy as S&W’s N-frame revolvers in big bore calibers such as .41 and 44 Mag.

Some would argue that the Dan Wesson revolver barrels were the most accurate available, and these guns were consistently the top guns in silhouette competitions. The late legendary Jim Cirillo prized these barrels so highly for their accuracy that he had them installed on the revolvers of other makers for hybrid guns he thought to be the ultimate.

Beginning in 1998, Dan Wesson has embarked upon producing 1911 patterned pistols, and most recently, the company has been acquired by CZ-USA. Being familiar with both companies, my interest was piqued when Dan Wesson introduced its new 1911 pistol…the Valor.