I have been carrying a 1911 pistol of one sort or another, on and off for well over 20 years now. I had the opportunity to carry pistols of all shapes, sizes, and brand names. I had custom pistols that cost close to $4000 to factory pistols costing closer to a grand. I favored some of the high-capacity 1911 pistols over the years, but as I narrow down my collection to the pistols I want to keep, a single-stack .45 ACP 1911 pistol is always in the bunch. 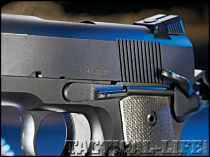 Although the 10mm cartridge is a favorite of mine, the .45 ACP in this design is hard to beat. They are simple, reliable and accurate. They point well, feel really good in your hand, the way a combat pistol should. It is not that I do not see the value in the current crop of polymer pistols, as I field them as duty pistols now. The venerable 1911 just seem to have a special place for many of us.

Over the years, I have entered into many arguments about what you need in a combat 1911 and what they should cost. As there is a huge aftermarket nowadays, just about every accessory out there is available for these pistols. Unfortunately, it has become more about the marketing and less about what is really a good mix of features. What is necessary to some is a luxury to others. It is also a whole lot easier with modern machining to get some of the “custom” features that used to cost hundreds of dollars.

It is no exaggeration that in the past I paid far more to add the features to a base pistol than I would pay for a brand-new pistol with all the same features today. To me, this has been a very good thing for the shooting sports and for the self-defense pistol market as a whole. What was often reserved for the few, who had the money to buy a custom pistol or pay to have custom features added, is now brought to the masses. What used to cost close to $2000 in custom work can now be had in a $1500 pistol right out of the box.

Over the years, I have a few expectations for a pistol I would take to work with me or to use to defend my life. This is just my list and I am certain many will disagree but that is the nature of the business. One of the first things I need is checkering on the grip. My preference is 25-LPI (lines-per-inch), although 30-LPI will do, and a match barrel and crisp trigger is required. I prefer a series 70 system, as I have always seen the series 80 system as nothing more than a solution to a non-existent problem.

I like a single-sided safety, a standard slide release and a coating that will hold up to hard use. I am not fond of MIM (metal injection molded) parts, and above all I want it to be reliable and exhibit combat accuracy. If it is a pistol for fighting, then I will trade reliability with all ammunition over same hole accuracy any day of the week. My last preference is a pistol I can take apart without tools. I like the good old-fashioned guide rods, not the single-piece guide rods.

Gun Details
It has been a long time since I used a Dan Wesson 1911 pistol. I was in the retail business when they first came out and remember how good they were for the money, but I also remember they still needed a ways to go for me. When I opened the box and took a look at this pistol I was pleasantly surprised. With one exception, it had everything I wanted in a combat 1911 pistol.

This pistol has a matte coating that has a ceramic base. The coating is over a stainless steel pistol so it should be about impervious to anything but the harshest use. It has a nice trigger with no holes in it that is crisp and clean. Over a series of ten trigger pulls, it was dead on at 4 pounds. That is about perfect for a working gun. The sights are of a no-snag design and contain tritium inserts with the rear sight adjustable for elevation.

The checkering on the grip is at 25-LPI, and the trigger is undercut to allow for a higher grip. It has a slightly extended magazine release (another preference of mine) and a really fine set of VZ slimline grips. I had several pairs of these grips over the years and I like them a ton. The only departure from my list is the slide release, which is equipped with what could be called an extended design. I know that for me that means considerable pain on the range, but that is a matter of how I shoot.

As is the case with all Dan Wesson 1911 pistols, there are no MIM parts in this gun. It also has a beveled magazine well and a really nice carry treatment that is not overdone like some of the other pistols out there. It is smooth where it needs to be without looking like your best friend had a good time with a Dremel tool. It is loaded with match grade parts, and comes with a nice big (plastic) barrel wrench and two stainless magazines. The magazines are 8-rounders with nice bumpers and metal followers as well. As I pointed and carried this pistol, it was well balanced and felt really good in my hand. I was really looking foreword to shooting this pistol.

I went through a number of drills putting this pistol through its paces. It was a soft shooter especially with the 230-grain ammunition. Magazine changes were solid and there was no issue with them dropping free. It handled all of the magazines I used with no issues at all. It was really fast on the steel targets and it was just a plain riot to shoot. I had a great time with this pistol and the only reason I stopped was because I had to teach a class that was meeting me there later.

I was grateful as I would have expended a ton more ammunition had I been given the time. I have been shooting 10mm 1911s as of late and it reminded me how much fun it is to shoot a single-stack .45 pistol. I did not suffer a single malfunction with this pistol, but I did have an occasional instance where the magazine failed to lock back, which I attributed that to the extended slide release. This occurred with several types of magazines so I knew that was not the issue.

I have never been fond of, nor have I ever advocated anything but a well-checkered standard slide release. It probably has as much to do with the way I shoot, but they have always been problematic to me. I shoot with a left hand that is very high on the grip. That means that the extended portion digs into the palm of my support hand. As that is the primary gripping hand in this kind of grip it ultimately leads to blood letting.

It also leaves me prone to depressing that release when I do not want to, hence the slide does not lock back on the last round. For the purpose of this test I changed out the one that came with the gun and inserted one of my Ed Brown standard models. The slide locked back with no issues. I then broke down the pistol and cleaned it for accuracy testing.

One of my issues with pistols nowadays is the need to make things so tight you need “tools” to tear own your 1911 pistol. Well, I was pleasantly surprised that was not the case with this pistol. It has a standard guide rod, and although it came with a barrel-bushing wrench, it was not needed. I was able to take this pistol down and clean it all by hand. It cleaned easily, and everything went back together with ease.

After cleaning the pistol, I settled in and tested the pistol for accuracy. As is my norm, I did all the accuracy testing at roughly 15 yards from an off-hand position. As I indicated in my list of preferences, I am interested in combat accuracy. Been in a few fights, never had a bench rest there? They must be with the yardage markers that some seem to feel the need to have. In any case, this pistol is plenty accurate.

The best group I was able to produce that day was a five-shot group that measured just a tad under an inch. The first three shots measured closer to half an inch. That is about as good as it gets for me in the real world and plenty accurate for a combat pistol. The most accurate ammunition for me was with the Speer Gold Dot 230-grain ammunition.

As a side note I was able to get pretty much the same accuracy and almost exactly the same point of aim with the Federal American Eagle 230-grain ball. So, as a practice/self-defense combo it would work out well. Most everything else grouped between there and 1.75 inches. It seemed to shoot most anything I put in it pretty well. It did seem to like the 230-grain stuff better than my 200-grain +P ammunition.

Final Notes
I was really pleased with this pistol. With the exception of the slide release, it has everything I have ever asked for in a working pistol. It has many features that are found at twice the price on custom pistols. This pistol was reliable over several hundred rounds and was plenty accurate to suit me, and plenty accurate for a combat pistol. It does all of this at a reasonable price. I would not hesitate a second to carry the Dan Wesson Valor on the street or on duty.