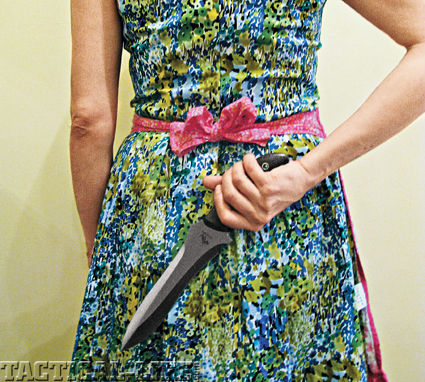 If this lady attacks you savagely with that big knife, some in society will call you a coward if you shoot her in self-defense.

Doctor Lyn Bates is a firearms instructor and has done great work with AWARE (Armed Women Against Rape and Endangerment). She is also a long-standing contributing editor to Women & Guns magazine. In the May-June 2009 edition of that publication, she wrote about a study titled “To Shoot or Not to Shoot: Response and Interpretation of Response to Armed Assailants.” It had been done by Dr. Matthew Sharps, a professor of psychology, and his colleague Adam Hess, and had appeared in the December 2008 issue of The Forensic Examiner.

One point made by Dr. Lyn Bates was that private citizens participating in the study were extremely reluctant to excuse the shooting of even an armed and violent perpetrator if that perpetrator was female. In that article, Dr. Lyn Bates wrote, “Did it matter whether the ‘perpetrator’ holding the gun was male or female? Only 11% of the people thought that police should shoot in this situation. (Does that surprise you? It amazed me.) Did gender matter? The numbers were too small for definitive results, but no male subject thought the police would be justified shooting a female perpetrator. Female subjects were about twice as likely to justify the shooting of a male perpetrator compared to a female one, but at least they did occasionally say that shooting a woman with a gun was justified.”

Dr. Bates added, “These experiments were developed to study people’s attitudes toward police who shoot in the line of duty…If you are charged with a crime and tried by a jury of such ‘peers,’ you might need an expert witness to explain why what you did was reasonable, and to dispel the myths and magical thinking that ordinary people might use to believe that you could have done something other than shoot. You are far more likely to be chosen for jury duty than to shoot someone. Thus, if you are ever on a jury that is considering a case that involves shooting (as I was a few years ago on an attempted murder case), remember that several of your fellow jurors probably have some of these misconceptions about the use of lethal force. Think about how you could educate them so that the accused receives justice.”
Cases In Point

MASTER OF HER DOMAIN

If this lady attacks you savagely with that big knife, some in society will…