For literally generations now, the American shooter has been involved in a love affair with the M1911A1 pistol. The original “slab-sides” .45 that rode on the hips of Black Jack Pershing, Sergeant Alvin York, and Audie Murphy, bears slight resemblance to many modern incarnations. The market for both factory and custom M1911 pistols is thriving. 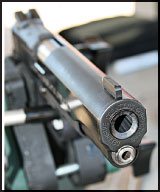 A couple of months ago I was introduced to Dave Laubert and his company, Defensive Creations Gunsmithing. Dave is a competition shooter, machinist, and now custom gunsmith. He started out working on his own guns and those of his teammates. Friends and acquaintances soon asked him to work on their pistols and rifles. Laubert has also been performing armory services for area law enforcement agencies.

After speaking with Laubert on several occasions we decided to work together on this project. The pistol featured herein is a gun that Dave built for himself. I believe it a good representation of the work he does and I was excited to try it out.

The pistol featured here started out with both a Caspian Arms alloy frame and 9mm carbon steel slide with an external extractor and a fully ramped Clark barrel. The U-notch rear and gold bead front sight were purchased from SDM Fabricating. Other M1911 custom parts included internals from Ed Brown, grip safety from Smith & Alexander, and an Evolution GunWorks full profile bushing. The guide rod is a full-length version.

Dave installed and hand fitted the slide and barrel. He milled the slide for the sights and put the snakeskin checkering on the front strap, mainspring housing and slide stop. He then blended the grip safety and barrel bushing, and tuned the trigger to a crisp 3.5 pounds. Sent with the Peaceful Warrior were three Metalform 9mm magazines that Dave purchased from the Brownells catalog.

Engraved on the left side of the slide is “Peaceful Warrior” and on the right “Licentia, Veneratio, Officium” which is Latin for Freedom, Honor, Duty. Dave engraved his company logo on the back of the slide, left and right, and the company name on the barrel bushing. Barthel’s Gunsmithing applied the deep blue finish to the final product.

Range Time
I was initially impressed by the gun’s appearance and the way it was put together. It looked and felt good. Beauty is as beauty does and the question was whether or not it would shoot. For my range time I would pack out several 9mm loads. These would include controlled expansion rounds from CorBon, Federal, and Hornady as well as FMJ rounds from CorBon and Winchester.

The first chore, as per usual, was to chronograph each load with my Shooting Chrony. I was not surprised to get some respectable velocities out of the full-sized pistol.

As this pistol was assembled with such care and attention to detail I wanted to see just how accurate it really was. I decided to bring out the HAMMR pistol rest. The HAMMR was secured to a concrete shooting bench. I don’t think I could have asked for a steadier platform.

With the rest in place I test fired five different loads, one string at a time, at 20 yards. The results were indeed impressive. What I have found when using the machine rest is that the first shot, the one I chamber by hand, tends to be off ever so slightly from the rest of the shots that are chambered by the recoil action of the pistol. This test proved to be no different. For the review I measured the best four of five shots on paper.

The deck was a bit stacked for CorBon, as I used their 147-grain FMJ match load. This ammo has historically given me excellent results and it posted an impressive 0.64 of an inch shot group. All of the other loads posted grouped below 2 inches without a problem.

Drill Tests
Moving into my second range session I knew that the gun looked and felt good, and was capable of match quality accuracy. The next trial would be to really run it hard and see what it could do.

I had an ammo can full of loose 9mm ammo from all the partial boxes and training ammunition I’ve acquired. The can held several hundred rounds and I was determined to generate a considerable amount of once-fired brass during this test. Let’s face it folks, aside from nostalgia, the M1911 has thrived because it is just plain fun to shoot and I wanted to have some fun with this project.

I strapped on my BlackHawk! Level II SERPA rig and magazine pouches, and loaded all the magazines. I really appreciate the fact that I can mount the BlackHawk! CQC magazine pouch base on my belt and switch from single column to double stack magazine holders in only seconds. For those that shoot IDPA or Three-Gun competitions, the Level II SERPA is not only a fast holster, but also secure. The SERPA Lock is a passive or automatic locking system that secures your gun without straps, snaps, or bails.

Initial drills were simple draw and fire controlled pairs. I next moved to failure to stop four-shot drills. No function problems were encountered. To really push the envelope I decided to break out my shot timer and test both the capabilities of the gun and yours truly.

From 10 yards I was able to score center mass hits from the holster with a 1-second average. Like any holster with a security device you need to practice to master it and I practiced a lot. My best controlled pair was 1.25 seconds.

What I soon discovered was that the Peaceful Warrior pointed extremely well and was easy to control for multiple shots. To test just how controllable the pistol was I ran a drill with the pistol out and on target. At the beep I fired as fast as I could keep rounds in the center of the silhouette. My best time was nine shots in 1.99 seconds. Long story short, as long as I did my part the pistol put rounds right where they were supposed to be in a timely fashion.

During one of my range sessions my lovely wife Nancy accompanied me. She has always enjoyed shooting my M1911 .45ACP pistols and was eager to try out this new one. She found the Peaceful Warrior so much to her liking that I found myself waiting not so patiently for my turn to shoot.

Final Notes
During my evaluation I succeeded in creating over 400 rounds of once-fired 9mm brass with the Defensive Creations pistol. I could have fired a lot more but I needed to sit down and type out this review.

The only issue I encountered was that the magazines did not always drop completely free when I hit the release button for a rapid reload. If I held the button with my thumb they would drop. This is naturally something that can be tweaked by a gunsmith and as this was Dave’s personal gun, he can touch it up as he sees fit. I do know some shooters prefer magazines that don’t drop free.

Overall I found the Peaceful Warrior 1911 to be a reliable, accurate, and well-made shooting iron. If it is any indication of the work Dave Laubert does, I’d have no qualms about sending him one of my personal blasters for custom workup.