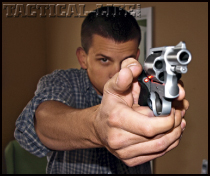 Despite the fact that the autopistol now dominates the defensive handgun market, the revolver has been enjoying a renaissance of sorts. Savvy lawmen continue to back up their service sidearm with a small snub revolver and this same hardware is often carried off-duty. In a parallel universe, armed citizens with CCW permits have discovered that it can be difficult to blend into polite society while trying to conceal that high-capacity autopistol. Then there are those folks who have always preferred the revolver for self-defense. I wouldn’t necessarily sell them short.

When I noted that a course in Defensive Revolver had been added to the Gunsite curriculum, I was intrigued. Although I shoot revolvers often, my formal training came to an abrupt halt when my agency went with an autopistol. This course would, no doubt, provide me with an opportunity to improve my revolver skills. In the end, this turned out to be one of the best training experiences I’ve had.

Gun & Gear
For my Defensive Revolver class, I used a Smith & Wesson M581 .357 Mag with Federal American Eagle .38 Special ammunition. Built on the popular L-frame, this revolver featured a 4-inch barrel and fixed sights. Originally, my M581 sported a blue finish, but had taken a toll due to holster wear. I packed it off to Bob Cogan of Accurate Plating & Weaponry, who refinished it in hard chrome and gave it a street action job. The double action trigger pull is especially nice.

For support gear, I brought a Safariland and HKS speedloader plus a Brown Shoe Vertical Carry Holster from C. Rusty Sherrick. Rusty’s website pitches this rig as a “holster for old revolver guys” and I clearly qualify. Crafted from horsehide, this holster allows one to obtain an optimum firing grip while drawing and conceals the gun very well under a loose shirt or jacket.

Ready Position
After our classroom briefing, we were off to the range to get down to the real nitty-gritty. Initial work was done from the Ready or Guard Position, which consisted of firing singles and pairs at a target a few yards away. In the field, the Ready Position would be utilized when the handgun is presented, but not fired. To acquire the Ready Position, the handgun is drawn and the arm is lowered about 45 degrees without any alteration of the elbow or wrist flexing from the shoulders. The muzzle is depressed below an adversary’s danger points (hands/feet) and the trigger finger is straight along the frame. The Ready Position is especially useful in managing threats or when moving into potential problem areas.

After the instructors got a benchmark of our groups’ shooting skill, we would then work on the presentation (drawing) of the revolver into the show. Gunsite teaches a five-count draw stroke (grip, clear, touch, smack, look) for the revolver. The ultimate goal is to be able to draw and place two center hits on a target 7 yards away in 1.5 seconds. This is a pretty high standard, but quite attainable if you work at it. The presentation can be safely practiced off the range with an empty gun. Soon enough, it will seem that the gun is up to the eye in one fluid motion.

Over the next three days, we took a number of runs on what was referred to as “school drills.” Shots were fired at a Gunsite Option Target at distances that ranged from 3 to 25 yards. Our goal was to place hits in the center of the target, all the while balancing speed with accuracy. In fairly short order, all hands were meeting with success.

We also had the opportunity to shoot from different kneeling positions. Kneeling while shooting allows one to become a smaller target, utilize cover, or support the pistol better. Positions included braced kneeling, speed kneeling, and double kneeling. All have their advantages and should be included in everyone’s handgun training regimen.

Combat Triad
The Gunsite Combat Triad consists of Mind Set, Gun Handling, and Practical Marksmanship. Mind Set remains the key to conflict resolution. Simply put, if you are not aware and willing, you will lose. This message was made abundantly clear during my recent training and really didn’t deviate at all from the message originally delivered by Colonel Cooper with, of course, “DVC.” These elements are applied consistently, providing an equal balance of power, accuracy and speed (DVC=Dilegentia, Vis, Celeritas).

The tactical reload remains a controversial and often misunderstood skill. When tac loading a pistol, we are exchanging a partly depleted magazine for a fully loaded one. With the revolver, we are voiding the cylinder of empty cases and recharging with fresh cartridges. Tactical loads are only attempted when there is a break in the action and no imminent danger is present.

One might argue that time spent practicing tactical loads with an 18-shot pistol is a waste of time. That may or may not be, depending on your point of view. The ability to tac load a revolver is absolutely vital if you choose to go afield so armed. I don’t know about you, but I would rather not dump four live rounds on the deck and reload with my final six if that’s all I had. If time is on my side and I’m behind something hard, I would attempt a tac load. Should the situation be unresolved or you’ve fired four or more, use your speedloader. My old 2x2x2 pouch got a serious workout throughout the class.

Additional live fire drills included the retention position for extremely close quarters, pivots and turns, and failure to stop. The failure to stop drill is the immediate action taken in the event a pair of body shots fails to neutralize a determined adversary. Should the two body shots come up short, a precise shot is delivered to the head. Originally, doctrine called for lowering the gun after the non-effective shots to assess the situation. This can get you dead in a hurry. The new improved drill is a much better fix.

Of course, it wouldn’t be a Gunsite class if we didn’t get to try our hand on the classic El Presidente, Dozier Drill, and man-on-man shootoffs. A couple walks through the outdoor simulator tested our skill. Steel, reactive targets along with “good guy” no-shoots were placed along a desert wash you negotiated with your revolver. Tagging these targets proved far more challenging than the square range.

Revelations
The Defensive Revolver class gave me a better appreciation of this timeless system’s capabilities. It felt good to get a first-rate workout with a revolver. Autopistols certainly have an edge when it comes to continuity of fire; but a couple of hundred tactical reloads later, I’ve become more comfortable keeping my revolver in the game. With the right tool, I wouldn’t feel “undergunned” protecting my hide with a revolver. In extreme close quarters, the revolver continues to shine and even holds an advantage over the autopistol.

The 3-day Defensive Revolver course also made me keenly aware of some of my own limitations. As most everyone knows, Gunsite is a strong proponent of sighted fire for just about anything beyond contact distance. I can tell you that the fixed front sight on my M581 has grown significantly smaller and fuzzier over the last 25 years! When I returned home, the red fiber-optic front sight on my S&W M686 made an enormous difference and was a far better deal for my middle-aged eyes.
I also found out that getting up and down wasn’t quite as easy as it used to be. In the past, I heavily favored a braced kneeling position, but I’m now much more comfortable speed kneeling. It is better to find out our limitations on the sterile environment of the range. 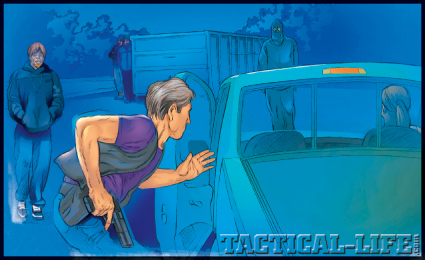 Despite the fact that the autopistol now dominates the defensive handgun market, the revolver…