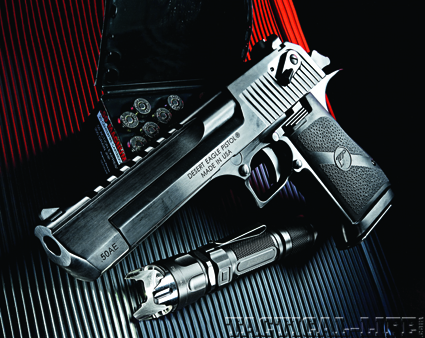 The new 2010 Desert Eagle Mark XIX .50 AE is made in the USA by Magnum Research and incorporates a number of new features that improve the gun’s handling and operation.

“Suspension of disbelief” is a literary term used in writing fiction. It is simply making the reader or viewer believe whatever happens is plausible, no matter how implausible it may be. Fiction and science fiction have been home to Desert Eagle pistols for more than 20 years as the embodiment of unrivaled firepower. Whether it is the hero’s gun or the menacing sidearm of the villain, rarely has a Desert Eagle been drawn from inside a coat and wheeled around to the camera that it has failed to impress the viewer and plant a seed in their subconscious that, when fertilized by imagination, sends them to the local gun shop in pursuit of the ultimate semi-auto. No matter how unbelievable the plot, unlikely the hero or villain, the Desert Eagle is real, as tangible as the .50 Action Express cartridges it fires. 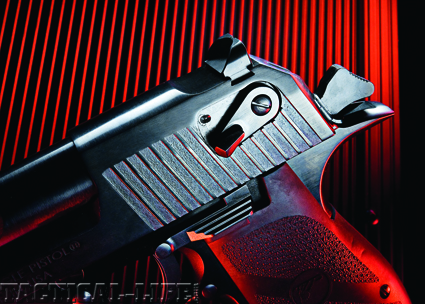 The 2010 Mark XIX features a newly designed ambi safety and the rear of the slide has been “trimmed” of excess material.

The new model XIX may look about the same as its predecessor but it differs from the earlier design in a number of both obvious and subtle ways. The new Mark XIX has an integral top mounted Picatinny rail, large, ambidextrous safeties, new two-piece, energy-absorbing rubber grips, and the rear of the slide has been “trimmed” of excess material to flatten it out and reduce weight. And, most significantly, the Desert Eagle is now made entirely in the USA.

To build the Mark XIX in the US, the entire blueprint for the gun was redrawn for CNC manufacturing, and all new tooling built to produce Desert Eagles with a tighter, more consistent fit than previous models. The gas-operated system used to cycle the action has also been improved through the use of robotic welding. Each barrel’s gas system is tested prior to assembly and guns are test fired at Magnum Research for quality assurance.
Although the new Mark XIX has been completely retooled, all US production guns and parts are interchangeable with previous Mark XIX models produced in Israel by IMI, and as with previous Mark XIX models, to switch from .44 Mag to .50 AE (Magnum Research was the first company to introduce the .50 Action Express caliber that eventually became known as the .50 AE) only requires changing barrels and magazines. (The CorBon .440 is a separate chambering).

The Desert Eagle .50 AE is one of the heaviest handguns in history, at 70.2 ounces it is just 2.8 ounces less than the fabled 1847 Colt Walker revolver, the .44 Mag of its day. Despite its size and weight, with a full magazine the Desert Eagle is surprisingly well-balanced although you can expect your hands to “rise” to the occasion when discharging the .50 AE, which has a more robust kick than the .44 Mag. It takes a moment to get back on target, assuming there still is a target left.