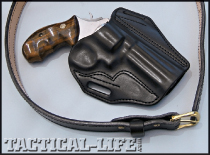 It was 1978 when Dillon Precision Products started in the reloading business. For many US shooters, the rest is history. Dillon has carved a reputation for quality and reliability over those intervening years, but not only concerning reloading equipment. It was 20 years later that Dillon hit on the idea of taking what had become their monthly issued catalog, The Blue Press, and turning it into something more than that.

For 10 years, Dillon has been sending subscribers a monthly mini-magazine for a wide range of products, some of these proprietary products, some of them competitive to Dillon’s own lines. In those intervening years, Dillon determined to create a holster line. Not being actual holster makers, the Dillon people reached out to various potential sources and discovered one, which proved ideal as an OEM (Original Equipment Manufacturer) source. Then, after really working hard to build the line, the source dried up and holsters were no longer available. For a little while, the Dillon leadership considered abandoning the holster business entirely. Yet, so much effort had been expended to build up the line that there was great reluctance just to give up.

Mitch Rosen, Dillon’s friend, suggested he contact the extremely well respected one-time stockbroker turned world-class holster maker. The Dillon people thought Mitch Rosen wouldn’t be interested. They were wrong. Samples of the holsters Dillon had been selling were sent to Rosen and Rosen responded with certain selected items from his “Express Line.” The result has been business better than ever for Dillon and what could only by termed a truly halcyon relationship between OEM vendor and customer. And, the shooting public has been really pleased with the relationship as well, judging by sales and the enthusiastic response to the line.

El Raton
I was extremely impressed by Mitch Rosen’s work when I first examined it many years back. Let’s take the samples from the Dillon Leather By Mitch Rosen line with which I have experimented one at a time. I’m a big fan of pocket holsters and a big fan of J-frame Smith & Wesson revolvers, so trying one of the Dillon pocket holsters with a S&W M640 .38 Special snubby was hardly a chore. The “El Raton” is a nicely accomplished, rough side out, two-piece construction, cowhide front pocket scabbard, which is molded to the handgun in question.

In the catalog entry for the holster, it is described as follows: “Will not come out when you draw.” And, if you do your part, that’s a quite correct statement. The front most portion of the holster lip is elevated into a point and the rear most portion of the lip, aft of the triggerguard, is somewhat extended as well. Still, the user will be best off practicing the draw with an empty gun and the ammunition set well aside.

As I was testing the holster, I experimented with pushing the holster off the gun by pulling up on the gun butt with the last three fingers and using the trigger finger and thumb to skin the holster from the gun. This action naturally moves the trigger finger forward, which needs to occur. The holster concealed a S&W 640 with CTC Lasergrips. It worked quite nicely and would have worked just as well with an exposed hammer version of the J-frame.

Model 5JR-DL
Next up was a really nicely fitting holster for a 4-inch L-frame S&W. Very nicely molded or “boned” from about a 6-ounce or slightly heavier cowhide, it is a two-slot belt holster with a very flat, body hugging silhouette and an FBI cant. The forward portion of the lip is nicely relieved in order to facilitate the draw and the triggerguard portion of the holster gives full coverage, yet allows a full grip.

No tensioning device is needed, nor is a safety strap required unless some local regulation dictated one. The Model 5JR-DL, the holster is fitted with 1-1/2-inch belt slots. The L-frame and Dillon holster combination not only proved quite comfortable, concealable and efficient, but also looked great.

I tried another version of the same holster design, but this time for the full-size 1911 pistol. I found the combination excellent. Any full-size 1911 pistol will conceal well in the right holster, the key to effective concealment resting with how the weapon is canted.

Concealment Principles
A moment’s digression into some basic concealment principles seems in order. Solid objects like the human body take up space, that space within a plane. When one stands with one’s arms at one’s side, for example, as a soldier might stand at attention, everything is within one plane when viewed from one angle or another, front or side. In order to effectively conceal any weapon carried on the body, the weapon must be masked within or beside the body plane.

Optimized Design
Because of the cant incorporated into Dillon’s design, concealment is optimized as concerns maintaining the weapon profile within the body plane in the manner described. But, still another problem can exist. Namely, if the relationship between the height of the belt slots and the holster lip is not optimized, there can result a “falling away” feeling, wherein the gun butt does not hug against the body.

Consider the belt slots as the balance point of an object set on a fulcrum, the belt being the fulcrum. One wants what is above the belt slots to slightly “over-balance” what is below, so that the butt of gun is pressed toward the body. The only men who truly cannot benefit from this arrangement are those who are carrying more than just a few pounds more than might be prudent.

Issues for women carrying at waist level are quite a bit different, since the waist is normally quite a bit smaller than the distance around the hips and higher as well and the gun butt might be pushed so much so toward the side of the body as to be uncomfortable. For most men, however, tucking the butt of the weapon toward the body because of the relationship between belt slot height and holster lip is a plus. The holster does all of that, just as it should.

Mag Pouches
Too often, we forget two important details when carrying a weapon: carriage of a spare magazine or magazines and the belt on which the weapon is carried. I tend to like single magazine pouches at belt level because they are more comfortable than doubles and can be used for pocket carry just as conveniently. This Dillon single pouch works quite well either way and because its belt loop has a snap at the base, it can be threaded onto the belt as normal, yet quickly removed or replaced. It will work with full-length magazines or shorter magazines.

The belt I tried is made from two layers of leather, so there’s a smooth lining and a smooth exterior. The lining is natural colored, the belt nicely dyed black and fitted with a single keeper and a rounded brass buckle. The belt does not say “gun” and would be perfectly suitable with your Sunday clothes. 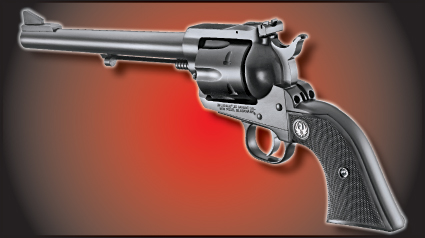 A specialized sixshooter, the Ruger’s New Model Blackhawk .30 Carbine revolver is perfect as...