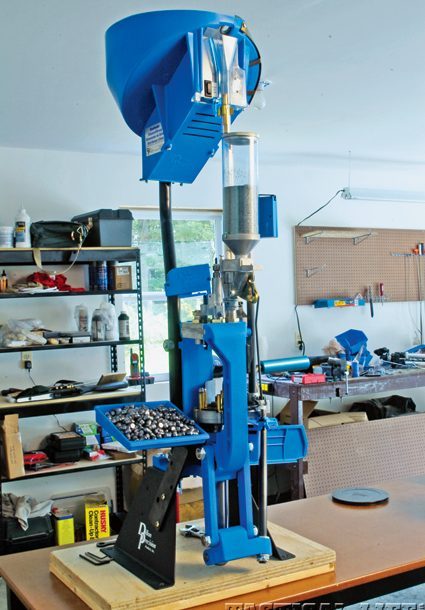 The Dillon XL 650 progressive loader is set up in author’s workshop. Note the case feed on top that speeds up the loading process.

I called a good friend of mine recently, but he didn’t have time to talk. He was headed out the door, presumably wearing a white belt, plaid pants and a goofy hat. Seems he was going to play golf, which is my idea of living in hell. I tried golf…I don’t like it. I like shooting.

I like any kind of shooting, but mostly I like action shooting as it lets me pull the trigger often. This also helps keep me sharp, which is important if I ever have to defend my life or my family. The problem is that this hobby consumes ammunition faster than Rosie O’Donnell cleans her plate at a cake-eating contest. Unlike Obama, I don’t have a lot of leisure time, or a lot of other people’s money. So I depend on handloads to keep the guns barking, and I depend on progressive loading machines to produce those large amount of handloads.

One of the big benefits of writing about guns for a living is that I get to try out most of the products on the market. There are a lot of progressive loading presses out there and I have tried them all. Most are some very good machines—I pretty much have one of each on a loading bench and in constant use. But, my absolute favorite is the Dillon XL 650. I have tried all the other Dillon loaders and have not found one that doesn’t perform. I load all my .223 rifle ammo on a Super 1050 and I have loaded thousands upon thousands of 9mm on a Square Deal machine. I have a RL550 that I load multiple cartridges with because it is so easy to make a cartridge change. Dollar-for-dollar though, I think the XL 650 is the best of the bunch. Sure, the Super 1050 is a heck of a machine, but it costs a grand more than the XL 650.

Set-Up
I know I am not alone. Mike Gibson from MGM Manufacturing makes targets for a living, and is a hardcore shooter. He tells readers on his website not to worry about the rest, get the Dillon 650. I was at a shoot two weeks ago, on a squad with a bunch of top shooters. We also had a new guy with us who had clearly been bitten by the shooting bug. (In fact, I think he said he was in a 12-step program as a recovering golfer.) He was about to make the leap into handloading and wanted to know which press to buy. With one exception, everybody said the 650. The one hold out was recommending another brand of press that he admitted took him 6 months to work out the bugs and get running. I noted that he was shooting factory ammo in the match. For the record, I was loading ammo on my XL 650 two hours after opening the box. 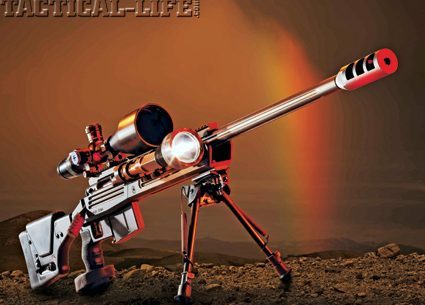 The Dillon XL 650 progressive loader is set up in author’s workshop. Note the…