BACKWOODS TERROR
The opening day of deer season started off fantastically—I had actually gotten up on time and everything. Unfortunately, Mother Nature (or Murphy’s law) didn’t comply, as it was so dry you couldn’t breathe, let alone step without cracking a branch or dried leaf.

Opening day had so many people. You couldn’t move more than a 100 yards without seeing someone. Everyone pretty much looked the same—camouflage pants, t-shirt (it was warm), boots, hunter orange vest, and hat. It made me think how funny it was that everyone was all decked out in camo…. then put on a blaze vest and hat. While I completely understand, I found it comical.

I walked around for a couple hours, checking out my old stomping grounds. But I obviously had been more agile when I was younger, because while trying to skirt around a clearing, I ended up taking a spill directly onto my rifle. When looking at the dirt and debris on the scope itself, all confidence in being able to make a clean kill was gone and I couldn’t continue to hunt in good conscience.

Yet the opportunity to be in the mountains is so rare for me, I didn’t want it to end. I decided to drive the logging roads that zigzag across the Cascades. After some time, I found a dead end with a long straight road with a huge dirt berm at the end of it. I ranged it to be about 800 yards. I hadn’t seen anyone for hours, so I figured it wouldn’t hurt anything to check the zero of my rifle prior to driving home.

I parked my truck about 100 yards from the berm. It took all the rounds I had to get on target, confirming my initial thoughts about the scope. Just after setting the rifle in its case, I started walking to pick up the target that I was shooting at. As soon as I got away from my vehicle, I could hear a truck coming down the road. The pick-up came to a sliding stop and two gentlemen (I use the term loosely) jumped out. The driver got out and was holding a riot-type shotgun at port arms. The passenger looked like a badass biker out of a movie, wearing a black leather vest, boots, a rag on his head and a very, very large knife on his side.

I smiled and said, “Hello.” Both started yelling at the same time, I heard the driver say “What the f— are you doing here?!?!” The passenger said something about it being hunting season, not shooting season, as he was advancing towards me. I tried to explain why I was there (like I needed an explanation) and that I was just getting ready to leave. The passenger reached down and unsnapped his knife.

Without hesitation, I cleared my cover garment and got a solid grip on my Heckler & Koch USP 45. I said very calmly, “I am uncomfortable and want to leave right now.” The passenger smiled and just shook his head side-to-side. I drew my .45 and brought it to low ready. In an instant, I realized that I was in line with the guy with the shotgun, so I made the decision to step further away from my vehicle to keep the passenger in his line of fire. The passenger looked down at my .45 and became infuriated! He told me what he was going to do to my body after he killed me. As I raised my .45 and took it off safe (I carry cocked and locked), I started yelling repeatedly “DON’T MAKE ME SHOOT YOU!” I knew that I had to put one between his eyes so I had more rounds to deal with the person who had the long arm. When I had the sights on target, he must have known that something bad was coming his way. He backed up and told me he would get me later.

After they took off, I remember how clear everything was. I could smell everything, the colors of the trees were just popping out, but the only thing I could hear was my heartbeat. The adrenaline rush was intense!

I drove straight to the local police department. They explained to me that they knew exactly who I dealt with and that they were “repeat clients” of theirs. Apparently, I had driven through their “farming” experiment and was lucky to be alive.
I had superimposed my morals, standards, and thoughts onto another person. I had thought that the showing of my handgun would eliminate all threats. I would have never guessed that it would have zero effect on a criminal. I know if I hadn’t had my handgun with me that day, I would be a statistic today.
—ST, OR 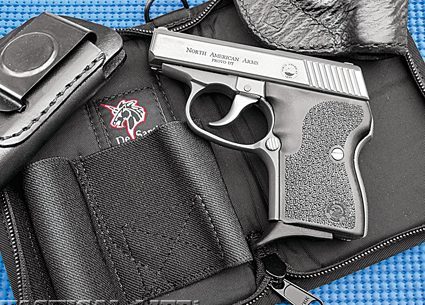