DEVILS AT THE CROSSROADS
Most people in this rural area would think it is perfectly safe to go for an evening walk down a gravel road out in the country around here. This is a small town in the upper Midwest and, until the dark gloom of meth fell over the countryside, nobody would have thought of danger in the surrounding area.

It was an early spring afternoon and I had decided to enjoy a wonderful afternoon walk down one of the gravel roads by our farm. I had only made it about a mile when I came across a couple of down-and-out looking characters in an old beat-up pickup with out-of-state plates. My senses went on alert immediately; we don’t get people that look like this in our part of the woods.

As I walked past the truck the men tried to engage me in conversation, with one doing most of the talking. They asked very peculiar questions such as, “Where do you live,” “Do you go by here at the same time every day,” etc. These were not normal questions and I suspected that they were “casing” the area, so I refused to answer them at all. I simply stated clearly that I just wanted to walk and did not want to visit, but this did not deter them.

Finally after about a minute of this they drove on ahead a ways and stopped the truck in the middle of the road. There was a dirt crossroad ahead, I turned to the south they continued straight—for a time it seemed, trouble had passed me by.

After about half a mile I turned back to return the way I’d come. I had reached the main gravel and started down it a short distance when here they came from behind me. I was trapped by the topography of the land; I was on a one-lane gravel road with swamp on both sides and had nowhere to run. When they pulled up to me this time there were a couple of distinct changes—one, they had a pit bull dog with them, and two, they now had a 12 gauge shotgun.

This was looking like serious trouble now. There had been no shotgun in sight before, let alone uncased and ready to go (which in itself is a clear violation of the law in this state, and it wasn’t hunting season of any type around here either). The questions resumed and they didn’t even pretend to be friendly about it this time. I could not get away from them, and they were not going to leave me alone. They sneered with amusement at each other; they were going to toy with me, confident that I could not defend myself. The passenger reached for the shotgun.

The time had come, as they had crossed my own personal line in the sand, so to speak. I drew my Beretta Tomcat .32 ACP and stepped to the rear of the cab, so as to give me the advantage. If they wanted to shoot me they’d have to swing that shotgun around in the cab and turn to the rear. I’d have the drop on them. Well, I didn’t have to prove that theory; at the sight of the Beretta they sped forward and distanced themselves quickly.

I don’t know what became of them but I did call our neighbors in that area to warn them. Two of the local women walk that same road all alone by themselves almost every evening so I couldn’t stay quiet about it. I also called the Sheriff’s Department and they said that there had been a string of burglaries just to the north of that location and that they suspected some “meth heads” from the same state as the truck that I saw were committing them.

I can’t prove that they were going to shoot me and bury me in the swamp, but it seemed likely. And my living to tell the tale and warn our neighbors may have saved those women from a similar fate. —DL, KS 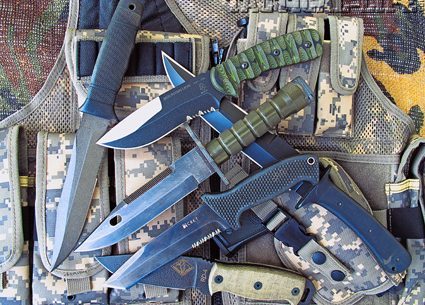