SELF-SERVICE MUGGER
Everyone should be aware of the dangers of using a self-service car wash, which allows someone to come from around a wall and be in your personal zone very quickly. I stay alert at all times when using one—there are many cases that people were robbed of money or had their car taken. Plus a self-service car wash gives a rapist a good opportunity to push a woman into her own car and drive to a spot where she can be attacked.

A few years ago, I had stopped at a car wash in a nearby city. No other cars were using the wash at that time. I placed my coins in the slot and turned the knob to my selection. As I was washing my car, I noticed that a single adult male was walking toward me from the street. As I noted him, he walked up to where I was. My self-defense mode clicked in and I was on full alert in case the situation escalated. Once he was close, he aggressively yelled out that he needed change for a dollar, at the same time approaching me even closer.

I immediately knew something was not right and shouted out for him to stop and stay back from me. He walked even closer toward me with a total disregard for my command. As he closed in, I stood my ground and I yelled again for him to stay back, stating that I would talk to him once I had completed my car wash. At the same time, I positioned the washing wand that I was holding between him and myself. I once again yelled for him to stop. He was now about 4 feet from me, when he reached to his back pants pocket. Everything seemed to go into slow motion for me at this point. I watched as he pulled a hunting knife out of his pocket, with it gleaming in the sunlight.

At this point, his intent was clear to me. Before he could even point the knife at me, I thrust the wash wand into his gut with enough force that he screamed out and fell to the ground. He got up, and I could tell that he planned on trying to use that weapon on me. I pulled my North American Arms .22 Mag from my pocket, pointed it at him and yelled at him to get out of there. I consider it disrespectful to for someone to violate my space and try to compromise my security. He put himself in a situation that could have cost him his life.

As he got up and ran away, I called the police to let them know what happened. I only used what force was necessary to defuse the situation. The guy was lucky that I knew restraint—the last thing I ever want to do is hurt someone more than is absolutely necessary.
—GH, SC 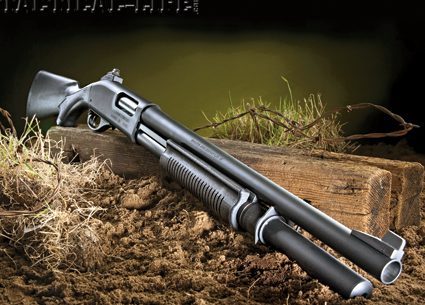 The Wilson Combat Border Patrol is a tactical scattergun born and bred for delivering...