RUN DOWN BY MADMEN

I’ve always tried to be a non-confrontational person and avoid bad situations as much as possible. I’ve carried a licensed concealed handgun since November 2001 without incident. I believe that as an armed citizen, we should hold ourselves to a higher regard of responsibility, patience, restraint, and tolerance, as most CCWs holders would agree. In April of 2006 I was traveling to work on an interstate consisting of three lanes that takes me from downtown to the northern suburbs during the daily commute. It is quite frequent to see drivers change lanes unexpectedly with or without turn signals.

I was traveling in the far right lane and turned on my left turn signal and switched to the center passing lane a few hundred yards before the onramp coming from another highway that merged with the one I was traveling on. I traveled for about 200 yards in the left lane and returned to the right lane once the traffic flow became less congested. Unbeknownst to me I apparently cut off another driver when I initially changed to the left lane, infuriating the driver and his passengers.

The next thing I knew, he was riding my bumper and honking his horn and one finger saluting me. So I once again moved back to the (left) passing lane so he could pass on the right and be on his way. He followed behind me riding my bumper honking and “saluting” me. This went on for about a half a mile or so; suddenly, he decides to accelerate and cut in front of me and slam on his brakes in an attempt to cause me to rear-end him. I then decided to pre-dial 911 on my cell phone as a precaution. I avoided hitting into him and decided to slow down to about 45 mph to put some distance between him and myself in case he intended to slam on his brakes again. In the meantime, I was looking for an off-ramp to make my escape. Unfortunately the next exit wasn’t for another two miles, I then decided to just pull off onto the shoulder and wait a few moments so that this guy can drive as fast as he wants and harass someone else.

Apparently he saw me pullover and decided to pull over as well. He pulled off a few hundred yards ahead of me then begins backing up, stopped about five cars lengths in front of me and was shouting and rifling throughout his vehicle. I then prepared myself for a confrontation.
The driver exits his vehicle with a small bat or a club in his left hand and threatened to, “F*#k me up.” I pressed send on my cell phone and told the dispatcher my location, what direction I was heading in, a brief description of my vehicle and the other vehicle, the plate number and what this guy looked like. It seemed to me that I said it all in one breath.

Shortly after the local law enforcement arrived accompanied by the state police. I was momentarily detained, interviewed, my permit and handgun were checked and a police report was filed. To this date the driver of the vehicle hasn’t been found.

I carry a handgun to protect myself, my family and in the most extreme cases the life of someone else in eminent danger. I’m thankful that nothing serious came of this incident and the fact that I didn’t have to draw or fire my handgun to defend myself showed amazing restraint on my part, as I do believe if I wasn’t armed that day I might have been seriously injured or killed. —JL, PA 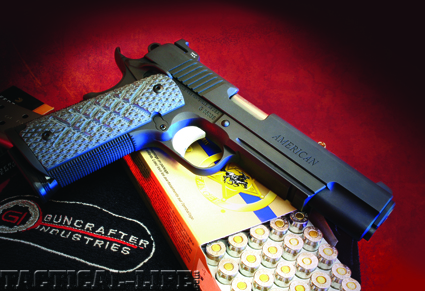