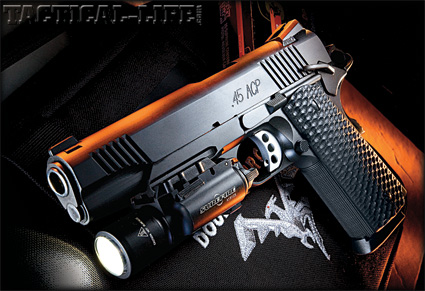 Since its birth almost 100 years ago, changes in the 1911 were slow, if not incremental, until perhaps the late 1970s or early 1980s. Until then, most changes revolved around making the old slabsides more accurate with the occasional chopping of parts to produce a smaller package.

With the increase in popularity of the action shooting sports, a desire for more reliable and practical models developed. Colt lost its edge as several other manufacturers stepped into the fray and suddenly smaller and larger 1911s, affordable to more folks, were available from the factories. “Factory custom” became the watchword.

It is hard to discern exactly which company delivered the next evolutionary product, the first 1911 wearing an integral Mil-Std-1913 (aka Picatinny) rail on its dust cover. I believe the first major company was Springfield Armory with their Operator in 2001. The addition of the integral equipment rail to the 1911 is a boon not only for SWAT cops, but also for the cop on the beat and military folks. In fact, anyone who has to work in low-light situations, including the armed citizen protecting his family, should appreciate not having to juggle a light and handgun when lead is flying.

Those who carry concealed with a rail mounted light are not commonplace. Many folks can barely or routinely conceal a small handgun, much less one with the bulk and weight of a mounted weapon light. And don’t even think about an IWB (inside-the-waistband) holster. 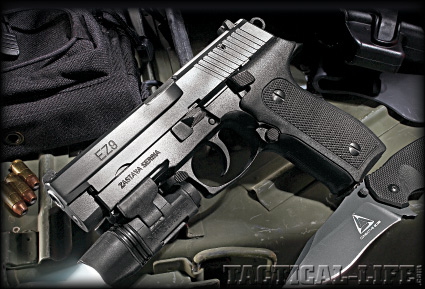 The EAA Zastava EZ 9mm is a combat-ready Yugoslavian military pistol with 16 shots...