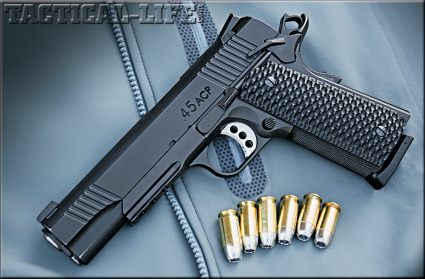 In order to be a viable or progressive firearms manufacturer in the United States today, you need to provide the American gun-buying public with one of two types of firearms. The first is a black rifle of some sort, and the second is a variant of the M1911 pistol.

Don’t believe me? Check the catalogs of Smith & Wesson, Sig Sauer, Heckler & Koch, Kimber, Remington, Taurus, Para USA and Springfield Armory. You will find either a Stoner-type rifle and/or an M1911-style pistol. Yes, there are exceptions but they are exceptions to the rule. Whether you personally like it or not, the American gun buyer has a seemingly insatiable appetite for both of these firearm platforms.

The DoubleStar Corporation (DSC) has been operating under the radar for several years now. They have been making some very well made AR-type rifles. My first introduction to DSC came in the form of a 5.56mm carbine that I tested a few years ago. The rifle performed admirably and the quality was obvious.

I was able to put my hands on the newest offering from DSC—an M1911A1 pistol. Firing a couple of magazines through the pistol just to get a feel for it, I decided right then and there that I needed to follow up after returning home.

About The Gun
The custom-built DSC M1911A1 is true to its Browning heritage and chambers a .45 ACP cartridge. This pistol uses a standard barrel bushing, recoil spring, plug and guide. The 5-inch barrel is made of stainless steel and has 1-in-16-inch right-hand rifling.

Atop the steel slide, DSC mounted a set of Novak front and rear sights using dovetail cuts. This is a nice feature as it allows the end user to install other sights if they choose. Both forward and rear cocking serrations are machined into the slide as well. The ejection port is cut open and flared to ensure that those big, fat cases get kicked out clear of the gun.

At the rear of the slide, you will find a skeletonized combat hammer. As for manual controls and safeties, the thumb safety is an extended version. The grip safety is a high beavertail design with memory grooves to ensure positive operation. The slide stop is the customary configuration, while the magazine release button is extended just a bit.

Moving down to the full-sized solid steel frame, the mainspring housing and front strap are 20-lpi (lines-per-inch) checkered. A silver colored, serrated aluminum trigger has an overtravel stop that contrasts nicely with the black pistol frame. Most notable of all features on the frame is the accessory rail milled into the dust cover. This rail will accept all manner of light/laser combinations. Rounding off the list features are the black composite grips with deep scallops for a rock solid purchase.

All full-sized, single stack M1911 magazines will fit in the gun. One Novak magazine was shipped with the pistol, so I supplemented it with 8-shot magazines from Wilson Combat and Chip McCormick.

Range Time
As I would with any semi-automatic firearm, I secured several different loads. These include controlled expansion rounds from Black Hills, CorBon, Federal, Hornady, and Winchester. Also employed were full-metal-jacketed rounds from the Winchester USA brand.

My holster rig of choice would be a SERPA holster from BlackHawk and matching single-stack magazine pouches. The current version of this holster was constructed with rail frame pistols in mind. The DSC gun fit perfectly in the coyote tan holster.

One of the many reasons that the M1911A1 remains so popular, besides the fact that it is arguably an American classic, is its excellent ergonomics or pointability. The pistol fits well in the human hand and indexes on target with ease.

The M1911A1 has a straightforward design. When mastered, it is a formidable fighting tool. The operative part of that sentence is “when mastered.” Unfortunately, too many shooters erroneously believe that a single-action (SA) pistol like the M1911A1 requires less training, thinking that it’s somehow simpler to use than a double-action gun. However, the opposite is true.

A SA trigger pull, such as that of the 1911, requires the shooter to put less pressure on the gun in order to shoot it. This fact allows for fast, accurate first and follow-up shots. However, in the hands of an uninitiated or marginally trained shooter, a light trigger press more often results in unintentional shots or shots fired before the pistol has been stabilized.

In order to maximize your shooting efficiency with the M1911A1 pistol, you must be willing to devote a good amount of time to mastering the fundamentals of the gun. Unlike a double-action (DA) revolver or a DAO autopistol, the M1911A1 must be carried with the manual safety engaged when loaded. Teaching your right thumb to positively disengage that safety during the draw stroke requires time and effort.

The grip safety is another idiosyncrasy of the M1911A1 pistol. If the shooter makes a hasty or poor grip on the gun, they may not disengage the grip safety. Many have pointed this out as a detriment to the design. Still, others would offer that this fact forces shooters to apply a good, solid grip, which leads to better placed rounds.

Many who would disqualify the M1911A1 as a combat pistol forget that it was putting bad guys to bed long before the advent of the polymer framed wonder-nine. Soldiers and Marines of these United States were taking out the enemy with 1911s when horses were still a favored mode of transportation.

As a quick side note, when the changeover from the M1911A1 to the M9 pistol took place, this was as much an economic issue as anything else. The changeover occurred at the height of the Cold War when the inventory of M1911A1 services pistols was 40-plus years old. The United States manufactured so many pistols during World War II that the Army literally had stockpiles of them. When a .45 ACP pistol broke down, military armorers simply cannibalized parts from another gun or they used the broken one for parts.

I can recall going to the range to qualify with an M1911A1. I had to use three different pistols because the first two broke down while I was shooting. The simple truth was that the WWII inventory of guns were worn out and had to be replaced. From an economical standpoint, a new Beretta pistol was cheaper than a new Colt, and a case of 9mm FMJ was cheaper than a case of .45 ACP.

Getting back to our discussion of the fighting M1911A1 pistol, it is a gun that requires some dedication to be mastered. Deliberate dry fire practice is a key to this mastery. Start slow and focus on doing everything correctly. Speed will come with proficiency and time.

During my evaluation period, I was able to get out to the range on several occasions to shoot the DSC pistol. The DSC M1911A1 consumed every round of .45 ACP that I fed it. No stoppages were encountered, but I did occasionally have an issue with the magazines dropping free after the last round. The magazine follower appeared to catch on the slide stop.

This occurred with the Novak magazine and those from McCormick. The pistol seemed to like the Wilson Combat magazines the best. That fact is a bit ironic, as I acquired these magazines from a friend because his Kimber pistol didn’t like them. That, my friends, is why we get to the range and actually test our gear before we need it.

Final Notes
As for quality and workmanship, the DSC gun gets high marks in that regard. Unlike many high-dollar custom pistols, it was not a finicky eater. The DSC pistol functioned well with all types of defensive and training ammunition. Though the slide was tight on the frame, this did not hinder its operation in the slightest. The parts were fit together with obvious care and attention to detail. I believe that 1911 fans will appreciate the newest offering from DoubleStar. 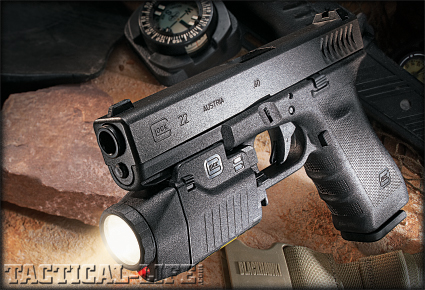