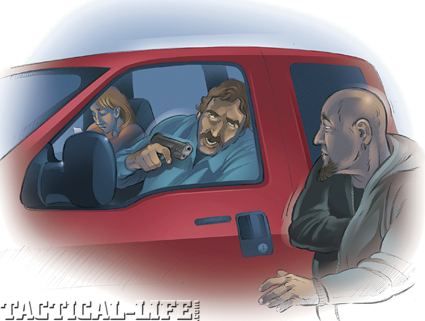 A few years back I was a college student on a spring break road trip to San Antonio, Texas with my girlfriend at the time. We were late in leaving and had to stop just south of Dallas at approximately 11 p.m. for fast food from a drive-through at a 24-hour restaurant.

I had just rolled down my window to order when a rather unkempt looking “gentleman” stepped out from behind the large menu board and began approaching my vehicle from the front, blocking my forward egress route, and the drive-through lane snaked around the building, preventing me from backing straight up. The drive-through lane also had a high curb and large shrubbery on the passenger side to direct traffic and prevent cutting in to the line, which as events unfolded I realized (as the man approaching my vehicle probably had already known) effectively boxed me in.

As a Kansas CCW holder, with reciprocity in Oklahoma and Texas, I had my Springfield Armory Operator in a Galco Royal Guard IWB holster attached to the seat adjustment bar under the driver’s side seat using the snapping belt loops (a method I have grown very fond of since this incident, as the weapon rides securely and is still very accessible with the grip forward and in front of the seat between my legs while driving and not digging a hole in my lower back where I carry it when outside the vehicle). As soon as the “gentleman” appeared I slid my right hand down and drew my pistol and kept it below the window frame of my truck and out of sight from anyone outside the vehicle.

As the man approached my driver’s side window he called out “Hey man, you have any cash I could have?” I responded that I did not have anything for him at which point he began to start forward again and reach for something in the front pocket of his Starter jacket. As he reached the truck window he said in a loud threatening voice, said loudly “Hey man, just give me your f***ing money!”

Recognizing his movement as possibly going for a weapon, I simultaneously brought my gun up and leaned toward him, presenting the muzzle of my gun just inside the cab of my truck and yelling “Get the f*** away from my truck!” Just as I swept off the safety on my 1911, the attacker screamed, “Oh sh**!” in a decidedly higher pitch than he made his demands in and beat a hasty retreat. I sat back up in my truck, re-safed my weapon and was instantly struck by the huge surge of adrenaline that I did not realize was pumping through my body until the apparent danger passed causing me to break out in a cold sweat and begin shaking uncontrollably.

Unbeknownst to me, my girlfriend had also reacted quickly and was on her phone with 911 before I even realized she was still in the vehicle (auditory exclusion had kicked in and I hadn’t heard her franticly describing to the operator that she was being robbed and her boyfriend was about to shoot the robber).

Police response was very fast, with the first officer arriving within a few minutes of the call being made. The officer had my girlfriend and I exit the vehicle, hands up and asked me where my gun was. I had set it on the dash when I heard the sirens approaching, and he retrieved it and cleared it before sitting us down on my tailgate and asking us to tell our story.

The responding officer that interviewed me after the incident was extremely courteous. I consider myself lucky, both for having the foresight and willingness to go armed on this trip, preventing myself and my girlfriend from becoming a couple more victims in the long list of crime statistics, and for the fact that I didn’t have to go through the emotional and legal ordeal of shooting the aggressor to resolve the incident. Since that night I have carried a weapon nearly every day, and I haven’t been a victim yet. —DM, KS 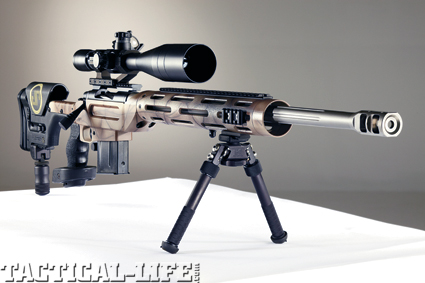