0
SHARES
25
VIEWS
Share on FacebookShare on Twitter
The EAA K2 .45 ACP, available stateside through EAA, has been used by the Turkish armed forces for a number of years. The sample shown here, chambered in .45 ACP, is shown equipped with a SureFire X400 WeaponLight.

My introduction to European American Armory (EAA) occurred in the late 1990s, when I first started working in the retail gun business. Already a confirmed 10mm adherent, the Witness in 10mm caught my eye. Not only was it comfortable to hold but recoil was minimal given the chambering, and even the stock trigger was excellent.

Another intriguing part of the design was its double-action/single-action (DA/SA) trigger mechanism. Designed to be carried cocked-and-locked, if the hammer was down you could still press the trigger to fire a round. Call it a “double-strike” capability if you want, but it was different, and practical.

A good deal of range time was spent with that pistol, and a number went out the door with incredibly happy customers. Not only were they pretty solid pistols, they were well priced and within reach for most shooters. EAA has always strived to provide solid weapons at a reasonable price and have done so for many years. 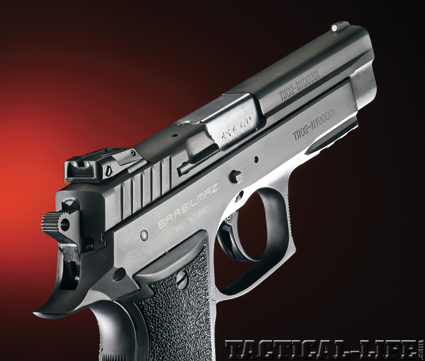 The slide has serrations on the rear and is fitted with an LPA adjustable rear sight above its Commander-style hammer.

Gun Details
Now available from EAA is the Sarsilmaz K2—an all-steel DA/SA combat pistol built for the Turkish military. This particular pistol was chambered in .45 ACP. This is not some new company, and this is not really a new pistol. Sarsilmaz has been building light arms for 131 years and is the sole supplier of pistols to the Turkish Armed Forces. They are also one of the largest arms producers in Europe. The K2 was rather broadly based upon the CZ-75 pistols, one of the most prolific pistols around, having been proven in service for years. Sarsilmaz builds these pistols at a state-of-the-art facility in Turkey using the latest in CAD/CAM and CNC technology. They are well built and easily some of the toughest pistols out there. 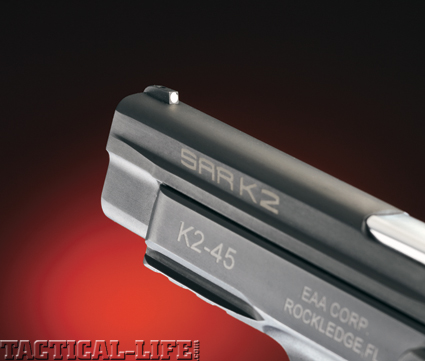 The front sight of the EAA Sarsilmaz K2 in .45 ACP features an especially large and visible white dot, aiding its sight picture.