Some items can become a victim of their own success. Take for instance the 10mm pistol cartridge. The 10mm took off like a rocket in the mid- to late-eighties. Colt could not keep up with the demand for the Delta Elite and numerous pistol makers ramped up to produce handguns in that chambering. On April 11, 1986 Special Agents from the FBI encountered some serious bad actors and decided they needed a bigger, more powerful handgun cartridge. Their answer was the 10mm.

In 1987 the sun was shining brightly in 10mm land, until the troops started carrying and shooting them. Handguns chambered in 10mm are naturally large and heavy, two items mutually exclusive to comfortable, plainclothes carry. Also, the 10mm pistol cartridge is for the experienced. Driving 180-grain bullets at 1,100 plus fps (feet per second), the felt recoil and report are definitely noticeable. Those assigned to carry the guns were not necessarily “gun people” or dedicated shooters. Within months of its adoption, the FBI and other law enforcement agencies were looking for a milder alternative for their fragile recruits and officers.

Another aspect that cannot be denied is the fact that many gun makers simply took .45 ACP pistols and re-fitted them to shoot the 10mm cartridge. The pressures of these two rounds are vastly different. Shooters began to complain about breakdowns in their guns.

So, where are we today? Essentially, we are back where we were two decades ago. Pistols chambered in 10mm are being used by adults who are truly dedicated shooters. The 10mm is a “kick-ass” flat-shooting pistol cartridge that seems perfectly suited for the field. 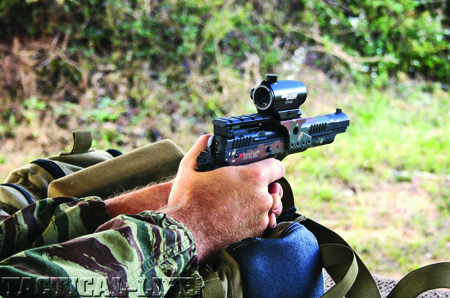 Gun Details
The pistol featured in this review began life as a blue steel Witness pistol from EAA (European American Armory). EAA has been importing Tangfolio pistols for decades. The design is tried and true.

The Florida gun company took the basic CZ pistol design and modified it to what they are calling their Hunter series. The Hunter pistols are chambered in .45 ACP and 10mm. The pistols have custom length 6-inch barrels that are fully supported. To aid with the installation of a scope mount the frame comes pre-tapped from the factory.The front sight blade is large and flat for precision and the rear sight is fully adjustable for windage and elevation. Soft rubber grip panels add comfort to the gun and checkering is added to the front and back of the frame. The high grip of the Witness design also lends itself to solid hold in the pistol. Regarding action, the Hunter pistols are single-action, not the standard double-action of other CZ clones. The trigger also includes an overtravel stop.

DuraCoat’s MirageFlage
The original pistol arrived with a deep blue/black finish and the scope mount was silver. As I was considering this as a custom field project, I thought a camouflage pattern of some sort would be in order and knew exactly where to look.

DuraCoat gun finishing products are manufactured by Lauer Custom Weaponry. While they may not stock every color under the rainbow, they are pretty damn close. The end user can choose from a basic Coyote Brown to something more exotic like “Lady AmStripe” with a black/white/hot pink combination.

For this particular project I sent the pistol up to Wisconsin and had them apply their “Wilderness MirageFlage.” Yes, this is very close to the current USMC pattern that I hold dear to my heart. The camouflage finish combines matte black, wilderness mirage brown, woodland green and woodland tan. DuraCoat is more than good looking. It provides a tough layer of protection for your firearms.

Sig Sauer’s Mini Red Dot
When it comes to putting an optical sight on a pistol, you need to keep in mind the practical capabilities of the gun itself. It makes no sense to put a high-powered scope on a pistol with a maximum effective range of 100 yards.

If you consider a 155-grain JHP round traveling at about 1200 fps, when zeroed at 25 yard, the drop is about 10 inches at 100 yards (calculated using iron sights w/half inch off-set). The round also goes subsonic somewhere between 75 and 100 yards. In steady hands, the Hunter should be deadly up to 100 yards. Keeping that in mind, I decided a 1:1 red dot type sight would be the way to go. Red dot reticles stand out and are extremely easy to pick up in a field environment.

Sig Sauer recently introduced their version of the 1:1 optic called the STS-081 Mini Red Dot Sight. The “Mini” is a compact optic that adds only 3 ounces to your gun and is 2.5 inches long. Mounting is a simple process as the base is a part of the optic. The unit will fit on any Weaver-style or Mil-Std-1913 rail.

This unit operates on a single 3V Lithium battery. Sig Sauer reports that battery life is 8,000 hours using the mid-power setting. Like most red dot sights, the power settings are 1 to 11 with 11 being the brightest. The dot is a 4-MOA reticle. 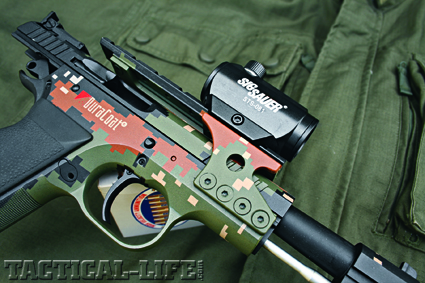 Range Time
This wasn’t the first time I had worked with the Hunter, so I knew reliability should not be an issue. From the light to heavy scale I would run 135-, 155-, 165-, and 180-grain projectiles through the pistol and chronograph each.

As you might expect, velocities from the 6-inch barrel were very good. The 135-grain Pow’RBall from CorBon smoked over the chronograph skyscreens at an average 1,428 fps.

Regarding accuracy, I decided to bench the gun and fire off of my field pack. My initial zero work was done at 25 yards. Test patterns were exceptional. The fact that the Hunter has a very nice single-action trigger press certainly did not hurt. Accurate fire of course is the responsibility of the shooter. Your groups will depend on you. The gun and ammunition are certainly more than capable.