My story begins with a night of studying at a small community college library, after working my butt off on two jobs and carrying 15 hours of classes. My free time (which came few and far between) was either attending gun shows, reading up on the latest firearms in magazines in my apartment or taking out my frustrations on man size silhouettes at the local range. Not being able to afford to pay range fees and purchase ammo, the range master whom I will refer to as “Alex” let me clean up the range area, keep tape on the dispensers and general “go fer” type chores.

Pretty soon I was greasing cables for the target returns, showing firearms to potential customers and checking out firearms for the folks who came without a gun to shoot or wanted to test out a certain gun before purchasing it. This allowed me to shoot for free and get so much ammo each month. I must have been doing a better than average job because Alex offered me a part-time job and thus I could quit one of the other jobs of delivering newspapers, getting up at 4:00 AM and draining my vehicle of gas every three days and then having to wait two weeks before I received a check. Working until closing allowed me the time to study in between business transactions and kept me busy when I had nothing to study by watching the shooters on closed circuit video.

The range stayed open until 10:30 Tuesday through Friday and Saturday until 11:00 PM. Having approximately 150 long guns and 75 to 100 pistols and revolvers, Alex always seemed to have a special going on. He gave me a pretty good discount and this helped to keep my collection growing (to a certain degree). He would pay me weekly and I would give him half of it back after buying one gun after another.

Alex would often use his range as a bartering tool to finish a deal. He would price a gun at a certain price and after a trade came up and the final was close, he would offer a three-month range card, knowing they would probably end up purchasing his ammo to shoot any way.

After about a month I had about nine lanes full of the 12 that we had open at the time. At 10:20 on a Saturday night with one customer after another, I was beginning to show signs of fatigue. It had been the first week of finals and with all the studying, work and lack of sleep all I could think about was the next 10 to 15 minutes before the range would close and the last 15 to 20 minutes would go by quickly as I finished up the final cleaning of the night.

Alex had stopped in at 10:00 PM and said that he was, “heading out of town to spend the next two nights celebrating his 23rd anniversary.” He didn’t even have to say it, but he did anyway, “keep an eye on the cameras, make sure there are no cowboy’s quick drawing on the range and last, but not least, be aware of your surroundings.” I always carried my Glock 17 in one of their belt holsters and a spare 17-round magazine on my other side. On my left ankle concealed in an ankle rig was a Seecamp .32 loaded with regular ball ammo.

About 10:45 PM I was sweeping the floor when two guys whom I had never seen before came in, one wearing one of those long cowboy dusters and the other a dingy looking old Army jacket. A faithful patron named Bill was the last to get ready to leave and as he was picking up his range card, he asked if I wanted him to stick around until I was ready to go (knowing that I had to drop the money that was in the cash register into the floor safe behind the counter). I told him I would be okay. As the guys were just milling around leaning on the counters looking at the revolvers, I slowly pulled back my shirt to allow them to see my Glock hoping this may help stop something before it could start. I kept thinking what Alex had said, “Be aware of your surroundings.”

There was only one way to get behind the counter and I was closer to it than they were. Just as I was easing towards the lift up part of the counter allowing access behind the counter, the guy in the duster asked if he could use the rest room. I told him that I was locking up in 5 minutes and the local Burger King was only 5 minutes away. The other guy asked if we sold very many Mosin Nagants and I told him we had not even had one since I had been there.

About that time I could smell the strong odor of marijuana and another odor even stronger coming from both of them. I explained that it was time to lock up and it had been a long day and I was more than ready to go home. About that time the guy with the duster on, pulled out a double-barreled shotgun (the kind with double hammers, known as rabbit ears). I dropped to my knees behind the counter and as I drew my Glock, the guy’s shotgun went off and by the sound of it, both barrels had fired at the same time, shattering two of the glass pistol cases. I do not think this was intentional, but was aware enough to know that he had no more ammo in the gun. I stood up and the other guy had a look of dismay on his face, like he didn’t understand what was going on. As the guy in the duster fumbled to get two more shells out of his pocket he dropped both of them. I pointed my Glock at the middle of his chest and said, “Do not move or I will shoot until this magazine is empty,” and by then I had bent down to get my Seecamp out of my ankle holster, I laid the Seecamp on the counter and the other guy still had not moved. I honestly did not believe he thought his buddy was serious about the entire incident. I had the cordless telephone on my side and called 911 and with my voice quivering, explained what had happened.

After the State Trooper came into the shop, he told me, “These guys had been on work detail yesterday 235 miles away and somehow walked away and were not missed at the headcount before returning to jail and had decided that they could pick up some quick cash by robbing the gun store. The shotgun had been stolen earlier that morning along with the clothes they were wearing and about $33 in cash. They had tied up the woman and left her with the kitchen sink running.

Both of the men had additional felony charges filed against them and at one of their parole hearings I was there to insure that they would not have an opportunity to do this again. Oh how these words have stayed with me over the last 20 years: “Always be aware of your surroundings.” One of the first lessons I taught my sisters, wife and daughters. With their 16th birthday each of my children were given a can of pepper spray and taught how to use it and a 5-minute lesson on how to walk to your car from the mall, library, work or other place where you should always, “be aware of your surroundings…” 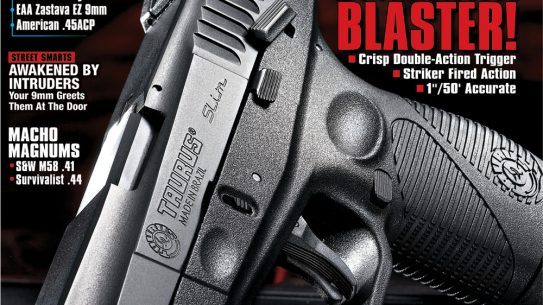