0
SHARES
23
VIEWS
Share on FacebookShare on Twitter
The Cabot Guns Jones 1911 is certainly impressive. The extreme polish and bluing are particularly eye catching—but the Jones 1911’s true beauty is found in its extraordinarily precise machining.

Cabot Guns is new to the firearms scene, and the company has entered the marketplace with a very high-end model 1911 .45 ACP, which is fitting because the original 1911 celebrated its 100th year of production in 2011. Looking at all the military 1911s that were produced for so long, most of these aged guns have seen a lot of service. They often show the wear for that hard use, but they continue to bring high dollars to those who sell or trade in them.

But the 1911s from Cabot are in no way comparable to a military 1911, as good as those latter guns are/were. Though Cabot Guns is a stand-alone company, Cabot is under the corporate umbrella of a company called Penn United Technologies. 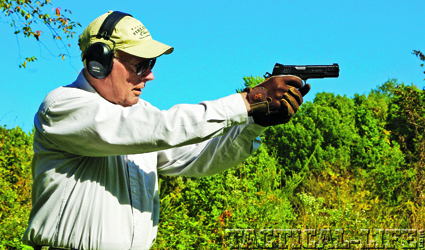 It is worth noting that Penn United as a major world player in high precision technology and manufacturing. With 600 employees, Penn United makes products for many fields; aerospace, military applications and medical products being only three of the many fields this company is involved in. The mantra at Penn United might go something like, “We build what nobody else can!”