0
SHARES
33
VIEWS
Share on FacebookShare on Twitter
The FNP-45 Competition builds on the combat-ready strengths of the platform to provide a top-notch, competition-ready pistol that is equally at home in a self-defense role.

Target pistols are designed to be fast, accurate, and durable. When you start with a gun that was specifically designed for the rigors of combat, you have a platform that has already been engineered to take exceptional abuse in the field. Since the FNP-45 was developed for the U.S.
Joint Combat Pistol Program (JCP), it offers features intended for military and law enforcement use—in other words, the worst conditions in the world. Where the conditions are ideal, on a target range, the new FNP-45 Competition model simply excels. 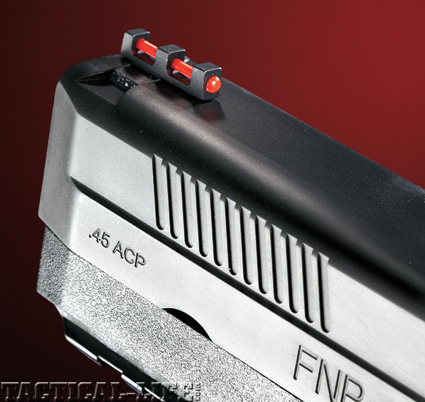 The front sight of the pistol is a shielded red fiber optic unit that provides the shooter with an enhanced sight picture for rapid target acquisition.

With a chambered round and cocked hammer, the gun can be safely decocked by thumbing the oversized safety lever all the way down until the hammer drops. Discharge is prevented by a mechanical blockage of the hammer and firing pin when the de-cocker is activated. At this point the gun is in double-action mode. Conversely, with the hammer cocked, the gun can be carried with the safety engaged in a traditional single-action (1911-style) cocked-and-locked condition. In short, it is a perfect compromise for those who consider either carrying method acceptable. The gun also has a loaded chamber indicator at the right side of the slide just behind the ejection port. If a round is chambered the indicator protrudes away from the side of the slide and a small red dot is revealed. Under low-light conditions or in darkness, the raised leading edge of the indicator can be felt with the trigger finger. This is the only significant feature of the FNP that isn’t ambidextrous. 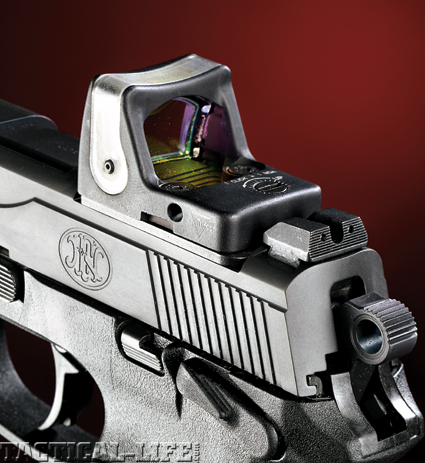 Two included interface plates allow the attachment of a variety of red dot optics, such as this Trijicon RMR. The FNP-45 Competition features a removable plate forward of the rear sight that covers a mounting point for compact electronic sights.