The FNP-45 has an extended factory threaded barrel with a thread protector. The sights are raised to provide a sight picture when using a traditional round suppressor. The RMR red dot mounts directly to the slide using a factory supplied mounting plate.

0
SHARES
155
VIEWS
Share on FacebookShare on Twitter
The name Fabrique Nationale is synonymous with battle firearms. In the late 1940s, FN introduced the legendary FN FAL, or Fusil Automatique Leger, which literally translates into “light automatic rifle.” The FAL went on to be one of the most prolific battle rifles of the 20th century and was adopted by over 100 countries. The FAL was even a contender when the U.S. was seeking a replacement for the M1 Garand. In some circles it was known as the MBR.

If the FAL is a main battle rifle, then the new FNP-45 should be known as their MBP or “main battle pistol.” The FNP-45 is FNH’s newest pistol, representing the best in both design and features while relying on a one hundred year-old cartridge—the uniquely American .45 ACP. The FNP is actually a series of pistols with various models in 9mm, .40 S&W, .357 SIG, and the .45 ACP. One of the newest variants, the FNP-45 Tactical model is shipped in a dark earth-colored nylon case, which is set up to securely hold the pistol along with a double magazine pouch and an accessory pouch.

Gun Details
The FNP-45 was developed to compete in the U.S. Joint Combat Pistol Program, and as such, the features and operating system were designed around its specific requirements. The length and height of the FNP is close to that of a Government Model but substantially thicker. The grip is approximately 1.38 inches in width and, even with the smallest backstrap, users with short fingers will find they have to stretch to reach the trigger.

Like many of the modern service pistols, the FNP-45 features a polymer frame with modular backstrap and ambidextrous operating controls. The slide rides on a replaceable steel sub-frame. Controls include an ambidextrous magazine release, safety, and slide stop. The fire control is a double-action/single-action design that features an ambidextrous safety/decocker lever located at the rear of the frame. Using a Lyman electronic trigger pull gauge, I found that the double-action pull was 11.9 pounds, while the single-action was a very clean 4 pounds. The overall travel for the trigger in DA mode is approximately 0.88 of an inch. However, in single-action mode, the trigger reset is very positive with a distance of a mere 0.25 of an inch. 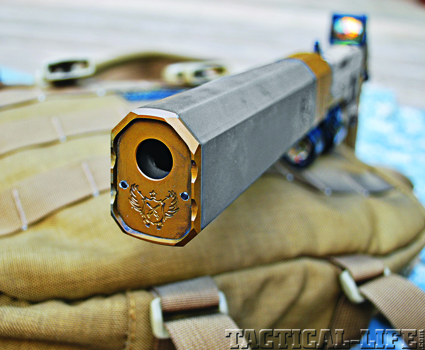 Business end of the Osprey suppressor shows the unique shape of the recessed muzzle and the .45 caliber bore.

The FNP-45 is designed with safety in mind. The slide can be manipulated with the safety engaged for safe loading and unloading of the pistol. The design of the safety also allows the FNP-45 to be carried cocked and locked. The triggerguard is large enough for even the bulkiest hands and/or use with gloves. The dust cover has the required integral accessory rail for a tactical light, such as the SureFire X300. The FNP is definitely a high-capacity pistol with a double-stack magazine that holds fifteen .45 ACP rounds.

The ambidextrous slide lock is located just in front of the safety and is small and low profile. It is obvious that FNH engineers intend reloads to be accomplished using the “slingshot” method. However, the stop is large enough for the user to manually lock the slide to the rear when clearing the pistol. The takedown lever is on the left side of the frame and disassembly is similar to a Sig Sauer. To field strip the FNP-45, the user locks the slide to the rear and then rotates the takedown lever. When the slide stop is depressed, the slide moves forward and off the frame. In order to slide the barrel out, the thread protector must be removed. 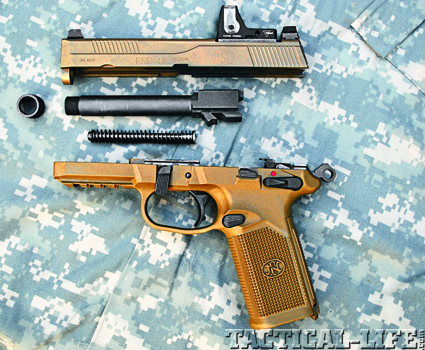 Field-stripping the FNP-45 is similar to a Sig Sauer. The slide rides on a steel insert in the frame.

I opted for the Trijicon RMR for this project. RMR stands for Ruggedized Miniature Reflex and represents the next generation in compact reflex sights. It was originally designed to provide a CQB option when mounted piggyback on Trijicon’s ACOG sight. However, it also works well as a stand-alone sight. I chose the battery-free model that utilizes a combination of a tritium insert and a fiber optic window to illuminate the crisp yellow dot. While the tritium provides illumination in low-light situations, the fiber optic takes the available light and boosts the illumination proportionally. The result is the brighter the existing light, the brighter the dot. The RMR’s housing is made from 7075-T6 military-grade aluminum and is waterproof to 20 meters. The window is 0.86 of an inch in width and 0.64 of an inch in height. The window is recessed in the aluminum housing allowing the RMR to be used as a contact point to operate the slide in exigent circumstances. After mounting the RMR, I co-indexed the dot with the iron sights for an initial zero.

Range Time
On my first trip to the range, I ran through 100 rounds before I knew it. One of the advantage, and disadvantage of suppressors is that they multiply the fun factor as well as attracting attention from everyone on the range. The result is the ammo supply is quickly exhausted. The FNP-45/Osprey combination was 100% reliable with a variety of ammunition to include some target 185-grain JHP loads. When the FNP-45 is brought to eye level, the Osprey disappears from the user’s view.

The ergonomic design of the FNP-45 made it very user-friendly. The Trijicon RMR worked well and enhanced target acquisition once we became accustomed to the proper indexing. The high-profile sights were designed to clear a traditional round suppressor.

We found that the rear sight blocks approximately the lower 1/3 of the RMR screen. This tended to hinder the acquisition of the dot until we learned to first index the iron sights. When this was done, the red dot appeared to be floating in front of the front sight. For those who use the Osprey, lower stock sights can be used. Red dot sights were once reserved for the competition world. In recent years, they have not only been accepted, but have become a requirement for battle carbines and sub guns. It only stands to reason that the next step is their use on CQB pistols. The RMR offers enhanced speed, improved target focus and improved low-light capability over traditional iron night sights. In the future, I look forward to running the RMR on other pistols.

Final Notes
The FNP-45 would not be my first choice for concealed carry. However, the options of an optical sight and suppressor place the FNP-45 in a category all by itself. FNH has turned the government’s JCPP requirements into a viable service/defense pistol that will hold its own against any competition. While the JCPP proposal has been scrapped, I commend FNH for bringing the FNP series of pistols to the market.