The excellent striker-fired FNS-9 boasts a tremendous 17+1 payload, making it a truly effective home defense solution—especially with the addition of a tactical light/laser like the Viridian C5L.

Rather than the external hammer of the FNX and FNP lines, the FNS features an internal striker system.

FN’s new FNS is a recoil-operated, semi-automatic, striker-fired pistol with 17+1 capacity in 9mm and 14+1 in .40 S&W. In fact, the “S” in the name stands for striker. FN has been making high-quality firearms for over 120 years and is responsible for some of the most successful and famous guns ever made. This was in no small part due to their partnership with one of the most well known names in firearms design, John Moses Browning. FN has also been relied upon and trusted by militaries worldwide, including our own, to produce firearms that are ultimately reliable and effective.

Gun Details
The FNS is made in FN’s US-based manufacturing facility in Columbia, South Carolina. Fans of FN may recall that the company did offer another striker-fired pistol, the Forty-Nine, which has been discontinued. Like the FN Forty-Nine the new FNS uses a double-action method of operation, but it does lack the earlier model’s double-strike capability. On the FNS the striker must be reset by the movement of the slide, either under recoil or manually. If you squeeze the trigger on a dud round there is no opportunity to squeeze it again (double-strike it), the action/slide must be cycled manually to eject the bad round and feed a fresh one and recharge the striker to be able to fire again.

The trigger measured consistently at 7 pounds with a smooth two-stage design, even break and short reset for faster follow-up shots.

Hammer fired pistols can be either single-action only, where the trigger only releases the hammer to strike the firing pin to fire the gun, double-action-only, where the hammer both cocks and releases the hammer to strike the firing pin, or both. In the case where you have both types of actions, the first shot is traditionally fired in double-action mode and the slide retracting under recoil cocks the hammer—making all the subsequent shots single-action. The disadvantage is that the shooter must learn two very different trigger squeezes.

In a striker gun there is no hammer—instead a striker mechanism is combined with the firing pin and a sear that applies tension and then releases the firing pin to fire the pistol. In some designs working the slide fully charges the striker so that the trigger only releases it, which is considered single-action. In other designs the trigger both charges (at least partially) and then releases the striker, making it a double-action. The FNS uses this second system and like all striker pistols offers the advantage of a light and consistent trigger squeeze for every shot.

This pistol will also be very familiar in look and feel to FN’s current FNP and FNX series of pistols, which use a traditional hammer-fired single/double-action method of operation. In fact the FNS is simply and FNP/FNX with a striker. Like the FNX pistol the FNS is also features blackened steel ambidextrous controls, including the frame-mounted thumb safety. This safety works in the traditional up for safe, down to fire style and shows a small red dot when it is in the fire condition. It works by physically blocking the trigger bar from moving backwards to release the striker. The safety is serrated and protrudes slightly for ease of use; however it is very far back on the frame so you have to bring your thumb back to engage it. It is also very small, minuscule even, and I found it slightly uncomfortable.

Ambidextrous slide stops are not at all a common sight on most pistols but they are much appreciated by many left handed shooters as well as those who train to fire with the support hand or with an injured hand that limits slide manipulation. The FNS, like the FNX has a fully ambidextrous slide stop/slide release that is conveniently located right above the thumb when using a proper grip. 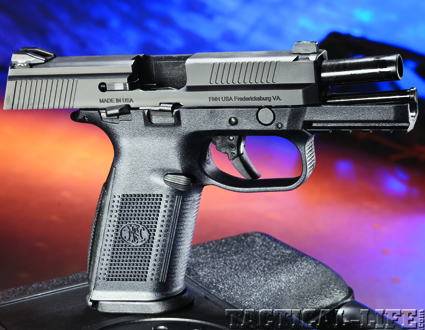 The FNS features full ambidextrous controls made up of the frame-mounted safety, magazine release, and slide-lock release.

Since under recoil there exists the possibility that the shooter will engage the slide stop and cause a malfunction, FN has added a slight bump around it to protect it, molded right into the pistol’s polymer frame. On the original FNP this protective barrier covered the sides and bottom of the slide stop, which actually made it a bit difficult to engage. Now, the bottom portion of this barrier has been almost entirely eliminated on the FNS, making it much easier to engage the slide stop. The FNS also features a fully ambidextrous magazine release, which does not require that the user switch it from one side to the other.

Additional safety features include a loaded-chamber indicator, which constitutes the front of the exposed extractor. Located on the right side of the pistol at the rear of the ejection port, the extractor has an extra bit of steel that protrudes when there is a cartridge case in the chamber, offering both visual and tactile confirmation. It also features a small amount of red paint on the top to offer further visual confirmation.

Internally the FNS has a drop safety, which can be seen when the pistol is disassembled on the bottom of the slide next to the striker firing pin. When the trigger is depressed a metal tab on the frame pushes this safety tab up which unlocks the striker firing pin and allows it to move forward to fire the gun. In this manner the user can be assured that the gun will not fire unless the trigger is depressed, for example from inertia as a result of being dropped. The trigger itself also has a rotating link that prevents it from moving backward to fire unless the trigger is fully engaged. I am not sure if it is just a liability issue but interestingly FN warns that the FNS pistol should be carried with the manual safety on and an empty chamber.

The slide is made from all stainless steel and features slide serrations at the front and rear for maximum purchase during manipulation. On top of the slide, Trijicon night sights are standard and dovetailed into the slide. They are drift adjustable for windage if needed but the gun come factory sighted. In daylight conditions they appear as somewhat standard three dot sights with the front sight appearing larger thanks to a distinct white outline around it. This allows faster front sight focus under duress and in low-light conditions they really stand out. The glow on these types of sights can be expected to last 20 years or longer. 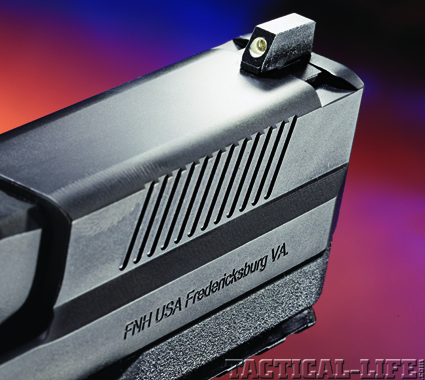 Trijicon high-visibility front and rear sights are standard, and are drift-adjustable for windage

The stainless steel 4-inch barrel features a polished chamber and feed ramp and is cold hammer forged. This is a process where a steel blank is hammered around a mandrel creating the lands and grooves as well as the chamber of the barrel and producing longer life and improved accuracy. This is mated with a full-length captive steel guide rod with a flat-coil recoil spring for longer life.

Both the slide and barrel feature a matte black melonite-coated finish for extra hardness, durability, and corrosion resistance. This is a process that leaves a nitride finish directly on the metal that is much thicker and tougher than traditional bluing. The black color is applied on top of the melonite finish. 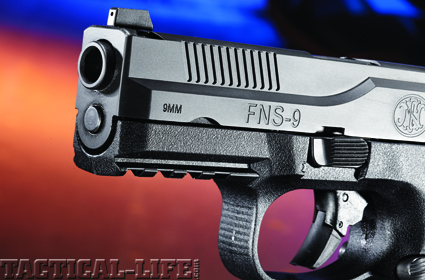 The standard dustcover Picatinny accessory rail is versatile, allowing for the mounting of various light and laser accessories

The tough polymer frame has steel slide rails inserts, which firmly retain the slide during operation. These can be factory replaced if needed, further extending the service life of the pistol. The frame also includes two interchangeable polymer backstraps—one flat and one outwardly curved—to better accommodate shooters with different sized hands. While I have large hands I still prefer the flat backstrap and finds it allows me a more complete grip on the pistol. The triggerguard is quite large for ease of use with gloves and includes checkering on the front.

Each backstrap also includes a lanyard hole, should that be needed and they are easy changeable with a pinhole in the back. The dustcover on the frame features a sizable MIL-STD-1913 accessory rail that will allow the user to mount any number of aftermarket tactical light or laser units. The pistol’s grip is aggressively checkered to ensure a secure grip even in inclement conditions; however I personally found it to be a bit too aggressive and there was a bit of bite experienced while shooting especially with hotter loads. The base of the grip features a wide bevel that makes it easier to insert magazines for faster reloading. Also, both the slide and frame narrow towards the front for ease in holstering.

On the range the FNS handled well and there were only two failures-to-feed with the first magazine of ammunition tested. After that, there were no issues and as with any pistol a good 200- to 300-round break in period is always recommended. The trigger on the sample provided measured at 7 lbs. and had a distinct two stage feel to it with a fair amount of creep but no overtravel and a fast reset. Accuracy from a sandbag rest at 25 yards produced good results for any duty or defensive pistol and firing off hand at a seven yard self defense distance the pistol kept shots easily close together.

I am a fan of FN and the FNP/FNX line of pistol, which share the ergonomics and style of the FNS. Here, FN has taken proven design, versatility and ambidextrous features and added a reliable striker mechanism. The FNS pistol, available in 9mm and .40 S&W, offers all the features shooters could want in a full-sized pistol including high capacity in two powerful cartridges and reliable performance. Find out more by calling 703-288-1292 or visiting fnhusa.com. 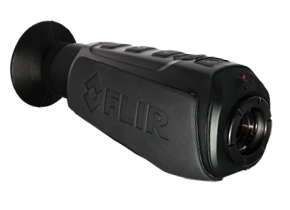 The excellent striker-fired FNS-9 boasts a tremendous 17+1 payload, making it a truly effective…