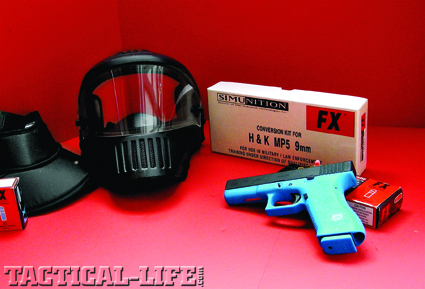 To really train for armed confrontations, it is important to make the training scenarios as realistic as possible. Having targets that shoot back and take countermeasures will obviously heighten an operator’s tactical skills…but how can this be accomplished safely? Many years ago, the British Special Air Service used to do what we now call “force-on-force” training in which one operator engaged another during building clearing, ambush, or close protections drills. The SAS used .38 Special cartridges, which had wax bullets pushed into the cases, fired by a primer. Goggles were worn to protect the eyes. Even before that, members of the SAS had stalked each with airguns and used fencing masks to protect the eyes and face. In both cases, getting hit was unpleasant and drove home the lessons learned. More recently, the SAS has used a sophisticated “dueling” system where two operators in different rooms can engage each other’s projected images using live fire.

Less-Lethal Training Systems
There are a few other units that use a similar system with two rooms while others use the video FATS (FireArms Training Systems) in some form. The FATS uses a projected scenario to which the operator responds with a special weapon and hits are recorded for playback. I have used paintball guns as well but found that the guns generally do not resemble those actually used by a unit, not to mention they are quite messy. I taught a military unit bus assaults with paintball guns and had to schedule substantial time for the cleanup.

Simunitions, a system that uses conversion units or dedicated weapons to fire blue or red dye-marking rounds, works very well with most popular duty weapons, and is available as dedicated units or conversion units. However, great care must be taken that only blue guns (those dedicated) or those with Simunitions conversion units are allowed near and on the training facility. Otherwise it would be too easy to have a weapon loaded with live rounds mixed in with training weapons, and I emphasize that great care must be taken.

Simunitions also must be used with special equipment for the participants including face protection, neck protection, and groin protection. When doing Simunitions training long-sleeve shirt and trousers are recommended rather than shorts, and many wear gloves as well. Airsoft guns may also be used for scenario training and have the advantage of being very realistic in appearance and feel. They may also be used with lighter clothing and just goggles for eye protection. 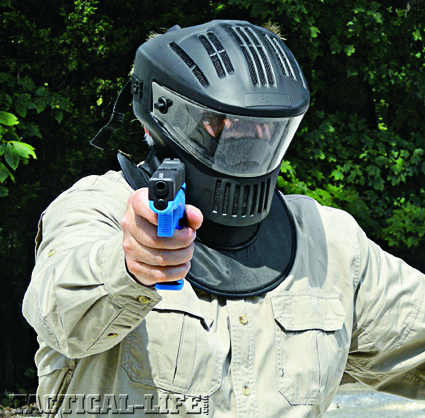 Force-On-Force Training
Force-on-force training is valuable for close protection teams in many ways. It’s especially useful when practicing foot escort drills to illustrate just how difficult it may be to stop a close range attack if immediate action is not taken. An “assassin” with a Simunitions gun can attempt to hit the principal while the team attempts to give body cover or grapple with the attacker. These drills help teach the need to move quickly for body cover as well as the need for the closest bodyguard to move towards the attacker and disrupt the shot. If a “crowd” is used, team members develop their observation skills and learn to watch for suspicious movement and place themselves to counter a possible attack. They will also learn to be aware of the possibility of a second attack from another direction if they only give body cover in one direction, while another attacker might pepper the principal with blue or red dots.

Force-on-force is invaluable in an array of AOP (attack on principal) drills as discussed above, but is also useful in counter-ambush training. Having to engage attackers who are shooting back will sharpen the protective team’s use of cover when engaging and when evacuating the principal to another vehicle. Trainees who believe they are using cover will get a rude awakening when they take shots to the facemask or chest. If they evacuate the principal too high without good cover he will end up with shots to his back or head.

Scenarios
I have also found that Simunitions are useful in scenarios where attackers are shooting at a vehicle, the type of scenario currently encountered by security teams deployed in hot spots. Even moving at slow speeds, it is difficult to engage a shooter firing at your vehicle. It is also difficult for an operator to engage a moving vehicle when its occupants are carrying out a drive-by on the principal and team. Force-on-force scenarios may be set up so that team members must engage from within a vehicle against other team members attempting to engage them from outside. Their skills at engaging will be enhanced and they will also learn their vulnerabilities in these scenarios. For example, sticking one’s head out of the vehicle while engaging makes it a prime target.

Escort scenarios in buildings offer another excellent chance for force-on-force training. Attackers can lurk in stairwells, closed rooms, elevators, etc. Members of the protective team will have to make quick decisions about engaging the “attackers,” carrying out an evacuation or leaving one or two to engage while the rest of the team evacuates the principal. A second attack may be launched along the evacuation route. Operators will have to draw their weapon and engage. If one or more are armed with SMGs or carbines, they will have to lay down cover fire.

In all of these scenarios, it will be apparent with die marks who got hit and where. Force-on-force training is a great way to increase tactical awareness and reaction time. It gives the drills more immediacy since there really is someone shooting back and often exposes flaws in a protective plan. On one training course I gave, for example, we noticed that the trainees had a tendency not to check waste barrels closely in a park where we trained. During an escort exercise, we placed a small trainer in a barrel with cardboard over the top. The team walked right by the barrel without checking it and out he popped to put three rounds into the principal at under 10 feet. Force-on-force training also does an excellent job of showing just how fast an incident can take place and how a second’s anticipation on the part of the bodyguards can save their principal. Most of all, it helps them see how they react when the adrenaline is pumping.

Good trainers will see endless possibilities for using force-on-force training, but I must emphasize again that great care must be exercised to keep live ammunition out of the training area, to the extent of making everyone empty their pockets and searching them. When using Simunitions, trainees must be required to wear proper protective gear, even though it may be hot and uncomfortable. Any training discomfort will be far better than the discomfort of taking a real bullet through use of poor tactics!

To really train for armed confrontations, it is important to make the training scenarios…