Some shooters are surprised to learn that a small, privately owned company operating from a tiny rural Wyoming town makes one of the finest revolvers in this country. When Freedom Arms first opened for business in 1979, it manufactured miniature .22 rimfire revolvers. Four years later, the company launched an all-new gun: a five-shot SA (single-action) revolver chambering the .454 Casull. It was the hottest handgun cartridge available then. 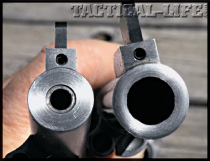 Later, the .475 Linebaugh edged the .454 Casull aside in terms of raw handgun power. The Model 757 has since been renamed the Model 83. As potent as the .475 Linebaugh is, it’s no longer top gun. Both the .500 Linebaugh and .500 S&W Mag are the new heavyweight contenders. Developing noticeably more recoil than the .475 Linebaugh, the big .500s are specifically designed to kill large, truly dangerous game. I have yet to meet a handgunner who considered either of these two .500 revolvers fun to shoot.

Today, if you want a .500 Linebaugh revolver, you’ll have to order one from a handful of custom pistolsmiths. Unlike the .475 Linebaugh, this big bore boomer isn’t available on a regular commercial basis. This isn’t a problem with .500 S&W revolvers, which have sold in surprising quantities in spite of the punishment involved in shooting them.