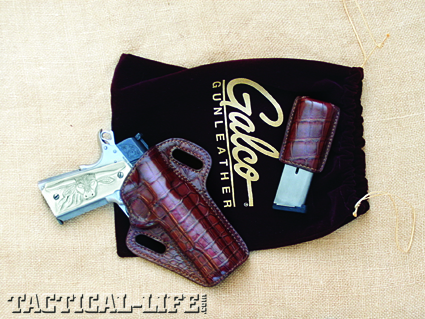 The year 2010 is something of a banner year for Galco Gunleather, with the company celebrating its 40th anniversary. First founded by Richard Gallagher as the Original Jackass Leather Company in Chicago in 1969, the company specialized in producing the finest hand crafted horsehide holsters. By 1980, the Jackass operation was so successful that it was gaining international attention. However, Galagher found that international potential customers did not understand the humor of his company’s name, so he changed it to Galco International, now known as Galco Gunleather, with Galco being short for Galagher’s Company. In 1983, Galagher relocated Galco to Phoenix Arizona.

The popular TV series Miami Vice, first broadcast in 1984, had Don Johnson as undercover detective Sonny Crockett using a Hollywood holster shop’s copy of the Original Jackass shoulder holster, but Johnson was not satisfied with it. The Miami Vice Property Master had used a Jackass shoulder rig for James Cann in the 1981 movie Thief but had lost contact with Gallagher following the move to Phoenix.
Hearing of the holster problem on Miami Vice, Galco contacted the Property Master and Gallagher flew to Miami to custom fit Johnson with the Galco (Original Jackass) spider harness shoulder holster made for the rare Bren 10 autopistol used by Johnson as Sonny Crockett. Johnson continued to use the Galco rig exclusively after changing to the Smith & Wesson 645 and later to the S&W 4506. By its second season Miami Vice was a hit being number eight in ratings and the Galco shoulder rig was marketed as the Miami Classic.

In observation of their 40th Anniversary Galco has chosen the Miami Classic II, in a limited edition of 40 rigs, produced in beautiful exotic black or black cherry Tiger Shark leather with nickel-plated solid brass hardware. It should be noted that the edition of 40 rigs quickly sold out.

Today, legal concealed carry in over 40 states has created an unprecedented demand for concealment holsters. Galco offers holsters of all kinds, for law enforcement, military, concealment and sporting use. They are made of premium grade steerhide, horsehide, and advanced rigid thermoplastics. Their popular “Holsters for Heroes” program donates Galco shoulder holsters to soldiers going overseas. Galco’s custom shop produces the finest in custom holsters, including a full line of Western rigs, such as the rigs used by Bob and Becky Munden in their professional Fast Draw exhibitions. The one of a kind Deluxe Western double holster rig with its full carved filigree, sterling silver accents and turquoise inlays is reminiscent and equal in quality of the finest Rose Bowl Parade rigs from the Hollywood shop of the legendary Ed Bohlin. 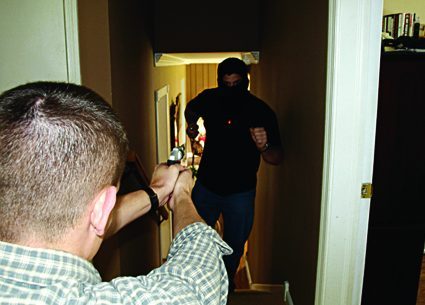 The year 2010 is something of a banner year for Galco Gunleather, with the…