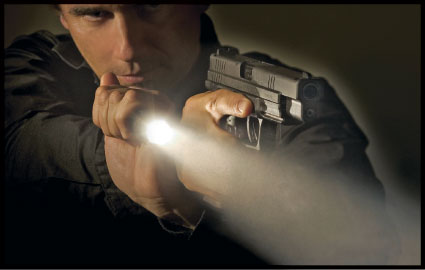 The odds are that if you are ever forced to shoot to stay alive in a defensive confrontation it will be in a low light situation. Criminals like to operate under the radar screen, and darkness and poor light aid them in their nefarious activities. The poor visibility will help them to surprise their intended victims, and also makes it harder for victims or bystanders to identify them. Anyone who pays attention to what happens on the street knows this, but for convenience sake, almost all training and practice for personal defense is conducted in broad daylight. 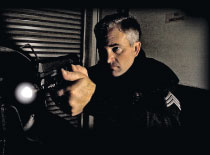 In our Paladin Program we make a point of getting out several times a year for some night shooting with flashlights and without, and with various types of indirect light. This is always a good idea if you can arrange it, but this can be difficult for many people who don’t have access to periodic formal training, or a public range that allows night shooting under low light conditions. At the very least, try to get out to your local range in the evening, where the lighting will be somewhat similar to that found on the typical city street.

First of all, keep in mind that you cannot take the chance of shooting without first identifying your target. Generally this is not a problem, because in most of the situations where you’ll find yourself there will be light of some sort, even if it is very poor. For those situations where it is so dark you can’t identify the person moving, a good flashlight properly used can be a lifesaver. But in most cases there will be enough light to locate and identify any potentially hostile targets, even though it might be hard to quickly pick up your sights.

Conquering Low Light
The important thing to remember is that for the most part you should use the same shooting technique as in broad daylight. If you think about it, all the conditions are the same, except for the poor light. One problem most folks don’t understand: It’s harder to see a weapon in the hands of a suspicious person when the light is bad. When the perp initiates the action he will be up close, and it will happen quickly.

All the rules of personal defense apply, but with the added handicap of poor visibility. It is vital that you be alert, and be especially aware of what is going on off to each side and to the rear. If you need to shoot and move, use the same methods and techniques that you would normally employ. Since the range will be short—from contact distance out to 20 feet or so—good hits can be achieved even if the sights are difficult to see, so long as your basic technique is used.

When a new shooter is forced to work under poor light conditions the tendency is to slow down and shoot very carefully. This can put you at a disadvantage because you don’t know how much time you have. Get that pistol up to eye level if there is sufficient room, and as soon as the pistol covers the center of the target, fire the shot, and in most cases two would be better.

Another common tendency I’ve observed is that when an individual first uses his new tritium sights at night, he almost invariably slows down to get a nice alignment of the three little green dots. Again, this is a mistake. You might have a nice cluster of hits on the center of the target, but in a real life confrontation these shots might arrive too late. As soon as that front dot is on target, fire the shot.

Make no mistake. I’m not advocating just throwing shots at the target in the hope of getting a couple lucky hits. Experience has shown that if you use the same basic methods and techniques that you have practiced consistently, at typical defensive distances, good hits will be there, and can be delivered in about the same time frame as when shooting under normal daylight conditions. If you can see the sights, fine. Even if you can’t pick up the sights, the basic muscular memory patterns of your consistent practice will still produce good hits most of the time.

As I grow older my eyes just don’t adjust and pick up the sights as quickly as they used to, especially when the light is poor, but most of the time I can keep up with the younger guys by following the methods described above. The important point is that you should try to work in some night shooting from time to time, just so you are aware of the problems involved, and learn how to adjust, get comfortable and cope with the problem.

Lights & Lasers
Here are some thoughts on weapon-mounted lights and lasers, as well as handheld flashlights. I think most folks would find a light mounted on their handgun to be a bit cumbersome and bulky for everyday concealed carry. However, they do make good sense for the home defense weapon, such as a pistol kept in the night stand or lock box. For police use they can be quite practical, especially for an emergency response team that might be required to conduct building searches, etc. Lasers mounted on the pistol can also be quite practical, so long as they don’t add too much bulk to the weapon, and can be activated quickly and without conscious effort on the part of the user. The same goes for a light mounted on the handgun. Keep a good compact flashlight with your handgun; it is a good idea in the nightstand, on your belt, or on the console of your car, for those situations where a little extra illumination might be very useful.

When traveling, I generally place a small high-intensity flashlight such as the SureFire 6P on the nightstand in my motel room, right next to my pistol. This will come in handy in any emergency, whether it is self-defense in a room invasion, or finding your way out of the smoke-filled third floor of an unfamiliar hotel or motel.

Here is one important point that must be stressed. If you plan to use any of these options for low light situations, you must practice with them. Two- o’clock in the morning during a heart-stopping confrontation is not the time to figure out how to use them quickly and efficiently. When faced with awkwardly trying to cope with your equipment or technique you’re not familiar with, most people will either slow down enough to try to get it right, or blow it completely by going too fast. You must practice at least enough to be familiar with this equipment or it will do you no good. In point of fact, if you don’t practice with it, you might be better off without it. Because your response will be slow and awkward, and the delivery of good quick hits on your attacker will suffer.

In closing, you should be aware of the problems inherent with defending yourself under low light conditions. For the most part use the same techniques as you would under normal daylight conditions. Simply get that front sight onto the center of the target, and at short range, don’t waste time on refining the sight picture. With a little practice the hits will be there. If you plan to use a light or laser mounted on your weapon, get out there and practice with it, so that you will be familiar and comfortable in their use. 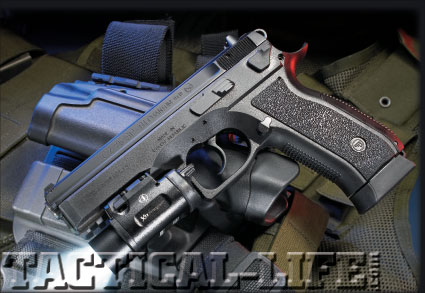