When the Glock 17 9mm pistol first appeared back in the mid-1980s, I was highly skeptical of its capabilities. To be sure, the advertising claims of its toughness, reliability, user-friendliness and general superiority over other designs were both prolific and vociferous. But let’s face it—all the gun manufacturers make such claims, right?

Aware of its burgeoning popularity, I felt that the professional thing to do was to conduct my own tests to determine not only if Glock’s advertising claims were true, but to also find out the true capabilities of the design. I thus purchased one new from my local dealer and proceeded to wring it out, deciding to try and “shoot it to death,” and keeping copious notes in the process.
One of the first things I decided to do was shoot the pistol without cleaning until it stopped functioning, and simultaneously present it from a holster (I have a daily hour-long dry-practice routine) as much as possible during the process.

This phase took longer than I expected, since the gun continued to function without interruption until a bit over 10,000 rounds had been expended. In fact, it was still functioning, but with a sluggish “ka-chunk” as the slide cycled back and forth. Subsequent examination showed that the fouling had finally reached a point where it interfered with reliable functioning.

During this initial phase, I also wore out several sets of magazines, noting that the follower springs tended to get soft after a month or so if the magazines were left fully loaded with 17 rounds. As a result, after replacing the springs, I decided to experiment a bit, loading them with only 15 rounds instead of the usual 17. 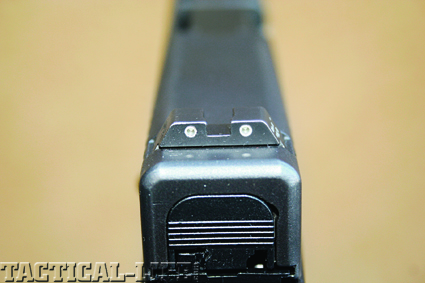 Trijicon tritium low-light sights installed on the test gun in 1988 finally faded (in 2009) to the point where replacement was required. However, inasmuch as the manufacturer guarantees them for 10 years, the fact that they lasted more than twice that long speaks for itself.

Within a short period of time, it became obvious that the remedy worked. The magazines functioned perfectly even after extended time periods when so loaded. In fact, though they’re the old type that didn’t drop freely from the weapon, I still have four of them and even after thousands and thousands of rounds, and they still work reliably.

As the initial phase ended, I noted that the front sight had holster worn to the point where it was no longer square, making a good sight picture difficult. The corrective process was easy—I replaced it (and the rear sight) with a new set of Trijicon tritium 3-dot sights.