0
SHARES
27
VIEWS
Share on FacebookShare on Twitter
The TSG-22 consists of a slide, match-grade barrel, captured recoil spring assembly, and a polymer mag (not shown here). It is designed to be installed on a Glock in a matter of minutes.

If you are into .22 caliber pistols and rifles, then you are probably familiar with the name Tactical Solutions. In 2002, the company introduced its Pac-Lite replacement upper for the Ruger MK series of pistols (see page 39). Since that time, it has expanded the product line to include the Trail-Lite for the Browning Buckmark and a line of replacement barrels for the Ruger 10-22. In addition, the company offers its own 1911 and M4 conversion units along with its excellent X-Ring receiver rifles. Along the way, it also found time for a number of accessories and a line of suppressors.

TSG-22 System
One of the company’s more recent offerings is the TSG-22, a dedicated Glock 17/22 .22 LR conversion unit. The TSG-22 consists of a slide, match-grade barrel, a captured recoil spring assembly, and a polymer magazine in either 10- or 15-round configurations. The TSG-22 slide is manufactured from aluminum with a hardcoat Telfon anodize. A steel firing pin assembly is secured into the rear of the slide and contains the striker, firing pin safety and extractor. The ejector is mounted on a long arm that is attached to the barrel. As with other Tactical Solutions products, the TSG-22 is available with an extended/threaded barrel to accept a suppressor. 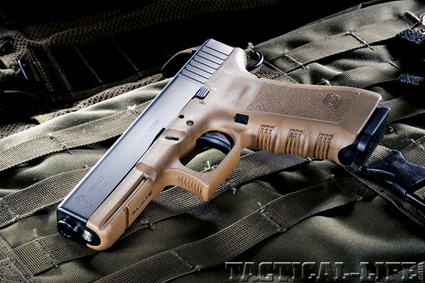 The TSG-22 can serve several functions. First, it provides a great training platform for the novice shooter. The .22 LR is not only less expensive than 9mm or .40 S&W ammunition, but the recoil and muzzle blast are almost non-existent. Second, the unit enables shooters to conduct training in environments that may not be suitable for centerfire ammunition. Finally, it makes a great plinker and is just plain fun—fun that is multiplied exponentially by the addition of a quality .22 suppressor.