The Glock 22 RTF (Rough Texture Frame) is a new version of the Glock 22 in .40, introduced January 2009. The “texture” on the 22 RTF is a series of raised, tapered points called a “polymids,” a newly-coined word from Glock. They cover the entire gripping surface, including the dual-sided thumb rest depressions. The accessory rail remains, as do the finger grooves but now with a lesser height. 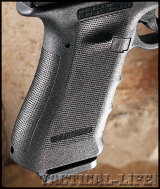 The polymid treatment gives a more positive gripping surface as best I can determine after rapid-fire shooting of my own pebble-grip G22 and the new G22 RTF. The new gun has less “squirm” in your hand. Contrary to what I’ve read elsewhere, the polymid did not remove any skin. On this point, while certainly possible, it reminds me of similar comments made when the .44 Mag cartridge and Smith & Wesson’s M29 were introduced. Some pundits opined that when firing this combination, the fierce recoil would surely shred the shooter’s hand. (Of course, it didn’t.)

Another noticeable change is the slide’s grasping grooves. Formerly vertical, these are now crescent-shaped with the openings facing rearward. This was done to correct hand-cutting problem. These vertical grasping grooves do have somewhat of an abrupt lower edge and for someone shooting with a high grip or with large hands, the grooves can drag over their shooting-hand thumb. In fact, a friend of mine had a bit of a knick from the action.

Another noticeable change is the slide’s grasping grooves. Formerly vertical, these are now crescent-shaped with the openings facing rearward. This was done to correct hand-cutting problem. These vertical grasping grooves do have somewhat of an abrupt lower edge and for someone shooting with a high grip or with large hands, the grooves can drag over their shooting-hand thumb. In fact, a friend of mine had a bit of a knick from the action.
A close examination of the G22 RTF reveals other, subtle changes. Historically, the lower front edge of the front strap had a half-moon cutout, which aided in removing the magazine. When using early non-drop-free magazines (which were deliberately designed this way), the half-moon cutout did facilitate magazine removal, but it is not necessary as most of the drop-free magazines do just that, or at least have enough of the magazine sticking out to be easily grabbed for removal. Depending on your hand size and how you might hold the gun, the cutout could be annoying, as one’s little finger often rode on the edge of the cutout. Finally, the frame proper is thicker overall.

There are two performance enhancements. The locking block’s legs have more of a radius to improve functioning, as is also the case with the #8 magazine follower for the .40 caliber, both done to jointly address a wider range of cartridges, which have various bullet designs and velocities.

There is a factory control number imprinted on the top left center of the frame, which specifically identifies the make of this component. As a backup to this number, there is a cluster of dots inside the top rear of the frame (not visible unless the trigger group is removed), which can be decoded to provide the same information. The serial number window is now free of any polymer overhang making it easier to read.

There have been other manufacturing changes over the production history of Glock pistols, as the company has simply integrated any product improvements or corrective actions into ongoing manufacture. Glock also goes an extra step. When a handgun is returned for service or is encountered in the field for inspection or service by a factory armorer, any such changes are done without charge.

Shooting Impressions
Testing at the range indicates that the G22 RTF is accurate. I’ve been told the factory standard for a 25-yard, five-shot group is 4-inches and this one well exceeded that. My groups ran from 1.50 inches with Winchester, to 1.75 inches with Black Hills and Hornady ammunition.

The Glock 22 RTF has already made a mark out there as this press release notes: “… The Escambia County (Florida) Sheriff’s Office was the first local agency in the United States to convert to the G22 RTF, while at the same time the Louisiana State Police and Louisiana Department of Public Safety purchased 1,300 G22 RTF and G17 RTF pistols, which has made them the first state agency to convert to both RTF series of Glock pistols.”

It’s safe to say that based on the above, that the RTF treatment is going to be the new standard for some, if not all, Glock handguns in the future.

For those readers not familiar with Glock’s products, here’s a little history. Gaston Glock created the first Glock gun in 1980. Creation of the pistol was in response to the Austrian Army’s desire to have a new handgun for its military. Mr. Glock, was an Austrian manufacturer of polymer products, among which was a military accouterment for carrying hand grenades. He learned of this request and in short, with no previous firearms manufacturing experience, set his mind and will to creating a new handgun. Remarkably, he did so in just two years and his handgun entry took over the market of other long-established handgun makers. The trials were quite long and thorough.

Final Notes
From this relatively short time frame, Glock pistols are now available in .380 ACP, 9mm, .357 SIG, .40, 10mm, .45 ACP and .45 GAP (Glock Automatic Pistol) calibers. They have passed the 4,000,000 mark and is in use worldwide, adopted by military and law enforcement entities as well as the legally-armed public.