It was a gun conceptualized to meet the demanding criteria of an elite law enforcement unit. Every feature and enhancement is purpose driven-designed to meet the rigors of hard use and training. It is a no-nonsense gun whose beauty is in its utilitarian function. I am talking about Guncrafter Industries’ new American pistol—a hand built 1911 that is expertly assembled from the finest materials. 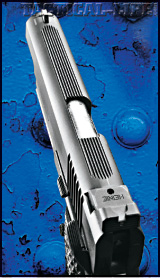 Everything about the gun seemed just right to me. It had a flat top slide, night sights, checkered front strap and mainspring, magazine funnel, integral light rail, upswept beavertail and an ambidextrous thumb safety. Finished in a flat, non-reflective black the gun’s appeal to me laid in its “industrial” cosmetics and its tough-as-nails work ethic. Firing several magazines through the gun convinced me that I needed to own one.

Owner Alex Zimmermann explained to me that this was the commercial version of a pistol that had been commissioned by an East Coast state police SWAT team. Operators dictated the rugged features, so it made sense for those that wanted a hard-core, commercially available 1911-style pistol.
Zimmermann is no novice shooter. For years he traveled from his native Denmark to shoot some of the biggest money matches here in the United States like the Steel Challenge, Second Chance and World Shoot Offs. But according to Zimmermann, “The ever-tightening gun ownership climate in Europe was my reason for leaving Denmark. I was a self-taught gunsmith and firearms dealer there, and I felt like I couldn’t live and breathe under that system. It was very oppressive to someone that has the interest in guns that we have!”

His experience shooting and building 1911 pistols also helped him land his first job in the United States. “I interviewed with Bill Wilson and went back to Denmark sold all of my earthly possessions and three or four months later stood at the Springfield, Missouri airport with my suitcase. It was a big jump and all happened very fast.”

“I was the imported engineer at Wilson Combat. I was their director of research and development for over eight years. My educational background is mechanical engineering. After leaving Wilson Combat I worked under the radar as a custom pistolsmith for a year and a half before starting Guncrafter Industries.”